The Myth of Moqtada 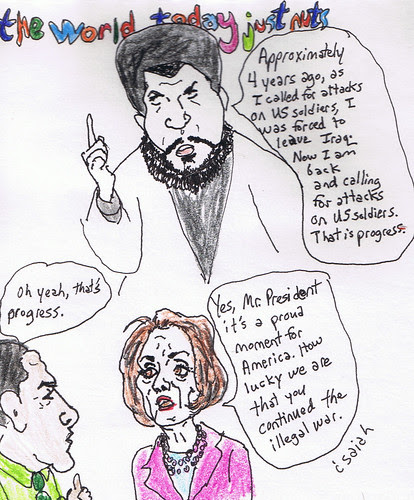 From the start of this year, that's Isaiah's The World Today Just Nuts "What Passes for Progress" featuring Moqtada al-Sadr (and Barack and Nancy Pelosi).

"Where do broken hearts go?" Whitney Houston once asked. A lot of the faux left that sat on their asses for the last years have no doubt gone to a dark room to boo-hoo in private. Al Mada reports Moqtada al-Sadr has declared a halt to all military operations against US forces. They quote Moqtada's spokesperson stating that if the US does not withdraw by the end of 2011, the attacks will resume.

KUNA also notes the news: "In a statement, Al-Sadr said out of keenness on stability of Iraq coupled with withdrawal of the American forces "I am obliged to halt military operations of the Iraqi resistance until completion of withdrawal." But Al-Sadr warned the US forces against failing to pull out." Michael S. Schmidt and Zaid Thaker (New York Times) add, "It could not be independently confirmed that the statement was from Mr. Sadr."

So many on the faux left have sat on their pampered asses thinking 'blessed' Moqtada would save them. No need for them to call for an end to the illegal war, especially with St. Barack in the White House, let Moqtada do all the heavy lifting.

But Moqtada al-Sadr is as big a fake as they are.

At best, the last eight years have demonstrated Moqtada's the parent saying, "You kids better settle down back there or I am pulling this car over. I mean it this time. This is for real." Only to not, of course, pull the car over.

When has Moqtada ever followed up on any threat? Even when the US and Nouri's forces were attacking his followers in Basra, he ended up caving. (Sadr City in Baghdad rose up in protest to the attacks. In response, Nouri's forces moved in there as well. How upsetting it must have been for the residents to see Moqtada turn tail yet again.)

He has threatened over and over. He never follows through. His bark has always been worse than his bite -- in fact, does he even have teeth?

Anyone paying attention to Iraq is aware that Moqtada threatened violence if the UN mandate was renewed at the end of 2006. It was. No new violence from Moqtada. He threatened the same if it was renewed at the end of 2007. Again, no violence from Moqtada. In 2008, the SOFA replaces the UN madate (and it's a three-year agreement, not a yearly one) and guess who threatens violence? Right. And guess what follows? Exactly.

But the myth of Moqtada was important to the faux left because it always gave them the excuse that the war would end without they're having to get off their asses and actually do anything. And the press loved Moqtada. He was the gay actor splashed on the cover of Vanity Fair as a 'ladies' man' providing oohs-and-ahs until his movies came out and Americans realized he couldn't act. (They never caught on how he got the job that propelled him onto the cover of Van Fair, did they? The casting couch is not a thing of the past.) Everything about the actor was invented. A complete press creation. Not unlike Moqtada except the press has a great deal more vested in the creation of Moqtada. (That might change if he had to sell tickets.)

And no one ever calls out his caves. Hey, remember how he was going to let his followers decide who the Sadr bloc would support for prime minister in 2010? Remember that? He held a referendum. Who did they not want? Nouri.

And remember how after he kept insisting he would never support Nouri for prime minister. (Nouri had attacked him with the Iraqi military, after all.) But, remember, by the time October 2010 rolled around, Moqtada was solidly on board with Nouri remaining prime minister?

How many times do you go back on your public promises before people stop taking them seriously?

Al Mada reports that US military spokesperson Jeffrey Buchanan has declared that the Iraqi security situation is not what Iraq wants or deserves." He adds that the Iraqi are uanble to secure the country and that a period of training is needed. Kurdish MP Sardar Abdullah is quoted stating that a withdrawal now would lead to turmoil while a member of Sadr's bloc is quoted stating that 'trainers' are okay if they're really just trainers.

Now for Dumb Ass Squawking: Stephen M. Walt. Walt incorrectly credits Fox News' Tuesday scoop (the 3,000 soldiers remaining in Iraq option) to the New York Times. That's bad enough. Then he writes as though he just learned of the militarization of diplomacy (putting the war operation under the US Embassy in Baghdad -- soldiers and contractors though, no surprise, Walt's missed out on the soldiers aspect -- but then I never saw his ass attending any of the Congressional hearings on this topic this year). But then he really wants to flaunt his ignorance. See if you can pick it out:

My question is: Whom do we think we are fooling? Surely not the Iraqis, who aren't likely to see much difference between U.S. soldiers and U.S. "paramilitary security contractors." Indeed, the Sadrist movement has already denounced these plans, and is holding a major demonstration in Baghdad today to demand a complete U.S. withdrawal. And we aren't fooling the remaining anti-American extremists in the rest of the region, who believe that the United States is an aggressive imperial power seeking to dominate the region with military force and who will use our remaining presence-no matter how it is camouflaged-as a recruiting tool.

Yes, he pins his hopes and dreams on Moqtada. What a fool. But in this blog post at Foreign Policy published yesterday, he declares that the Sadrists are "holding a major demonstration in Baghdad today" -- oh, you sad, sad man. Originally Moqtada was going to participate. The consensus of the State Dept is that he thought he could piggy back onto the September 9th protests (organized by non-Sadrists) but then realized his promise of "millions" would not be covered by the demonstrations planned. So he backed out. It was part of his backing away from the call of the no-confidence vote in Nouri (he and his block had agreed to that vote but backed away the minute the news got out).

Moqtada and his minions did not take to the streets in Baghdad. Stephen Walt has bought into the Myth of Moqtada and looks like an utter fool as a result. Did he not watch any of the footage of Friday's protests? Hey, Dumb Ass, would they be changing the name of Friday's protest to "We Are All Hadi al-Mehdi" if it was a Sadrist protest? No.

Walt's also a dumb ass for not knowing that the 3,000 option is one of several options the White House is considering. All week AP's been reporting on "options" (plural) -- even if NYT couldn't be bothered. Phil Stewart (Reuters) observes, "Sources tell Reuters the Obama administration is now considering options including a training force as small as 3,000 troops in the country. Obama's Democratic base may still feel that is too many and Republican critics say that number is too few to guard against a dangerous escalation in violence." Options. See. There are many. The 3,000 is only one of them.

From yesterday's snapshot, "Meanwhile there's a battle going on between Nouri and members of Parliament. Dar Addustour reports Nouri is attempting to force out Judge Rahim Ugaili as the chair of the Integrity Commission. At Nouri's request and under intense pressure, Judge Ugaili tendered his resignation and Parliament is saying not so fast. Ugaili ticked off Nouri as a result of his investigation of alleged corruption among government officials and Nouri wants Ugaili out so that he (Nouri) can go public with files on his political opponents while ensuring that members of his own Cabinet -- who do have files as well -- will not be revealed publicly." AFP reports that Nouri has accepted the forced resignation. Aswat al-Iraq reports:

The Independent Legislature of the Iraqi Parliament, Sabah al-Saedy, has charged Prime Minister Nouri al-Maliki with being behind the resignation of the Chairman of the Integrity Commission, Rahim al-Ugeily, from his post, because he had demanded Ugeily to what he had described as "opening unrealistic integrity dossiers."
"The reasons that made the Chairman of the Integrity Commission, Rahim al-Ugeily, to resign from his post, had been his refusal to open unrealistic corruption, false and fabricated dossiers against political personalities, I announce two of their names only – Jawad al-Bolany and Ahmed al-Chalaby," Saedy told a news conference, attended by Aswat al-Iraq news agency, charging that "the demand had been presented by the ruling party."


Raheem Salman (Los Angeles Times) adds, "Uqaili's supporters said he was frustrated by political conflicts that kept him from cracking down on corruption, no small problem in Iraq. In its 2010 rankings, the group Transparency International ranked Iraq as the fourth most corrupt country in the world."


We'll close noting Michael S. Schmidt's "Many Iraqis Have Second Thoughts as U.S. Drawdown Nears" (New York Times) where Schmidt interviews a cross-section of Iraq and finds some are less sure US forces should depart.