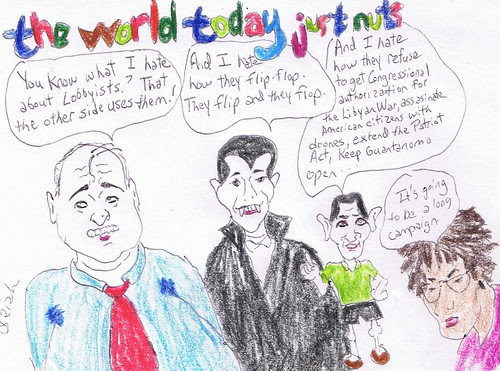 Isaiah's latest The World Today Just Nuts "The Projection Message." David Axelrod declares, "You know what I hate about lobbyists? That the other side uses them!" David Plouffe declares, "And I hate how they flip-flop. They flip and they flop." Bringing up the rear, Barack insists, "And I hate how they refuse to get Congressional authorization for the Libyan War, assassinate American citizens with drones, extend the Patriot Act, kep Guantanamo open . . ." Leading Valerie Jarrett to observe, "It's going to be a long campaign." Isaiah archives his comics at The World Today Just Nuts.