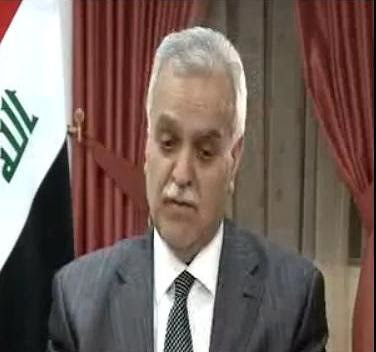 Today Iraq's Sunni Vice President delivered a speech from Erbil denouncing charges against him and stating he would not be tried in Baghdad, that the trial should be moved to Kirkuk and that, if it wasn't, international observers should take over. Sky News observes, "It now also threatens to draw a new wedge between Prime Minister Nouri al-Maliki, a Shi'ite, and Kurdish leaders in Iraq's north who refuse to hand over al-Hashemi for trial."

Tareq al-Hashemi (above) is one of Iraq's three Vice Presidents. Three. There's a spot vacant because someone who couldn't stand the government corruption or Prime Minister Nouri al-Maliki's inability/refusal to address it retired over the summer, Shi'ite Adel Abdul-Mahdi. Tareq al-Hashemi is a Sunni and a member of Iraqiya, the political slate that came in first in the March 2010 elections (Nouri's State of Law came in second). Tareq al-Hashemi and Adel Abdul-Mahdi were also vice presidents from 2006 to 2010. In December, after multiple photo-ops with US President Barack Obama, Nouri returned to Iraq and quickly ordered the homes of his political rivals circled by tanks -- a detail the US press 'forgot' to report for at least 24 hours (most estimates are 48 hours). The bulk of US forces had left Iraq when Nouri made his move (a detail international observers are stressing). He began calling for Deputy Prime Minister Saleh al-Mutlaq to be stripped of his office. Like al-Hashemi, al-Mutlaq is also Sunni and also a member of Iraqiya. In October, Nouri had begun ordering the mass arrests of Sunnis on the pretext that he had information of an impending coup attempt. There was no attempted coup and none planned. Those inside Nouri's Cabinet have been loudly whispering to the press about that.

Sunday December 18th, Tareq al-Hashemi and Saleh al-Mutlaq, along with bodyguards, attempted to leave out of Baghdad International Airport for the KRG (Kurdistan Regional Government -- three semi-autonomous provinces in Iraq). Nouri's forces pulled all off the plane and detained them for approximately an hour before allowing some bodyguards and al-Hashemi and al-Mutlaq to reboard. The next day, December 19th, Nouri issued an arrest warrant for al-Hashemi whom he charged with 'terrorism.'

al-Hashemi did not 'flee' to the KRG. He went there on business and could have been stopped if Nouri wanted tos top him. A day after he arrived, an arrest warrant was issued and he elected to remain in the KRG. He has been the guest of Iraqi President Jalal Talabani and KRG President Massoud Barzani. He has noted that many believe Nouri controls the Baghdad judiciary and first asked that the case be moved to the KRG (refused) and then that it be moved to Kirkuk. He's also been stating that international observers were needed. And despite the inept reporting today of a lazy and uninformed press, that call didn't initiate today -- as this February 10th Alsumaria TV report indicates.

Thursday the 'independent' Supreme Court in Baghdad issued a finding of guilt against Tareq al-Hashemi. Was a trial held? Because Article 19 of Iraq's Constitution is very clear that the accused will be guilty until convicted in a court of law. No. There was no trial held. But members of the judiciary -- who should damn well know the Constitution -- took it upon themselves not only to form an investigative panel -- extra-judicial -- but also to hold a press conference and issue their findings. At the press conference, a judge who is a well known Sunni hater, one with prominent family members who have demonized all Sunnis as Ba'athists, one who is currently demanding that a member of Iraqiya in Parliament be stripped of his immunity so that the judge can sue him, felt the need to go to the microphone and insist he was receiving threats and this was because of Tareq al-Hashemi, that al-Hashemi was a threat to his family.

Having already demonstrated that they will NOT obey the Constitution, the judiciary then indicated -- via the judge's statement -- a personal dislike of Tareq al-Hashemi. What they did Thursday was demonstrate that Tareq al-Hashemi had always been correct in his fear that he would not receive a fair trial in Baghdad.

Saturday, the vice president announced he would deliver a speech on the charges and 'findings' within 48 hours and he made that speech today. Pakistan's Daily Times noted the speech was a half-hour and that he called on "all honest Iraqi people" to join him in rejecting the charges. Yara Bayoumy, Ashmed Rasheed, Patrick Markey and Alastair Macdonald (Reuters) quote al-Hashemi declaring, "All of these accusations against members of my protection detail are a black comedy." He repeated his belief that a trial should be held in Kirkuk and stated if that did not happen the his next move would be to "turn immediately to the international community." Reuters says he didn't elaborate. Maybe he didn't realize that his past remarks had not been covered by Reuters and others?

Human Rights Watch issued a report this month on the deterioration of human rights in Iraq and the push towards an authoritative state noting the continued use of forced confessions. February 10th, al-Haheshmi told Alsumaria that Human Rights Watch's fears are easily understood and noted that his own bodyguards had been tortured into making 'confessions' against him. Aswat al-Iraq readers will be less confused than Reuters readers because Aswat al-Iraq offers more than a partial quote: ""If this proposal [transferring the case to Kirkuk] is not accepted, it will mean that the Judicial Council is determined to deprive me of my rights, and then I will resort to international community," "

Reuters plays dumb on a great deal. They don't note that today Tareq al-Hashemi not only again repeated that his bodyguards had been tortured but stated he was in possession of photos demonstrating the torture. Al Jazeera quotes him stating, "We have pictures of bruises on their faces and bodies." AFP gives the full quote as, "All the arrested people from my bodyguards and the employees of my office are being held in secret prisons over which the ministry of justice has no authority, and confessions are being taken from them through torture. We have pictures and evidence proving that the bodyguards were tortured, physically and psychologically." CNN's Mohammed Tawfeeq reports:

Al-Hashimi criticized the investigation, saying, "How come they finished investigating 150 cases against me and my bodyguards within a few days?
"Where did my bodyguards plan for these 150 attacks? On the surface of the moon?" he asked.

Aswat al-Iraq notes that the Baghdad judiciary is making noises about trying the vice president in abstentia and Lara Jakes and Yahya Barzanji (AP) offer, "Al-Maliki and Kurdish regional President Massoud Barzani have had a rocky relationship for years over how to share disputed land, oil revenues and federal funding. Barzani has shown no indication that he plans on handing over al-Hashemi to Baghdad, and officials in Irbil say doing so could worsen sectarian tensions between Sunnis and Shiites."

#Iraq VP #Hashemi - his guards being held in secret prisons in Baghdad, not allowed access to defense lawyers, says Iraq in grave danger.

Where's the major US dailies coverage? Oh, they can't be bothered. Remember Anthony Shadid soaking up 'local color' and mingling with the locals passed for the height of "foreign correspondence" (well, it was closer to letters home than actual reporting) as he conveyed the "essence" and ignored the facts (thanks, David Ignatius, for explaining that to us). See, this is the sort of topic that needs reporting and they're not equipped for reporting. Poor frustrated travel writers. Maybe next time their outlets will send them to the Fiji Islands or maybe a quilting fair in Paducah, Kentucky?


Only AFP bothers to note that employees of Tareq al-Hashemi, besides bodyguards, are also being held. January 30th, Amnesty International issued a call for "Iraqi authorities to reveal the whereabouts of two women arrested earlier this month, apparently for their connection to the country's vice-president. Rasha Nameer Jaafer al-Hussain and Bassima Saleem Kiryakos were arrested by security forces at their homes on 1 January. Both women work in the media team of Iraqi Vice-President Tareq al-Hashemi" and quoted Amnesty International's Deputy Director for the Middle East and North Africa, Hassiba Hadj Sahraoui, declaring, "The Iraqi authorities must immediately disclose the whereabouts of Rasha al-Hussain and Bassima Kiryakos. At the very minimum they should have immediate access to their family and a lawyer." The alert noted that, in the middle of the month, Bassima Saleem Kiryakos phoned her husband to say she was being released, but she was not heard from again and that, in December, she was also taken by Iraqi security forces and beaten.

As a longtime supporter of Amnesty International -- long before the internet -- I can remember how we'd have our cards and letters in the mail (snail mail) to various regimes, knowing that if enough letters and cards arrived, the authoritarian might start to worry a little about how they were seen by the outside world. And if we visited those regimes, we made a point to register our objection knowing that might have some impact. However, those rare times the press picked up on an alert made an even bigger difference than anything else. So now Amnesty International is an established organization, globally known, and you'd think it would be easier for the organization's alerts to receive attention but that's really not what's happened. What's happened is that when it benefits the US State Dept's present goals, US newspapers 'discover' Amnesty International alerts and US outlets ignore the alerts when it doesn't benefit US policy.

Senator Patty Murray is the Chair of the Senate Veterans Affairs Committee. Her office notes the following:

TOMORROW: Murray in Tri-Cities to Hear from Veterans

(Washington, D.C.) -- Tomorrow, U.S. Senator Patty Murray, Chairman of the Senate Committee on Veterans' Affairs, will hold a listening session to hear from area veterans on local challenges and to discuss her efforts to improve veterans care and benefits nationwide. Senator Murray is Chairman of the Veterans' Affairs Committee. Senator Murray will use the struggles, stories, and suggestions she hears tomorrow to bring local veterans concerns to Washington, D.C.

Get Updates from Senator Murray