Kat: Sometimes I just hate Motown. That's what I'm thinking Wednesday night as I'm zooming through Amazon's MP3s. See I bought the Diana Ross and the Supremes boxed set years ago when it came out. It had three discs. Plus a bonus disc. The bonus disc was live tracks. And it was quickly stolen from my place during a party in 2001. So I spent forever on the auction sites until I found it on Ebay and spent twice what the boxed set had cost. Why not just by a new boxed set? At that point, Motown was only selling the set without the bonus disc. Motown's always screwed up and that's why artists like Diana Ross should have sold more than they have.

For example, I see that you can now buy an MP3 album containing every Supremes album of the 1970s. That's after Diana left. You can buy all of those albums -- that most people avoided in real time -- and avoided for good reason -- but you can't buy all the Supremes albums from when Diana fronted the group and made it an international music sensation. In what world does Motown's 'logic' make sense? Isn't that a bit like collecting all the 10,000 Maniacs recordings after Natalie Merchant leaves?


I think we all know that Motown needs to release Farewell. That's a live album, the last by the Supremes with Diana. It's their farewell performance in Las Vegas, January 14, 1970. Let me explain how awful Motown is. The kiddies may not remember it but by 1984, CD sales were on the rise. By 1986, the shit was pronounced (from cassette to CDs). There were magazines published listing various groups and the CDs that they had. It was a CD boom. Anything you could put out by a name artist had a chance of selling. And Motown's biggest name artists should have been doing great. But Motown execs didn't seem to know who Diana Ross, Stevie Wonder and Marvin Gaye were.

Which is how Farewell comes to be released on CD (under a new title, Captured Live On Stage) in 1992. That's not only after the CD boom where consumers were switching formats and grabbing back catalogue for their collections, but a year after grunge hits. Again, Motown doesn't have a damn clue. (But Motown hasn't been Motown since Berry Gordy sold it in 1988.) A sure seller that also needs to be released is Diana Ross & the Supremes Sing and Perform Funny Girl, and, again, it's a sign of stupidity that this album isn't on the market. Not only does it contain some of Diana's finest performances, it would be purchased by Diana fans, by Supremes fans, by Funny Girl fans, etc.

I could go on and on -- and did, talking to the computer -- but I ended up flipping through other favorite artists and that's how I learned Carole King had just released (Feb. 28th) Welcome Home as an MP3 album. The 1978 ten-song album is currently $9.49 at Amazon. (She's also released it on CD -- first time in the US -- $8.11 at Amazon.) 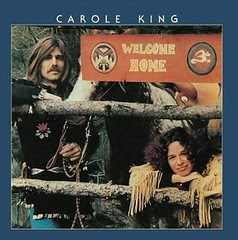 The late seventies weren't a great time for Carole or for Carole fans. 1976's "Only Love Is Real" was the last minute of greatness for Carole on Ode Records and then she switched to Capitol. Her Capitol debut, 1977's Simple Things, went gold and that was strictly on her name because that is an awful album. 1978's Welcome Home might have also gone gold but 1978 is also the year Ode elected to release Her Greatest Hits: Songs of Long Ago. It was the first Carole compilation and it sold like crazy. Not like Tapestry, but like crazy. It did not lead people to also pick up Welcome Home.


"Main Street Saturday Night" not only kicks off Welcome Home but also got a little AOR airplay when the album was released. It's awful. A year before, Simple Things' "Hard Rock Cafe" had made it to number thirty despite being an awful song and maybe Carole thought a sound-alike track could do the same feat? Welcome Home's single proper was "Morning Sun." So she was courting audiences on the one hand with pedestrian rock and on the other with country. If you picked up the album in the stores, you saw "Disco Tech" kicked off side two and you got the point quickly: Carole didn't know who she was.

And that worked for her on 1973's Fantasy when she explored various identities. But there was no unifying theme to the album unless it was tracks that sounded as if they'd been spit-shined and assembly-lined as they prepared to be shipped too Genericville. The playing was too clean.

Most didn't bother to listen (the album made it to 104 on the Top 200). Those who did were treated to two new Carole classics. "Changes" is Carole in the sort of simple vocal she'd use again for "One Small Voice" (1983's Speeding Time) with a simple arrangement, singing about something universal, "In my limited vision, I don't understand, why anybody, has to lose a friend . . ." By contrast, "Venusian Diamond" was pure song craft, a writing exercise, and a successful one, that sounded (as it was intended to) like the Beatles circa 1967 and 1968.

If you're a collector, you'll want to download the album immediately (I did). If you're not but you are a Carole fan, I'd suggest you purchase "Changes" and "Venusian Diamond" for 99 cents a piece and then decide if you're willing to take the plunge.

And Carole fans should take note, April 10th, Carole's A Natural Woman: a Memoir is released. Yes, the notoriously press-shy Carole has written her own story and she's found a voice as natural as the one world fell in love with when Tapestry was released.