Kat's Korner: Bonnie's got another classic 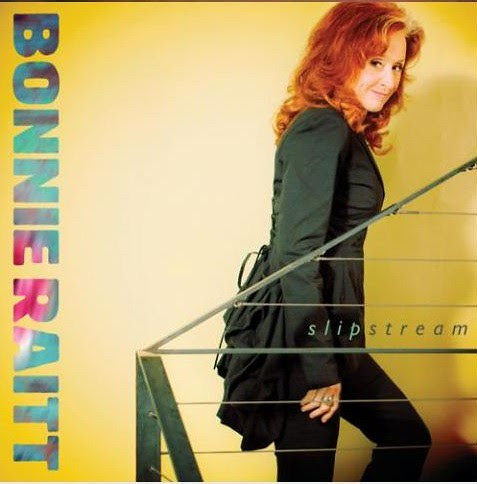 Let the arguing begin.
Not about the value of the album. I think anyone who takes the trouble to listen will agree it's a solid album. They might not, as I do, rank it as the best Bonnie Raitt album ever. But they should appreciate it.
What everyone's going to be arguing over is whether the bring-on-the-party of "Down To You" (co-written by Bonnie) or Joe Henry's album closing "God Only Knows" is Bonnie at her best or the best of Bonnie? Which best represents her?
That'll depend on whether "Something To Talk About" or "I Can't Make You Love Me" was your favorite Bonnie song before Slipstream.
But if you spend less time debating which is the best track to be the next single (the energetic "Right Down The Line" is the first single and, although nice, it's probably the weakest track on the album), and more time listening, you'll find many standouts.
Take "You Can't Fail Me Now." The lyrics to this Joe Henry song include, "I'll rise and fall with you cause you can't fail me now." And Bonnie let's her voice rise and fall on every line, coming in intense on the start of each line and getting softer at the end, like a porch swing with back and forth motion. It perfectly fits the song, so perfectly that you're again reminded that Bonnie doesn't just have a radio friendly voice, she's also one of the most underrated singers, an artist with real skill and instinct.
Her slide guitar work is probably shown best on "Used to Rule the World" where it both struts and mocks creating a tension and release that perfectly suits the lyrics. (Those who want to argue that "Split Decision" is a better showcase for her slide guitar will not face an intense argument from me. It's very close to the quality of the work on "Used to Rule the World.") She brings real life into Bob Dylan's "Million Miles" (from Time Out Of Mind) but it's her work on "Standing In The Doorway" that announces Bonnie is now the best interpreter of Dylan. As I noted Friday, I think downloading "Standing In The Doorway" would convince anyone to purchase Slipstream.
I love the entire album, but the tracks I fell hardest for were the four produced by Joe Henry. The especially good news there is that she has a whole album with Henry producing that she plans to release next. Among Henry's many production efforts is one of my favorites of the 00s, Aimee Mann's The Forgotten Arm. But that's ahead of her. As is an 80-city tour that she kicks off next month.
Right now we've got an album worth of songs from an artist whose been sorely missed, an album of songs that she selected based on the fact that she's eager to play them live. Listen to the vocal and her slide guitar on "Ain't Gonna Let You Go" and you should immediately grasp what's got her so excited. Or maybe just follow her voice as she sings Henry's haunting "God Only Knows."