Lt Gen Graeme Lamb told the BBC News (link is video) that CIA Director David Petraeus' actions that led to his stepping down from the CIA were "inappropriate, unworthy and disappointing."  As the Petraeus scandal continues, it's worth grasping just how lousy Barack's first term was when it came to nominations.

There were the tax cheats and lobbyists and other 'problem' nominations.  If you've forgotten, maybe Isaiah's The World Today Just Nuts "The Rose Ceremeony" from February 15, 2009 will refresh your memory. 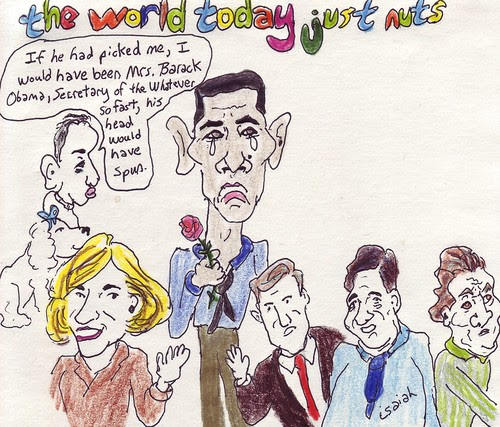 Barack's economic team is a disaster.  His entire Cabinet struggles with the only exception being Hillary Clinton.  Hillary's leaving -- as she announced some time ago.  She's the only one with any stature and the only with popularity.  The others are considered either a disappointment or flat out invisible.  I know Leon Panetta, I like Leon.  I know Hilda Solis and I like Hilda.  And, of course, I love Joe.  But we're not talking about my personal feelings.  We're talking about how they are viewed.  Does Joe Biden even exist to the public except as a campaign app?

Hillary's the only nomination Barack's made that can be pointed to with any level of pride.  So how telling that he's willing to tank his only success.  Senator John Kerry was made for the job of Secretary of State.  He has the international ties already.  He has the knowledge base.  He has the experience.  None of that means he won't be a disaster.  You never know what's going to happen.  You judge by a record, though.  And John Kerry has the record that indicates success.  (I know John Kerry.  I like John Kerry.  This is not about that.  I've called John out here before.)


Instead, he's floating the disgusting Susan Rice.  Isaiah captured her in "Alice In Barackland" last February. 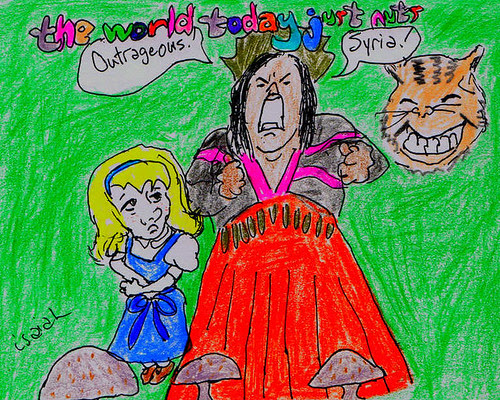 The screaming banshee War Hawk?  That's a face for America?  Remember her  "Outrageous! Syria!"?  And this is when she's the US Ambassador to the United Nations.

Repeating, the only successful nomination Barack made in the last four years was Hillary Clinton.  She's leaving and Susan Rice is who he thinks is the one to fill Hillary's shoes?

There may be someone more qualified than John Kerry to be Secretary of State.  But Susan Rice's record does not indicate that it is her.


Already the whoring has begun.  Hayes Brown delivers the line for the Unethical And Compromised Portion of the Faux Left.  Sorry Whores Hayes, I don't follow your marching orders because my ass has never been for sale and never will be.  These whores at Think Progress should be ashamed of where they work -- at the place started by the man who stopped the impeachment of Bully Boy Bush.  That is at the root of the 'Center for American Progress' and why it will never, ever bring progress.  Nothing grows from those evil roots, nothing good.  A month prior to the start of the Iraq War, US House Rep John Conyers was seriously supporting impeachment for Bully Boy Bush.  He and others had a briefing.  John Podesta screamed and yelled that impeaching Bush would hurt Democrats election chances two Novembers from then.  What would happen to Iraqis?  Podesta didn't give a damn.  Whores never do.

Iraq is our focus.  Some will point to Kerry's "for it before I was against it." That's fine.   I don't make a case for John as Secretary of State based on some wonderful judgment of Iraq.  I look at his record, I look as his knowledge base, I look at his experience.  All the markers break for John.

By contrast, Susan Rice's limited experience and limited knowledge are not indicators that she's up for the job.

Well maybe Susan's got some amazing judgment -- that she concealed from the American people for the last four years, granted -- and that argues for her in this position?

Okay.  Let's see, since she has no real experience to speak of, how  her judgment calls when not in government went?

Most important decision in the last ten years in terms of foreign policy?  Where you stood on Iraq.  In 2003, Susan Rice did not hold elected office.  Like Al Gore, she had nothing to lose by telling the truth.  Al Gore, you may remember, spoke out against the impending war.  He was not the only Democrat to do so.  Susan had no political office, didn't have to worry about a vote.  She could speak her mind and do so freely.

And what did Susan say?  Oh, that's right:

Well, I think he [Colin Powell] has proved that Iraq has these weapons and is hiding them, and I don't think many informed people doubted that. But whether he's made the case for war, I think, is more complicated. He certainly made the case that if the United Nations fails to act, then they will have essentially set aside their own resolutions and begun to make themselves irrelevant. But I think the problem is that many American people are not convinced that going to war against Iraq will actually make us in the United States safer. I think they fear reprisals and attacks. I think they think that our homeland is not yet secure and that with developments in the Middle East and al-Qaeda still very much on the loose, there are many, I think, who fear that going to war against Iraq may, in fact, in the short term, make us less secure, rather than more secure.

So Colin made the case, did he?  Colin Powell lied to the United Nations -- his "blot," remember?  This wasn't a huge secret that emerged years later.  It was known within hours that he lied.   He lied to the UN on February 5, 2003.  The next morning, at 7:00 a.m. EST, Amy Goodman's Democracy Now! began airing live:

Susan Rice made her statements quoted above, many hours after that broadcast aired.  After it was known that "his claims can't be verified."  But Susan Rice argued he'd made the case that Iraq had weapons of mass destruction.  There were NONE.

No.  Clear your head of the Fog Of War Whores.  Susan Rice wanted a UN resolution for legal and political cover.  She was also being belicose about the UN needing to act -- a line that the Bush administration had also been pimping, if you remember.  In fact, she's got all the Bush langague in there "al-Qaeda" -- al Qaeda was not in Iraq until after the US invasion brought them in -- "homeland," blah, blah, blah.

And the Center for American Progress rushes to defend her because they have no ethics.  All they give a damn about is whether there's a "D" by the official's name or not.  That's all they cover 'officials.'  They're suck-up whores to power running a little community newsletter and trying to lay down the law.  Shame on anyone claiming to be anti-war that embraces the whore that is Susan Rice.

John Kerry did not lead the Congress against the proposed Iraq War.  I haven't claimed that he did or made a case for his 'fabled judgment.'  I've noted his years in the Senate have given him tremendous experience.  That doesn't mean, if nominated and if confirmed, he would be great in the job.  That would be a predicition and I can't make that.  But the indicators are there that he has the skills necessary.

But her record -- not just with Iraq -- time and again is as a War Whore.

It's really amazing that Barack keeps finding these pro-Iraq War types to nominate, by the way.

No wonder there are no real accomplishments, after four years, that can be pointed to with pride.  The White House is completely incompentent.  Barack didn't get a mandate.  American didn't deliver the House to the Democrats.  The country disapproves of the Congress and the White House in equal measures and a fight over Susan Rice is only going to increase those feelings.

Susan Rice made idiotic statements.  She's responsible for those and most Americans will not approve of her for Secretary of State as a result.  The Center for American Progress is 'on board' -- as is Rachel Maddow -- with 'reforming' Susan Rice.  That says everything you need to know about their lack of ethics and scruples.

And it also explains, doesn't it, the silencing of the peace movement.  It's not the right wing oppressing us, it's our supposed 'allies' and 'friends.'