Kat: As 2012 draws to a close, my friend Sumner has finally gotten into downloads.  He'll go to iTunes or Amazon and download digital versions of albums he already has but, if it's something new, he'll call me or another friend and ask, "Is it worth having?"  He's also become, Toni feels, something of a download addict in need of a daily fix.  He called me last week in a panic.

Should he, he really likes the Stones, so should he, he's got all their albums on vinyl or CD, so should he go ahead, since they've got that new album, and it is their 50th anniversary, right?, so he should download that new album and that's a whole other problem because of the various versions but, as a Stones fan, he should download GRRR! right? 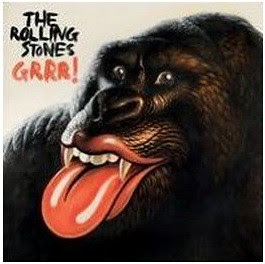 More than any other Stones album, GRRR! makes the case that Allan Klein was an indispensable part of the band.

Let's deal with what GRRR! is first?  Another attempt to draw blood from a stone, the Stones latest hits collection comes in a 40-track version, a 50-track version and an 80-track version -- all determined to argue that the band should have retired at the 21-year point.

GRRR! follows such Stones collections as Big Hits (High Tide and Green Grass), Flowers, Hot Rocks 1964 - 1971, More Hot Rocks, Made in the Shade, Sucking in the Seventies, Rewind, Singles Collection: The London Years, Jump Back and Forty Licks.  And those are just the ones that sold.

Klein wasn't Brian Jones and I'm not arguing that the manager fired by both the Stones and the Beatles was a huge help in live sessions or could come up with a riff.  What I'm saying is Klein knew how to market a band.  After they ditched Klein, they'd end up with Atlantic Records at a time when Ahmet Ertegun was still actively involved in the label and Ertegun would do his job and then some.  But then the Stones left Atlantic for CBS (now Sony) and gone were the days of anyone telling them anything.  Sony just wants product to sell.  They don't care about anything else.

Mick Jagger is the perfect fit for Sony.  People talk about his supposed business smarts -- supposed because business smarts shouldn't result in either Freejack or The Knights of Prosperity, right?  Wrong.  Because those artistic nightmares were meant to bring in cash and they did.

They're artistic failures, embarrassments to someone's resume but they sold, they brought in money and that's all Mick Jagger or Sony care about.

Allan Klein, seen as ruthless, had more artistry and artistic vision than Mick Jagger did or does.  (The same was true of Ahmet Ertegun.) That's what really stands out on GRRR!


Most listeners will buy the 40-track version.  Not just because it's cheaper, but that's one reason.  Another is CDs continue to sale and the Stones have gotten the CD into Wal-Greens and other stores where impulse buys at the check out stand should help them.

Excuse me, help them steal a little more coin.  Not help them artistically.

Allan Klein would never have allowed it.  Ahmet Ertegun would have grasped the artistic message this would send.

But Sony and Mick Jagger -- who have cash registers where their hearts should be -- only care about stealing your pennies right now.  They don't care about tomorrow.  They're not interested in tending a legacy.  Just grab the cash and run out the door.

In the 'early days' of Stones best-ofs, the first twenty years, it was understood that you included the big hits and you included other songs.  "Jumping Jack Flash," for example, was a big hit with a great riff.  But part of the reason it is known today by listeners under the age of 40 has to do with it being on nearly every compilation the band has put out.

"Out of Tears," "Love Is Strong," "Blinded by Rainbows"?  Any of those tracks would be featured on this collection if someone were trying to build the band's legacy and not just collect pennies.  In fact, if art and not greed were the motivating factor, many of the outstanding tracks from A Bigger Bang would have been included.

People like what they know.  The collections are a chance to pair the candy the listeners want with some treats they didn't taste properly the first time around.  Including tracks from A Bigger Bang and other recent albums means the audience isn't screaming at every concert just for sixties oldies.

GRRR! argues not just that the Rolling Stones are no longer pertinent but also that they've spent nearly 30 years living off the oldies circuit.  I praised A Bigger Bang when it came out but, in the years since, I've repeatedly noted how the album has continued to grow on me.  I really see it today as one of the band's major artistic statements and it's really sad that I'm willing to go out on a limb and make that argument but Mick Jagger's unwilling to fight for the album or even spotlight it on GRRR!

Not one track from the album appears on GRRR! despite the fact that it's the band's last studio album.  No "Sweet Neo Con," no "Rough Justice," no "Rain Fall Down" and no "Biggest Mistake."  The album was heavily praised, made many best-of-the-year lists but not even one track shows up on GRRR! 40-track edition.

GRRR! grabs your pennies but, as it does, it assures that the Stones have nothing to show for the last years and nothing that's mattered since 1983.  That may sell this collection but it really harms the band and waters down their legacy.  A little less concern about making cash and a little more about expanding the legacy is sorely needed because another release like GRRR! and the Stones are going to be just another oldies act with about the same level of pertinence as The Cowsills.