Kat's Korner: Shannon with a side order of Clams 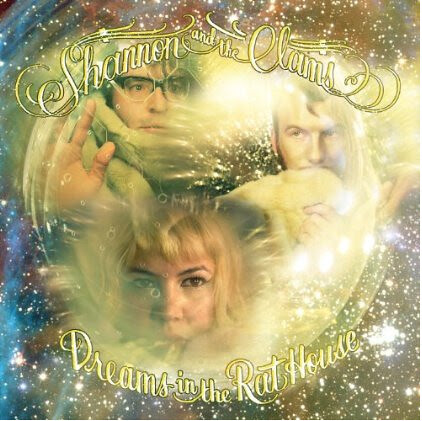 Kat: Shannon and the Clams are an Oakland garage rock band whose latest album, Dreams in the Rat House, came out earlier this month.  Shannon Shaw plays bass, Cody Blanchard plays guitar and Ian Amberson plays drum -- or played -- he's already departed the band.  All sing although Shaw's voice is the dominant one.

And Shannon can wail.  It's that voice that really helps bring their nods to girl groups into the 21st century.  They specialize in songs that lyrically nod to the death anthems of "Tell Laura I Love Her" and "The Leader of the Pack."  In terms of the sound, it's similar to the groove Blondie was working in "In The Flesh" but a lot more low-fi.

"Rip Van Winkle" is the album's masterpiece with the joyous shouts of "Hey!" and the boistoerous drum fills.  But there are no clinkers here.  "Into The River," for example, calls to mind all the Etta James Beyonce was trying to channel into her "At Last" cover but never managed to.  "If I Could Count" is great goofy fun from the work-chant to the Nancy Sinatra-style production.


Shannon Shaw and Cody Blanchard are the songwriters so the focus will likely remain the same but it's really hard to listen to, for instance, "Unlearn" and imagine any other drummer layering so many loving accents to the tracks.

The accents really are important here -- not just the drums, but the chants, the additional instruments.  This is a 'record' in the sense that people used to say Phil Spector makes 'records' -- meaning, something more went on than a band went in the studio and laid down a track and left.  These are carefully arranged and wonderfully produced.  Just listen to all that's going on when Shannon and Cody are singing "I hate to wake up when everyone is gone" in "If I Could Count."  That Shannon and the Clams are a great live band is no secret in the Bay Area but who knew they were a bunch of studio rats as well?

The group's been bubbling under for some time now nationally as a result of their strong live shows and previous recordings.  And I know there are some who just wish the group would re-record variations of "Hunk Hunt."  It's to their credit that they moved beyond that classic and don't try to repeat themselves.

I have no idea where Shannon and the Clams go without Ian but there's no denying that they've recorded an incredible album and that Dreams in the Rat House is one of 2013's finest as the trio shimmers and struts their way through twelve amazing tracks..