Kat:  Hanni El Khatib's Head in the Dirt dropped at the end of April.   It's his sophomore effort, the follow up to his largely ignored Will The Guns Come Out from two years ago.  And if you didn't care for the 2011 release or your world rocked along just fine without ever knowing it, why the hell should Head in the Dirt matter to you now?

I ain't going back where I came from
Been treated like trash where I came from
Feel alive in the street and it feels good
Now my vision is clear
I just need a little something
To get back up on my feet.
And if this don't go well
Got nothing to eat
Nobody moves
And nobody gets hurt


Somehow, I'm doubting Hanni and my shared hometown of San Francisco inspired the above.  But Hanni's Palestinian on his father's side and it's kind of hard not to wonder how much of that is shaping the lyrics and music?

And the music?  For many this will be the reason to snare the album: The Black Keys' Dan Auerbach  produced the album.  They recorded the 11-track album, which clocks in at 33 minutes, in Nashville.  And terms are being tossed around by 'experts' like "garage rock" (yes) and "punk" (no).  And I'm left yet again wondering if these idiots have ever listened to actual music or passed off an 'observation' that didn't come off a music label's hand out? 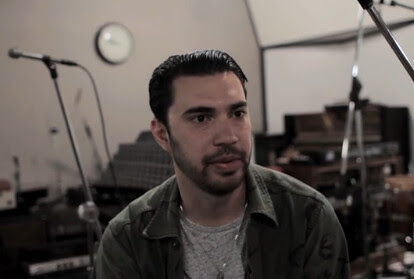 What stands out the most is Hanni's love for the beach music.  Take "Nobody Moves" which is awash with swirling guitars and pounding drums and brings to mind not something the Sex Pistols tried to spit out as they briefly fumbled around on instruments they never mastered.  No, it calls to mind the roar that The Ventures produced so effortlessly, the power of Dick Dale's surf classic "Misirlou."  Or take the vocals on "Penny."  If you're a critic and you're not hearing a nod to "Barbara Ann" or other Beach Boys doo-wop classics, I would seriously question your music cred.

Back in 1966, The Who covered "Barbara Ann."  If they had continued to pursue a merger of garage rock and beach music, Head in the Dirt might have have been what they came up with.  Or maybe where The White Stripes would have evolved to if Jack White's heavy ego hadn't sunk the band?

You're reminded of how much promise was wasted then when you hear Hanni's first track "Head in the Dirt."  "The road to my heart is narrow, covered with oil," he sings over the snakiest bass line since Soundgarden's "Fell On Black Days."

This is a loud album, as though someone on high heard my prayer of "Save us from the hairless chihuahua that is wispy little Justin Timberlake."  If you missed it, that overgrown adolescent showed up at the start of the year with the flaccid "Suit and Tie" which had all the sexuality of a 7-year-old boy wearing his first long pants suit to church.

There are times when Hanni is, frankly, irritating as hell in his lyrics.  Some will insist, "It's blues!  With those classic tales of the deadly woman!" No, it's not blues.  "Not Fade Away" (Buddy Holly's classic echoed in Hanni's "Save Me") has never been mistaken for blues.  He likes riffs, even blues riffs, yes, but to call this blues would be to insult a genre.  Hanni's working with a different pastiche and that's fine.  And that even applies, for now, to some of his lyrics.  He's shifting personalities and doing narratives so I'm willing to see him as the cute but sometimes cloddish boyfriend who will part with those Uggs boots or I'll toss 'em out for him.  And if he shows up in public before I'm able to?  As he sings on the new album "Can't Win 'Em All."

Of all the tracks on the album, my favorite is "House On Fire" and, from the drunk driving to the drunken booty call it should all be so offensive:

Drop me off at my car
I know I'm drunk but it ain't that far
Promise that
I'll get home safe
Can't be talked out of it's too late
And the people will forget it tomorrow
But I know that you still feel hollow
It's dangerous to love each other
With a house on fire
But I know that we can put out the fire
If we try tonight.


But somehow, it's Hanni at his sexiest at the start of the song.  He makes it work and he does work it.  The album may proclaim his Head in the Dirt but where Hanni's fingers are located may be what makes all the difference and provide all that's needed.

"Family" is an infectious single and it's also a free download at Amazon currently.  It will give you a sense of Hanni's voice and basic sound, but I don't know that it really represents the best of Head in the Dirt.  I'm also afraid too many who -- like today's critics -- have never heard beach music will hear it and think, "Score!  Offspring's finally released a decent follow up to 'Come Out and Play'!"  I honestly would have gone with "Pay No Mind" or "Save Me."  I also wouldn't have gone with that cover which neither captures the music or inspires you to purchase the album.  As a professional photographer of many years, that cover is awful.  You can see it here and download the album currently for $6.99.  I've grabbed a screen snap from a video at Hanni's website. Where you can find more things to stream.  Whatever you decide to sample, if you give him a chance, I think Hanni will quickly become the soundtrack of your summer.