On Snowden and meanings


Three former National Security Agency employees who exposed secret government programs defended Edward Snowden during a Thursday event at the National Press Club.
"Manning, Snowden – I stand with them without equivocation," former NSA senior executive Thomas Drake said. Like Pfc. Bradley Manning and Snowden, Drake was charged with violating the Espionage Act. Drake contacted a Baltimore Sun reporter in 2005 about wasteful NSA programs, including the Trailblazer Project, which aspired to snag vast quantities of Internet data, but instead reportedly cost taxpayers $1.2 billion before being cancelled.
The charges against Drake were later dropped.
Certain parts of the government "have become a criminal enterprise," Drake said, and Snowden's only option "was to escape the United States of America." 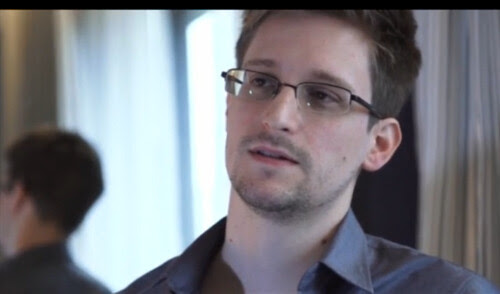 Ed Snowden (above) is an American citizen and whistle-blower who had been employed by the CIA and by the NSA before leaving government employment for the more lucrative world of contracting.  At the time he blew the whistle, he was working for Booz Allen Hamilton doing NSA work.  Glenn Greenwald (Guardian) had the first scoop (and many that followed) on Snowden's revelations that the US government was spying on American citizens, keeping the data on every phone call made in the United States (and in Europe as well) while also spying on internet use via PRISM and Tempora.  US Senator Bernie Sanders decried the fact that a "secret court order" had been used to collect information on American citizens "whether they are suspected of any wrongdoing."  Sanders went on to say, "That is not what democracy is about.  That is not what freedom is about. [. . .] While we must aggressively pursue international terrorists and all of those who would do us harm, we must do it in a way that protects the Constitution and civil liberties which make us proud to be Americans."  The immediate response of the White House, as Dan Roberts and Spencer Ackerman (Guardian) reported,  was to insist that there was nothing unusual and to get creaky and compromised Senator Dianne Feinstein to insist, in her best Third Reich voice, "People want to keep the homeland safe."  The spin included statements from Barack himself.   Anita Kumar (McClatchy Newspapers) reports, "Obama described the uproar this week over the programs as “hype” and sought to ensure Americans that Big Brother is not watching their every move."  Josh Richman (San Jose Mercury News) quoted Barack insisting that "we have established a process and a procedure that the American people should feel comfortable about."  Apparently not feeling the gratitude, the New York Times editorial board weighed in on the White House efforts at spin, noting that "the Obama administration issued the same platitude it has offered every time President Obama has been caught overreaching in the use of his powers: Terrorists are a real menace and you should just trust us to deal with them because we have internal mechanisms (that we are not going to tell you about) to make sure we do not violate your rights."  Former US President Jimmy Carter told CNN, "I think that the secrecy that has been surrounding this invasion of privacy has been excessive, so I think that the bringing of it to the public notice has probably been, in the long term, beneficial."

The more Barack attempted to defend the spying, the more ridiculous he came off.  Mike Masnick (TechDirt) reviewed Barack's appearance on The Charlie Rose Show and observed of the 'explanations' offered, "None of that actually explains why this program is necessary. If there's a phone number that the NSA or the FBI gets that is of interest, then they should be able to get a warrant or a court order and request information on that number from the telcos. None of that means they should be able to hoover up everything."  As US House Rep John Conyers noted, "But I maintain that the Fourth Amendment to be free from unreasonable search and seizure to mean that this mega data collected in such a super aggregated fashion can amount to a Fourth Amendment violation before you do anything else.  You've already violated the law, as far as I am concerned."  Barack couldn't deal with that reality but did insist, in the middle of June, that this was an opportunity for "a national conversation."  He's always calling for that because, when it doesn't happen, he can blame the nation.  It's so much easier to call for "a national conversation" than for he himself to get honest with the American people. And if Barack really believes this has kicked off "a national conversation" then demonizing Ed Snowden is a really strange way to say "thank you."

Curtis Smith (Talk Radio News) notes, "The Senate Appropriations Committee passed legislation Thursday to fund the State Department. The vote was 23-7 to approve the bill, which provides the State Department with roughly $50 billion next fiscal year."  That's blowsy Babsie Mikulski's Committee -- which she runs like a church social as opposed to a real Committee -- part of the reason less and less people take her or her awful Committee seriously.  At 77, her constituents need to make this her final term. Would you trust her to drive?  Honestly?  Nope.  So the last thing this idiot (who voted in 2008 to grant telecom's immunity for Bully Boy Bush's illegal spying) needs is another term in the Senate. She also cut off senators in a recent Appropriations Committee hearing when they attempted to ask serious questions about spying.  She cut them off, she insisted that Dianne Feinstein (whose actions with regards to spying have been criminal) be allowed to speak over others.  It was disgusting -- authoritarian porn badly wigged.  [If you missed that hearing, you can refer to the June 12th "Iraq snapshot," Ava's in "Shut up, Senator Barbara Mikulski," Wally's "Mikulski loves the sound of her own voice (Wally)," Kat's "Senator Susan Collins Eats The Young," the June 14th "Iraq snapshot," and Dona's "Report on Congress."]    Send her home, send her to a retirement home, send her anywhere but back to the Senate.


Wednesday evening, the House of Representative voted on whether or not to end the illegal spying.  205 House members voted to end it but 217 voted to continue it.  Rem Rieder (USA Today) notes the vote  and its meaning:

The top people in Congress on intelligence matters show little skepticism about such initiatives. And the shadowy Foreign Intelligence Surveillance Court almost never met a government request it couldn't embrace.
The agglomeration of massive troves of records about the telephone and digital activities of Americans represents a significant shift in the way we approach civil liberties in this country. It's a decision that needs to be made in plain view, with the input of the American people. At last we are having that debate.
Yes, the Obama administration managed to beat back the measure, which would have limited NSA telephone surveillance to specific targets. In other words, Big Brother could only round up the "telephony metadata" -- who you called, how long the call was, etc. -- when it could show there was a good reason to do so.
But the surprisingly close tally -- 217 against, 205 for -- shows how profoundly the Snowden disclosures have resonated. The fact that there was a vote at all was significant.


For more on the vote, you can see Glenn Greenwald's Guardian piece at ZNet and Joe Wolverine II at the Tenth Amendment Center (a site I'm not familiar with but we were asked to note) and Andrew Levine (CounterPunch) puts it all into perspective in terms of Barack's real legacy..  Next week, there will be a hearing in the House on the spying.  Paul Lewis (Guardian) reports:

Democrat congressman Alan Grayson, who is leading a bipartisan group of congressman organising the hearing, told the Guardian it would serve to counter the "constant misleading information" from the intelligence community.
The hearing, which will take place on Wednesday, comes amid evidence of a growing congressional rebellion NSA data collection methods.

It is high time Russia granted political asylum to Snowden, President of Belarus Alexander Lukashenko told media on 26 July, BelTA has learned.
“The matter has been spun out of control and it is likely that today Russia’s leadership may not know what to do with Snowden. In their place I would not stress myself too much but would go ahead and grant political asylum to him,” said the Belarus President.
Alexander Lukashenko explained his view by saying that America has given shelter to hundreds of Russian traitors. “They have given shelter to so many people, have stolen so many secrets from us, they have sheltered so many terrorists, whose extradition Russia demands,” the Belarusian leader said.