Kat:  My Own Worst Enemy isn't just the name of a Christian Slater TV show that bombed and a hit song by Lit, it's also some artist's personal philosophy.  Case in point, Sam Phillips.

That's Sam Phillips oft repeated chorus to "When I'm Alone."  It's cloying and really requires a ukulele. In fact, you can easily imagine Lindsey Buckingham both writing and recording the song (convinced he'd 'connected) but he'd probably record the uklele with an echo chamber and then play the recording backwards while multi-tracking his chipmunk vocals and then, finally, be perplexed that he'd yet again made a solo recording that failed to sell.

Sam Phillips' career is marked by those moments.

I first came across Phillips in Request magazine.  Anyone remember that?  You made a Musicland or Sam Goody purchase at the end of the 80s or during the 90s and you could grab the 'magazine' for free.  'Magazine' because it was generally fluff.  Every review was about a new release that was the greatest, most awesome, groundbreaking release in the world because . . . Well because Request was just about trying to get you to buy something.  I remember a nice article on Patti Smith and I remember Glenn Frey, at the height of his workout craze, really using the Request interview format to explore music (something few other artists bothered to do).  I remember Bonnie Raitt promoting the heck out of Nick of Time in Request and Carole King doing nothing for City Streets -- two Capitol releases that came out around the same time in 1989.  [I remember a guy at the label in marketing going ballastic that Carole wanted a comeback but wouldn't do publicity.  "Why'd she bother to get Eric Clapton to play on the album if she won't promote it!" I can still hear him screaming into my phone one morning when we hadn't even gotten out of bed and he's just found out Carole had shot down a TV spot.]


Most of all I remember GRRL Rock or whatever they were calling it in 1989 resulting in a Request article pairing her with Lou Ann Barton.  I remember it mainly because I didn't realize Sam was the blond in the photo right away and was instead thinking, "What's the founder of Sun Records doing with Lou Ann Barton?"  Barton was, and is, talented but her solo career never took off and, by 1989, she'd been around for a decade.  So why lump a new artist -- who was just getting her first (and so far only) radio hit in with Barton?

Sam Phillips remained a mystery over the years, never mastering the art of the music interview and becoming increasingly difficult to market as a result.

Aimee Mann?  Musical genius who won't play the corporate game?  Madonna?  Corporate behemoth who fails to connect on an intimate level.   Bonnie Raitt and Mary J. Blige?  Good time gals turned survivors.  On and on it goes, a narrative that crystalizes who someone is.

But Phillips never seemed to know who she was in an interview or on an album.

That's no longer true as Push Any Button, which comes out Tuesday, makes clear. 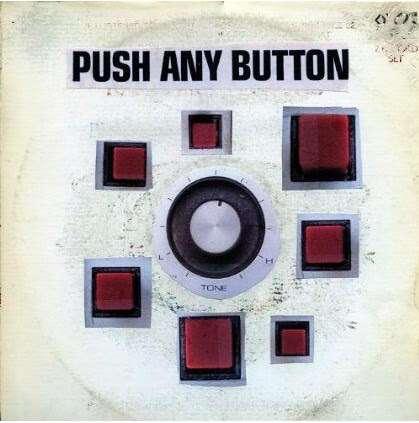 The opening track is "Pretty Time Bomb" which is apparently supposed to be Phillips herself.  She sings,  "It's easy to change your name, harder to change your life."

Yeah, that's the other thing that harmed her.  Alanis might have been able to live down her Nickelodean phase but Sam Phillips emerged in the early 80s, a Christian pop artist who charted in that genre.  And then in 1989, she changed her name to "Sam" and reinvented herself as a secular contemporary artist.  And really didn't want to talk about her past.

There was not a worse time to be a Christian singer than the second half of the eighties.  Not only was Amy Grant a joke to pop listeners except those like Tina Fey into into ponies and horses during this period, even worse you had the spectacle of the PMRC and its efforts to go after Prince, Sheena Easton, Madonna and others still fresh in people's minds.  Sam and her I-won't-talk-about-it came off like someone guarding a deep, dark secret.

So even though each album found her a critic's darling and each albums was overly praised (with a few even deserving the praise), she couldn't catch a break.  She may be destined to be the female Jules Shear -- a talented artist known for his involvement with others (created MTV's Unplugged, the subject of Aimee Mann's 'Til Tuesday song "'J' for Jules," etc.).  And while her work with T. Bone Burnett will remain something of a historical footnote, maybe this is finally her moment.

She's been overly produced pop, she's been alternative, she's been acoustic.  But on the new album, she finally feels authentic.  Even the track I loathe, "When I'm Alone," feels like it's coming from her heart and not her head.  Too much of her past catalog has struck me as being less about music and more about an intellectual exercise.  So it's a revelation to hear her sing, for example, "How can something I can't see or explain be so real to me?" ("No Time Like Now").  She could be referring to anything.  Possibly even God.  Which is okay and maybe refers to a peace she's found with her early non-secular past?

At one point, she sings, "Well the worst thing is that you don't even know my secrets" ("Things I Shouldn't Have Told You").  And she's right but for a change she seems willing to do more than intimate.  She's not asking you to read between lines or being to cute for words.  She's never been this reflective and never conveyed so much meaning or so much emotion.

On Push Any Button, she's sixties in a Chrissie Hynde manner.  She's ripping through ten songs at a fast clip.  "See You In Dreams" is the longest, clocking in at four minutes and twenty-six seconds while "No Time Like Now" is two seconds shy of four minutes.  Everything else is less than three minutes.  It's a way of trimming the fat, returning to the days before artists who write songs realized they made higher royalties on songs that clocked in at over four minutes. And when she does break four minutes on one song, it's a story worth telling.


Sam Phillips has often been amazing but this is where she really connects.  Push Any Button comes out Tuesday and deserves to be her best selling album yet.