Kat: 2013 was a lousy year for music.  Let's hope it's an in-between year and not a sign that music for the near future will be plastic and useless.

There were some bright spots.

The best album of the year, for example.  I have two picks for the year's best.  Let's start with one that came out as the year was starting.

It's an album by a feminist.

She used the album, in fact, to explore her feminism. 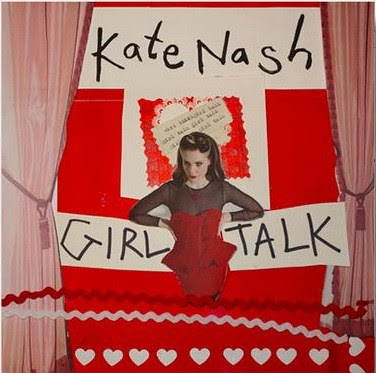 You thought I was going to say Beyonce?

I find that strange.

Just as I find it strange that an actual feminist album, Girl Talk, and its feminist author, Kate Nash, were completely ignored by Ms. magazine in 2013.

They took a false quote -- Beyonce talking about why she wears those barely there outfits onstage and in videos -- and lied that it was Beyonce speaking about feminism.  They also edited out her actual remarks about feminism which made clear she thought feminism was something for lesbians.  If you only heard the false quote and not reality, go read The Third Estate Sunday Review's "Editorial: The 'pro-woman' propaganda dumped on the feminist movement."


On her awful album, Beyonce has a track entiled "Drunk In Love" and it's that track where her husband Jay-Z does a little rap endorsing the abuse and torture inflicted on Tina Turner by her first husband.  At Huffington Post, Frances Cudjoe Waters could observe in "How Did Beyonce Go From Tina Turner to 'Anna Mae'" (Huffington Post).

How do you go from "Since I'm not your everything, how about I'll be nothing?" to having your husband, Jay Z, on your video from your new album saying "I am Ike Turner, Eat the cake Anna Mae" -- a line from a movie that clearly illustrates one of the most vicious wife beaters who almost killed another amazing icon, Tina Turner. It's like in one stroke she undermined Tina Turner's march toward victory and mocked it saying that kind of domestic violence is alright.
My God, it's as if she turned back the clock 50 years in one moment.


But at Ms., we weren't supposed to call Beyonce out.  At a number of 'feminists' insisted to those of us opposed to domestic violence, Black Woman has suffered, Black Woman must be able to speak.

It was about Beyonce.

It wasn't about Black women.

If you want to say these tired and embarrassing women acted like teenage boys in heat?  Well I told you they were older women.  Women hit their sexual peak late in life.

Beyonce did not make a feminist album.

B-b-but, Kat, she's got that dopey talk from TED!

Oh, good God, does it get more bourgeoisie than TED Talks?

TED Talks is bulls**t promoted by bulls**t.  It's the 1% feeling full of itself as well as some of the suck ups in the 99% trying to fit in.

And did anyone really listen to Chimamanda Ngozi Adichie's 30 minute speech that Beyonce sampled?

She's entirely male defined and she doesn't even realize it.

As she went on and on about boys, when it came to young girls and how they were harmed, she had no interest in their lives.

She spoke a lot about herself.

I'm glad that the people present -- her family and friends -- found her speech delightful.

But you know what, if she didn't find feminist classics so boring and actually took the time to read them she might understand why real feminists listening to her felt like they were hearing someone who'd just discovered e-mail speak to those of us who've been surfing the net since the 90s.


She was attempting to reinvent the wheel because she was so ignorant of what had come before.

This was a glorify man speech with a few Feminist 101 flash cards tossed in.

But most importantly, this bad speech?  Why do you think Beyonce used it?

Could it be because she's cheap and she's most likely using it under the Creative Commons license?

Regardless, Beyonce using the bad speech on the album doesn't make her any more of a feminist than her using a sample of NASA's Challenger crash makes her an astronaut.


This really captures 2013 in music.  Crap was treated as art because a few middle aged women who wanted to screw Beyonce were loud and threatening.

But the album that actually expressed feminism?

Ms. never noted it, not once the entire year.

In 2013, music was all about fakery and pretense.  Or, as Joni Mitchell once put it, "artifice and innocence" ("The Three Great Stimulants").

No, Beyonce and her stupid would be lovers, pretending her heavily made up face is natural is about the beauty myth, not about feminism.

This got attention.  This lousy product passed off as art got praise from Ms. and others.

Yet let a real feminist grapple with something beyond worship-me-I'm-flawless and it gets ignored.

Maybe we get the music we truly deserve?

That would explain why most people in the US never heard  Ebony Bones's Behold, A Pale Horse.

It's surprising, it's shocking, it's music, it's art.  But my other choice for the best album of the year will leave many saying, "Huh?"

Here she is performing "While The People S.L.E.E.P." on WNYC.


Stream that and realize all you realy missed out on in 2013.

Ebony Bones is an artist.  When musical history is written, Ebony's art will be remembered.

She's just the latest in a long line of Barry Manilow pablum that sells really good but has no lasting value or meaning.

You'll quickly grasp that you have to go back to the mid-seventies and Patti Smith to find a woman who emerged with so much skill, confidence, talent and charisma.

Do you know how many times Ms. noted Ebony Bones?

Silly Ebony.  If only she'd promoted violence against women, she could have been on the cover of Ms. magazine just like Beyonce.

"Mystery Babylon Balloon" has to be the finest track of 2013 and yet most people never heard it.

They heard a ton of crap they could have lived without.

A ton of crap that rotted their brain.

With two albums tying for number one, that still left eight more spots to fill.

Hanni El Khatib's Head in the Dirt would be the third finest album of 2013.  It had humor, it was sexy and it sweated straight through your speakers. After that,  Shannon and the Clams served up the delicious Dreams in the Rat House, but sadly the three person band lost one just as the album came out.  That's not good.  It tends to suggest that, even though you have a brand new album, you're already the deep past.

Natalie Maines's Mother is an album that did okay in terms of sells but one that I think was misunderstood by a number of critics.  Whine: 'I miss the backing vocals of the Dixie Chicks.'  Whine: "I need something louder and with more instruments.'  Mother is a personal statement, it's a soft statement, in fact.  That's the whole point of the larger project.  It's a stripped down Natalie re-emerging as an artist.  If you couldn't get into it, I don't know why that was but it probably didn't have a thing to do with Natalie or the album she made.


Next up would be Jack Johnson's From Here Now To You.

For those keep tracking, this is the sixth album on the list.

A Bigger Bang by the Rolling Stones?

I loved it in real time.time.

But it's lasted much longer than many of the other albums on the list.  I still play repeatedly, I still find new things to marvel over.  I think it may easily be one of the band's greatest albums -- certainly the best thing they've had since 1981's Tattoo You.

So keep that in my mind when you look at the list.

2013 sucked.  There were six excellent albums and I've noted them above.  If I were including Christmas music -- I never have before so I won't now -- I'd have Mary J. Blige on the list because she did the rare thing, turned a Christmas album into actual art.  In a good decade, there will be one new Christmas album that qualifies as art.  In most decades there are none.  This Christmas is art.  Maybe when Christmas 2014 rolls around, I'll do a piece on Christmas music just so I can rank the albums but I think we'll know who'll come in first on the list.

Kat, there are four slots left!

And if I'm okay with calling good or mediocre albums the year's best then I would be filling out my list with those albums.

As I noted earlier, I didn't get just how great A Bigger Bang was in its first year of release.

It also happens that I'm frequently on the money.


As true then as it is today.

Bruno Mars has to put out a new album.  He's loaded with talent and he can sing, he can write a melody and, with him closing in on thirty, he's got to release a mature album and not another round of bubble gum pop, right?