Kat:  Back in April, Linda Ronstadt's Duets came out and I wasn't even aware of it until August when I was in Barnes & Noble and saw it on a stand with other CDs as I waited in line. 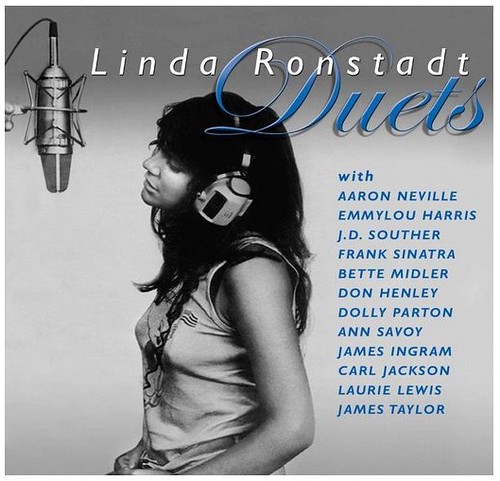 It was several months out and it was a collection of previously recorded tunes so I felt the boat had passed on me having any reason to weigh in.

'New' material that was dead on arrival.

If you ever loved "The Way We Were," were you really dying to hear her do it as a duet with Lionel Richie?

Few others singing on the album can make that claim.


Elvis Presley does have the excuse that he is deceased.  (He also sounds more alive in his archival vocals than Babyface or Michael Buble.)

No one sounds more dead on arrival than Barbra herself.

Despite the fact that the bulk of her top ten pop hits are duets, Barbra's really not all that interesting when dueting.


She turned a duet with Donna Summer into a duel -- "Enough Is Enough (No More Tears)."  That drama and battle provided her with a number one hit.

But the combative nature of her duets usually fizzles.

What works with Barbra and Neil as former lovers countering one another's charges of who is to blame for the break up ("You Don't Bring Me Flowers") or Kim Carnes and Barbra duking it out ("Make No Mistake, He's Mine"), doesn't really work in the tender range of "I Finally Found Someone" (with Bryan Adams) or in whatever the Celine Dion duet "Tell Him" was supposed to have been (by the final chorus, it sounds like female impersonators sending up Barbra and Celine).

On Partners, Barbra offers twelve tracks where she more or less walks over every duet partner -- be they Stevie Wonder or Billy Joel.

Not once does she appear to connect or have an honest emotion.


(There are some who argue that the last honest recorded emotion Barbra registered was in the film Prince of Tides when Nick Notle threw a football at her and she screamed, "My nails!")


She tries to out sing every partner on every tired song on the album, to the point that you start to wonder why she didn't include "Anything You Can Do" on her song list and just endlessly insist "Yes, I can!" over and over, infinity.


In the end, every track ends up sounding tired, dated and like the negative stereotype of Streisand's music that took hold in the early eighties and more or less ended her shot at radio airplay.  It was around the time that she began sounding more unyielding than even Ethel Merman (and less like an identifiable human being)  that radio programmers began passing on her new offerings.

There's a track, "Pretty Bird," with  Laurie Lewis that was previously unreleased.

"I Think It's Going To Work Out Fine" is probably representative of Linda's talents as a duet partner.  She's singing with an off key James Taylor whose typical enunciation problems are far greater than usual (whenever singing a song first done by an African-American man, James especially tends to slur his words as if that passes for 'soulful').  Linda rushes to blend with Taylor on the chorus while packing a wallop when she's soloing on a verse.

On duet after duet, Barbra meets no one while Linda bends to blend with everyone.


The most successful attempts there are probably "Moonlight In Vermont" with Frank Sinatra and "I Never Will Marry" with Dolly Parton as well as her hit duets with Aaron Neville ("Don't Know Much" and "All My Life") and  Ann Savoy ("Walk Away Renee" and "I Can't Get Over You").

But whether it's Don Henley or Emmylou Harris, Linda creates a moment, a connection.

Though nothing on the album was recently recorded (Linda announced her retirement from recording in 2011), not a track on it sounds canned or phoned in.


When music is reduced to nothing more than simple mechanics, you end up with Partners.

In other words, a career revolving around not just great talent but also a real love for music left Linda with 10 competitive Grammy Awards to Barbra's six.  The 2014 releases by each woman makes clear why those numbers are what they are.