John McCain is in Iraq, the Post is on vacation (apparently) and the US government insists no plane was downed

Alsumaria reports a Muqdadiyah mortar attack left 1 police member dead and one civilian critically injured, another Muqdadiyah mortart attack (on a market) left three people injured, and 2 corpses -- a man and a woman -- were found dumped on the streets of Kirkuk Province.

Meanwhile, Senator John McCain, who was visiting US troops in Afghanistan yesterday, is in Iraq today.  The US media hasn't yet noted that fact.  Alsumaria reports he's to meet with various officials including Speaker of Parliament Salim al-Jubouri.

From McCain's Twitter feed, we'll note this photo of him with US troops in Afghanistan yesterday.

John McCain @SenJohnMcCain  ·  20h 20 hours ago
Honored to preside at troop promotion ceremony at TAAC-E #Afghanistan - congrats and thank you for your service! 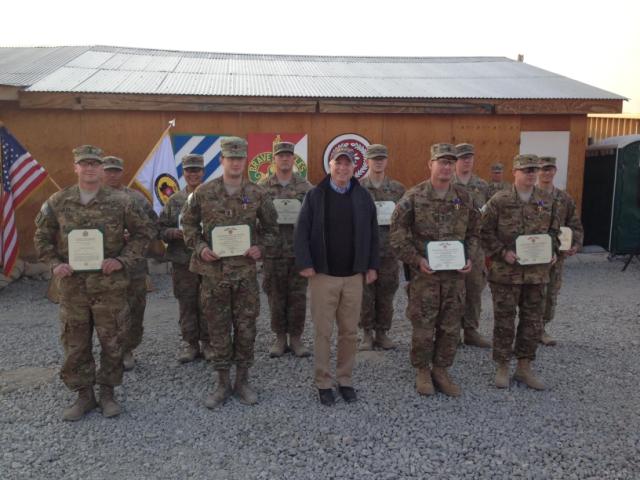 
RT:It is not yet clear whether the jet was gunned down or had a malfunction. Does Islamic State have the weapons to down a sophisticated military jet?

Firat Demir: I’m afraid, yes, they may have the capability. Remember that they have looted large supplies of ammunition and weapons systems from the Iraqi army when they overran Mosul. Most of it was left from the US to the Iraqi government. And then they took over Mosul and all around the country in Syria as well as in Iraq, and they have captured those military bases. They have gained the ability and the capability to shoot down planes, which is the reason probably that most of the airline companies have changed their routes, they are not flying over the ISIS zone anymore.


But they miss the point.

The US government has fought back against assertions that the plane was shot down.

The why is also your story.

This goes beyond one incident this week.

Barack is sending thousands of US troops into Iraq and has US troops flying over Iraq.

If the Islamic State has the ability to shoot down planes, suddenly an American public already having the attitude of "enough" on the never-ending Iraq War gets a lot angrier, a lot more worried and a lot more vocal.

That's why the United States government has wasted so much time in the last 48 hours insisting that the plane was not shot down.

Support for the Iraq war is almost as low as approval of Congress. Interventionist sentiment ticked up in the summer of 2014 as Americans saw ISIS beheading journalists and aid workers on video. But even then most voters wanted air strikes, not more troops. Here’s a prediction: 13 months from now, when the voters of Iowa and New Hampshire begin voting for presidential candidates, Americans will be even more weary of nearly 15 years of war, and U.S. intervention will be even less popular than it is now.


We'll note this Tweet by the Washington Post's Liz Sly:

And we'll wonder why the Post doesn't have an article on the topic?  Are they on Christmas vacation?