Hillary Clinton is running for president for the year book photo.

Possessing only a blood lust for war, she has no plans to help people.

She also has no real record of success.

She can be elected to office, for example, but she accomplishes nothing of value once in office.

Her last non-campaign 'win' was probably, as Wally and Cedric pointed out, when she bested Barbara Bush in the cookie bake off.


So when it's time to spin success for Hillary, what do you do?

Go to America's biggest liar of all, the woman who lied on not one, not two, not three but four public affairs programs all on the same Sunday.


MARK HALPERIN: What would you say are the three biggest accomplishments of Secretary Hillary Clinton when she was at State?

SUSAN RICE: Well, first of all, I think you would have to put them in context of the administration's accomplishments.

HALPERIN: Anything that she participated in a meaningful way.

RICE: She participated in everything that we did in the first term in a meaningful way.

First of all, in the first term, we were able to bring to conclusion two long and costly wars in Iraq and Afghanistan. And she was very much involved in supporting those transitions. In the presidents first term also we initiated and now have sustained what we call, the re-balance to Asia, the Asia-Pacific.


There were at least 35 violent deaths in Iraq yesterday, according to Margaret Griffis (Antiwar.com).

And Lie Face Susan Rice gives a televised interview where she claims as an accomplishment the Iraq War ended.

Only supreme liar Susan Rice could deliver that one with a straight face.

Who forgot to tell Iraq?

The US government involvement in the Iraq War ended?

Tell it to the State Dept, the Defense Dept, the White House, the US Embassy in Baghdad . . .

Susan Rice, she may go down as the biggest liar in the 21st century.


First up, there's the influx of refugees from Syria (both Syrians and returning Iraqis who earlier sought asylum in Iraq).


Near the end of last year, Refugees International noted:


As Syria’s civil war has dragged on, the direction of forced migration for many Iraqi refugees has reversed. Tens of thousands of Iraqis who sought refuge in Syria between 2003 and 2011 have returned home, joining about a million Iraqis who were already internally displaced. This year, the advance of the Islamic State group in central Iraq forced more than three-quarters of a million people from their homes, bringing the total number of Iraqi IDPs to roughly two million.

And at the end of last month, the United Nations Refugee Agency Tweeted: 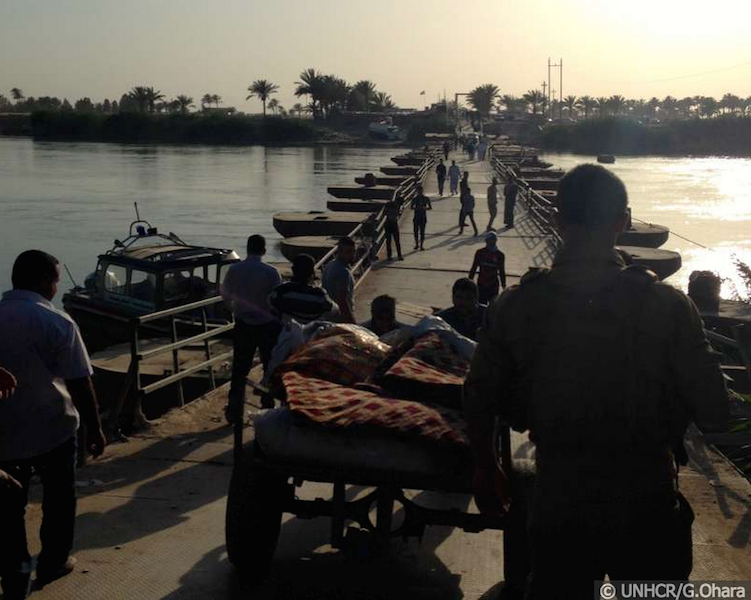 Alsumaria reports that Angelina Jolie, actress and UN Goodwill Ambassador, is in Turkey visiting Iraqi and Syrian refugees in a camp in Mardin.

While in Turkey, Jolie and Antonio Guterres (UN High Commissioner for Refugees) met with Recep Tayyip Erdogan, President of Turkey (pictured above).

The United Nations High Commissioner for Refugees issued the following:

The Hollywood actress and her daughter Shiloh Jolie-Pitt traveled to Turkey Saturday afternoon in honor of World Refugee Day.
After visiting a Syrian and Iraqi refugee camp, Mrs. Brad Pitt couldn't help but voice her appeal for world leaders to get involved with what could be the "worst refugee crisis ever recorded."

"There is an explosion of human suffering and displacement on a level that has never been seen before," Jolie said, warning that Syrians and Iraqis were running out of safe havens as neighbouring states reached the limit of their capacity.
"It is hard to point to a single instance where, as an international community, we are decisively addressing the root causes of refugee flows," she said.

But none of that exists in the world that Susan Rice lives.

In that world of lies, the Iraq War ended.

And it was an accomplishment, no less, according to Susan Rice.


The refugees haven't seen any accomplishment.

Reuters notes that "US and caolition forces targeted the Islamic State on Friday with 16 air strikes in Iraq."

Yet Susan Rice claims that the Iraq War is over and that this is an accomplishment that Barack and Hillary can share.

Lastly, David Bacon's latest book is The Right to Stay Home: How US Policy Drives Mexican Migration.  This is from "PICKING PEAS SHOULD BRING A BETTER LIFE," Rosalia Martinez, as told to David Bacon:


I'm Triqui, from Rio Venado in Oaxaca.  I've been here 7 years, working in the fields all the time.  Right now I'm picking peas.  Other times in the year I work in the broccoli.

The worst part about working in the peas is that you have to work on your knees. After a day on your knees they hurt a lot, and when you stop it's hard to extend your leg.  It hurts, even when they give you a break for 15 minutes every two hours.  I don't take pills for the pain, but I know many people who do.

Sometimes your knees break down.  That's happened to a lot of people.  Their knees go out permanently and they can't work anymore.

Another problem is the dust, which has chemicals in it.  Until two years ago they didn't give you glasses to keep the dust out.  Now they do, but by now most people who work in the peas have problems with their eyes.