Kat: Kicking things off with an instrumental that sounds like a fuzz pedal, whack theme to the latest James Bond thriller, Wilco returns. 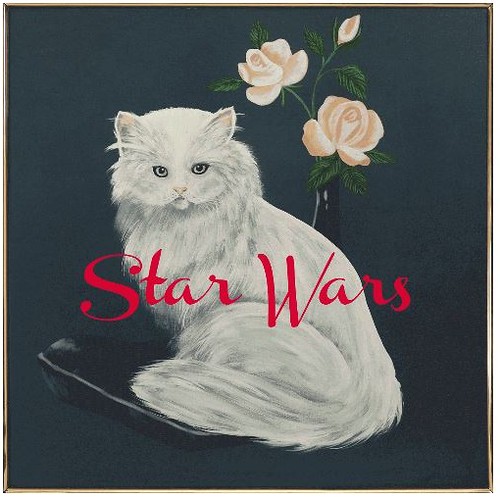 The track is "EKG," the album is Star Wars and it's the best thing they've done since 2004's A Ghost Is Born.


They've got enough energy and drive to turn "Pickled Ginger" into a sequel to T-Rex's "20th Century Boy."

Which is not to suggest that Wilco is the nostalgia group many have dismissed them as over the years.


That's "Cold Slope" and the lyrics may or may not interest you but it's how they marry them to the music that really attests to Wilco's real power.


They're into so much more riff built over a basic rock chord progression.

This isn't a revival of the Dead or the jam band style of Dave Matthews.

This is something closer to jazz, some intense form of prosody -- a devotion to prosody, in fact.

Each note of the music is telling a story.

The easiest way to explain it to non-Wilco fans might be to offer, if the previous output made for albums to smoke doobies with, this is the drop-acid album.

With the possible exception of Tori Amos and Animal Collective, I can't think of anyone who's gone so deep  in the last decades and use musical notation as the ultimate language of communication.

Jeff Tweedy's vocals, don't get me wrong, are still strong and on the money.

It's just that they've become just another line of shading for the larger sound the band is now going for.

Maggie and I were listening to the album and she said, "I can't understand why it's getting such bad reviews."

I didn't want my experience spoiled by anyone who couldn't get the joy Star Wars is providing.

Which is not to say it's a happy album.

There are dark moments, there are brooding moments, but this a journey album in a manner similar to Pink Floyd's Dark Side of the Moon.

And some people don't want a journey.

They want to sit in their easy chair and hear the same song they've been singing along to for the last twenty or more years.

That's fine, if that's what you want.

And if that's what you want, you probably won't want Star Wars.

But if you've really been wishing music would shred things up, create a sonic landscape that was terrain you hadn't already trod over several times, then Wilco's Star Wars is the album for you.


Right now, you can download it (for free, right now) at the band's site where they note:


It’s available to you now as a free download (for a limited time) on Wilcoworld, iTunes, Amazon and Google Play and streaming on Spotify, Apple Music and Rdio. Digital downloads remain free until August 13.


Prefer vinyl or CD? No problem. Pre-order now in the Wilco store. CD release date is August 21. Vinyl a little later, on November 27. Weekly pre-order contest drawings begin July 30 and include handwritten lyrics to Star Wars by Jeff Tweedy, tickets to any 2015 headlining show, an undeveloped disposable camera from Wilco and a signed test pressing of Star Wars.