Kat: One album made her, one album nearly destroyed her.

Tracy Chapman never really had it easy, though.

Her acclaimed self-titled debut was a huge hit and so was "Fast Car."  In fact, the single was a juke box hit in the summer of 1988 long before it went top ten.

Maggie was working at a glorified pizzaria out in Oakland.  Sumner and I would usually go there on Friday and wait for it to close and the night to kick off.

Gina was this sub-human in four inch heels which made her almost five-four.  She was dating Robbie who was a cook but she insisted on calling him a chef.  They were usually doing it in the men's room when it was her turn to clean it.  She insisted she was too good to work there -- while implying that the other workers were perfect for the dive.  And mainly she pretended that she was really something when, underneath the painted on cheekbones, she didn't even qualify as pretty.

That summer, she was infamous for two things.  First, stealing the other servers' tips.  Second, for her music 'knowledge' and/or 'taste.'

She would throw a s**t fit when a customer played "Fast Car" on the juke box.

She found the song depressing, "celebrating poor people" and nothing like her favorite jukebox track "Kiss Me Deadly" by Lita Ford.

The Ginas of this country were never going to embrace Tracy Chapman so a backlash of some sorts was always a given.

1988's self-titled debut was followed by 1989's CROSSROADS and the disappointment set in quickly.

Gone was the stark simplicity as Tracy pursued a more band-like sound and gone was the first person songs people could relate to.

Yes, CROSSROADS was political but so was her debut.

What was missing was the identifiable personal element.

"For My Lover," for example, had addressed incarceration but in a manner listeners could relate to.  "Subcity," one of the better tracks on CROSSROADS, settles for sweeping statements with little of the insight her first batch of recorded songs offered.

CROSSROADS went platinum mainly because people loved her self-titled debut.  And -- pay attention, Adele -- it killed the enthusiasm for Tracy resulting in the flat out rejection of MATTERS OF THE HEART.

Which was really too bad because Tracy's songwriting was returning to fertile ground on the third album.  A one-hit wonder status was eluded thanks to 1995's NEW BEGINNING and the hit "Give Me One Reason."

What's followed has been strong and 2008's OUR BRIGHT FUTURE even demonstrated that Tracy could artistically surpass her self-titled debut. 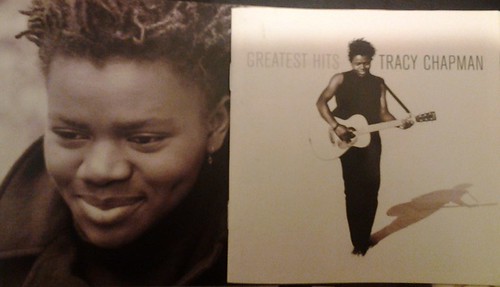 And now comes GREATEST HITS -- an 18-track retrospective covering all of her albums and her performance of "Stand By Me" on the THE LATE SHOW WITH DAVID LETTERMAN -- at nearly 700,000 views on her YouTube account and at over 400,000 on another YouTube posting.  The Elektra and Rhino release comes with a 20-page booklet which features the lyrics to 17 of the songs (the lyrics to "Stand By Me" are not reprinted) and session credits.

The cover of the album is a Herb Ritts photo from the shoot for CROSSROADS and it's a much better cover choice than the one selected for CROSSROADS.

That album has three cuts on the collection: "Subcity," "All That You Have Is Your Soul" and the title track.  Of the three, the strongest remains the title track.  And a good argument could be made that "All That You Have Is Your Soul" could have easily been left off (Chapman picked the tracks) because it merely restates the price-of-fame theme covered better in "Crossroads."

If it had been left off, "Our Bright Future" could have been included.  It's needed.

It's needed because a retrospective like this can lead to listeners seeking out the earlier albums and, again, OUR BRIGHT FUTURE is a masterpiece.

It's also needed because of the backlash Tracy was always going to face, the one that Gina's attitudes touched on.

Tracy's wrongly seen as dour by some and "Our Bright Future" is the musical rebuttal to that.


What will listeners get from this collection?

That after her sophomore navel gazing songs about the price-of-fame, Tracy returned to strong writing, to, yes, "Telling Stories."

That's the strong opener to the collection.  Surprisingly, only three tracks are from her debut: "Fast Car," "Talking 'Bout A Revolution" and "Baby Can I Hold You."  I would've liked "For My Lover" as well but I applaud Tracy for going the non-Carole King route (meaning I'm pretty damn sick of every Carole collection -- live or studio -- leaning so heavily on TAPESTRY -- nine of 1994's IN CONCERT tracks were live versions of TAPESTRY songs -- and IN CONCERT only had 15 tracks).


By going deeper than any Carole collection ever has, Tracy shines a spotlight on some gems you may have missed but also provides a good artistic overview of why her art matters and how it has actual meaning.  In "Kiss Me Deadly," Lita Ford sang the thoughts of some man (songwriter Mick Smiley) which concluded that life "ain't no big thing."  Tracy finds joy in the same small moments, Smiley dismisses and she also spotlights patterns that work to repress and suppress.