The waning of Moqtada?


Haidar Sumeri ‏@IraqiSecurity 49m49 minutes ago
#Iraq is by far the most democratic Arab nation.. Where else in the Arab world would such huge protests be allowed? pic.twitter.com/lGlfPdvfjL
View photo
12 retweets 14 likes

And his stupidity is yet again showing if he thinks the above is 'democracy.

These are not real protests.

They did not originate with the people.

Moqtada al-Sadr used whatever's left of his influence (it's waning -- as the US State Dept is aware) to get his followers out in the street.

To object to government policies?

To demand the government be supported.

These are not protests.

And when Iraqis take part in real protests, as the Twitter idiot/liar damn well knows, the Iraqi forces attack the people protesting.

And often they will also attack journalists attempting to cover the protests. 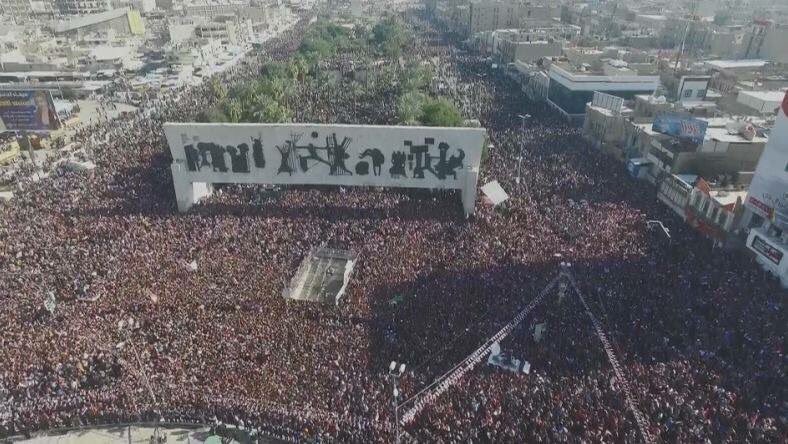 That's the better term for it.

It's like that ridiculous non-action Jon Stewart staged in DC.


It's not a protest.

And Moqtada weakens himself with this nonsense.

As a general rule, Moqtada cannot deliver to his followers anything.

That's been the reality throughout the Iraq War.

He was almost toppled and forgotten at one point but Condi Rice and others re-inflated him when they thought they were taking him down.

When he speaks to that anger and mistrust, they rally around him.

That's why those who leave him go to even more radical Shi'ite groups.

What can the US do right now?

I have no interest in sidelining or 'defeating' Moqtada.

But I was on the phone with two State Dept friends discussing this topic because they wanted input.

The worst thing the US government could do -- if they want to sideline Moqtada -- is go after him.

Condi did that, with statements, when he was weakened and it only drove support for him.

Just ignore him and pray he continues to (mis)use his support to stand by a corrupt government.

He's stopped making calls for change in this government because it's just not happening.

And he actually made real demands -- as opposed to being a cheerleader for Haider, the way Moqtada is.


al-Sistani walked away from it because (a) he knows it's not happening and (b) he knows he's going to lose followers over it because he'll look like a tool of an abusive government.


It's a decision Moqtada should have made.

The two were never close.

Nouri wants back in.

And may get back in.

Because Haider's doing such a lousy job.

Many Shi'ite politicians who did not care for Nouri are beginning to say Nouri's needed.

(Nouri is a thug who took the country to the brink.  I am not saying he needs to return.  I'm talking about what the perceptions are in Iraq.)

Moqtada knows he and Nouri have crossed a line and that if, Nouri returned to power right now, eliminating Moqtada would be one of Nouri's strongest goals.

Or Moqtada thinks that.

So to protect himself, he's making desperate measures to prop up Haider.


Haider's fate is now entwined with his own.

There's nothing the State Dept can do to bring down Moqtada (and, yes, that is a goal of the administration).

Even mockery of Moqtada would drive support to him.

They need to just step back and let this play out however it's going to play out.

As for the rally.

In that who knew he could turn out that number.

But that's nothing like the rally he pulled in when he finally returned to Iraq from Iran.

Again, his support is waning.

His efforts to prop up a corrupt and ineffective government will only breed more disillusion in those who are still following him.

By the way, the State Dept has issued a statement on the mosque bombing from yesterday.

We won't be noting it.  I was asked to this morning.

If you read it, you'll see why.

We will be noting the bombing whenever I'm able to do another snapshot -- maybe tonight.  If not, it'll be Saturday.


FYI,  a friend went to the doctor yesterday thinking she was going to get something to take for what she assumed was a very nasty cold. Instead, she learned she had Stage II kidney failure.  I had planned to do a snapshot yesterday but that was before that.  Instead, I flew out to her and tried to be a good friend.  My apologies for no content last night.  That's also why I didn't take part in the gina & krista round-robin roundtable or have any content for this weeks edition.  Again, my apologies.  (And sorry for everyone who picked up the slack on the round-robin, I've heard that was a near all night thing.)