Kat's Korner: Encore or just hurry her off stage already?

Kat: Barbra Streisand's been nominated twice for a Tony and twice for an Academy Award -- and she actually won an Academy Award (the Tony she was eventually given wasn't a competition award, it was 'star' of the decade in 1970 -- five years after she stopped performing on Broadway).  So with those accolades and the seven Grammys she's won for singing, she should be able to pull off her latest album ENCORE: MOVIE PARTNERS SING BROADWAY. 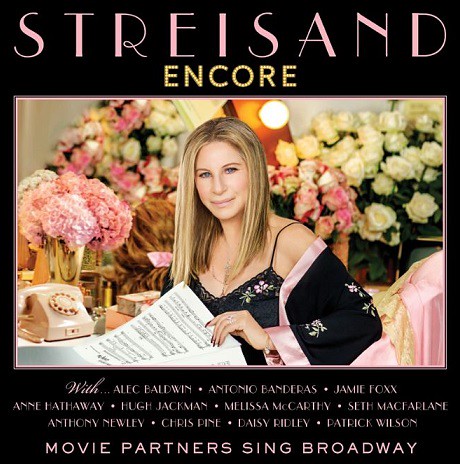 The first thing you notice is the cover.

An album of duets featuring a photo of . . . just Barbra.

And it's a bad 'photo' (is it supposed to be 3-D or just frightening).

Yeah, like that brief time in the 80s, Babs is back to looking surprisingly fierce like Ron Perlman when he was dressed up as Vincent for BEAUTY AND THE BEAST.

It's the eye brows and the shapeless curtain of hair but, most of all, it's the dead eyes.

When she gets like this she tends to record duets -- "Till I Loved You" anybody?


But at least previously, she had a concept album to serve up -- the cycle of a love affair.


What is the point of this new album?

Are we supposed to gush, "It's Anne Hathaway on a trio!!!" (with Babs and Daisy Ridley)?

I like Anne but "At the Ballet"  serves no purpose on this album.

The same with the done-so-often-it's-trite "Anything You Can Do" which is not just dull and bad, it's laughable.

Not because Melissa McCarthy can't carry a tune -- she's in fine voice.

Some of the partners are also in fine voice.

A few are better than that.

Jamie Foxx, for example turns in a real duet performance.

But he does so in "Climb Ev'ry Mountain" and the way this SOUND OF MUSIC song is arranged make it sound as less like musical theatre and more like a cabaret tune Albert's Starina is performing at The Birdcage.

In fairness, none of the songs really sound like Broadway.

The only one with any real meaning, the only one that conveys a damn thing that's recognizable as life is "Any Moment Now" and then the bridge kicks in sounding something like a NASA lift off.

It destroys everything Hugh Jackman has built up in the song as the 'music' suddenly tries to compete with his vocal.

I don't think it's news that either Hugh or Jamie can sing -- they've both demonstrated that long before this project -- there is news in some of the other peformances.

Alec Baldwin's duet with Barbra on "The Best Thing That Ever Happened," for example, explains his leading man career -- or lack of one.

For about the first five seconds of singing, he holds your interest and then, like with THE MARRYING MAN, THE GETAWAY, THE SHADOW, etc, you grasp that he has nothing to offer other than the initial impression.

He's a false front, a cardboard cut out.

Which brings us to Seth MacFarlane.

She can do a pretty good imitation of Barbra's singing.

Like Seth can do a pretty good imitation of singing.

She's a good mimic, she just can't invest a song with personality and meaning the way her half-sister can.

And that explains Seth MacFarlane who hits notes but never sells a song -- not on FAMILY GUY, not here with "Pure Imagination."

That song, by the way, is from CHARLIE AND THE CHOCOLATE FACTORY.

Three things on that.


1963's THE BARBRA STREISAND ALBUM contained "Much More."  I happen to like the performance but, along with "A Taste of Honey," this song has long been criticized as beneath Barbra.  (I'd agree on "A Taste of Honey.")

The duo responsible for some of the worst, most tuneless songs in film and on stage?

Newley, by the way, shows up for some reason as a duet partner when Babas covers "Who Can I Turn To" (from Bricusse and Newley's musical THE ROAR OF THE GREASEPAINT - THE SMELL OF THE CROWD).

Shows up for some reason?

Does this mean that when Babs dies, she's okay with others using her recordings as they see fit?

Can you picture control freak Streisand screaming from the grave as Miley Cyrus duets with her on "Make No Mistake, He's Mine"?

There's no reason for it.

There's no bond between Barbra and Newely.


It's just a cheap gimmick.

If you listen closely, Newley's vocal even sounds like analog and not digital.

Now for point three -- this is a Broadway album.


"Pure Imagination" has not been performed on Broadway.

When CHARLIE AND THE CHOCOLATE FACTORY opens, it's expected to open in 2017, it may be heard on Broadway.

But it's a song from the 1971 movie WILLY WONKA AND THE CHOCOLATE FACTORY.

Never performed on Broadway and from a 1971 film, the song really doesn't belong on the album.

But do any of them?

With Hugh Jackman, Barbra constructs something that could have fueled an album: an exploration of love and the way we take one another for granted.

"Any Moment Now" could have been the centerpiece of album about a relationship.

Or she could have just decided to record the score of a Broadway show with these performers.

Instead, she's picked up songs that often aren't that great and that don't mesh together to tell a story.  For the woman whose first album won Album of the Year at the Grammys, for the woman who's inability to get hit singles was always justified with the claim that she was an "album artist," that's pretty sad -- maybe even sadder than her most recent concerts.


She's the one who bears the responsibility.

She's not just co-producer and co-arranger, she also insists on a "conceived and directed by Barbra Streisand" credit.

As a fan of THE PRINCE OF TIDES and someone who considers both YENTL and THE MIRROR HAS TWO FACES to be classics, I'm usually a fan of her directing but with ENCORE I just want to throw my popcorn at her.