We're going to have to deal nonsense right off the bat. 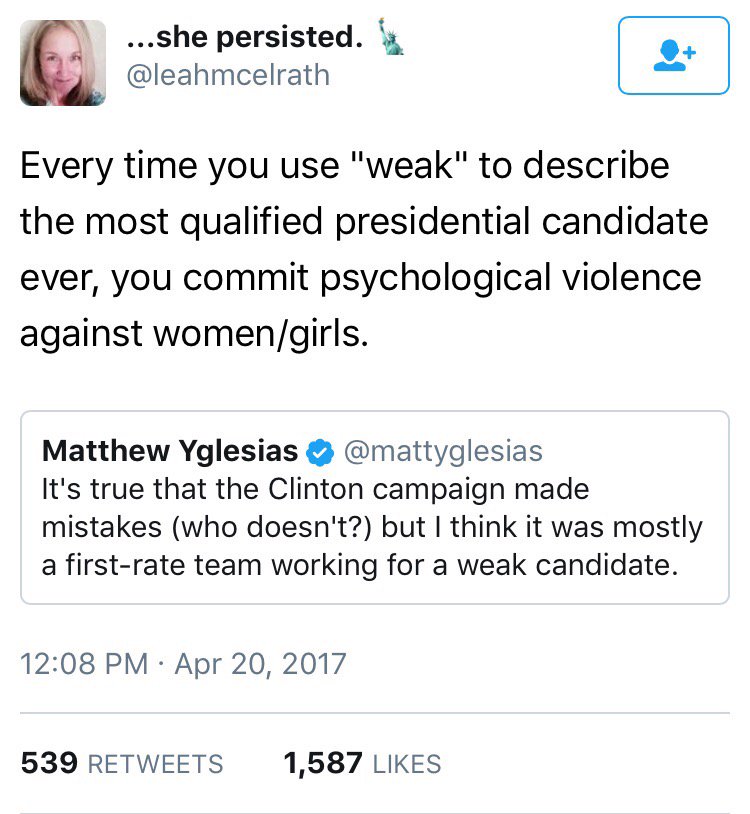 Feminism is a movement.

Feminism is about equality.

It's not about specialism.

I'm sick to f**k of trash like that bald idiot insisting Hillary was the most qualified candidate for president ever.

In 2007 and 2008 (long before I supported her), I would hear people scoff at the idea that she even had qualifications.

I would defend her.

And you can say she was qualified.

But you can't lie that she was the most qualified.

And I'm sorry Baldy McElrath if that bit of truth ripped off a butterfly's wing in some alternate universe.  (Where your oversized forehead is, no doubt, worshiped).

Maybe were she running for talk show host, she'd be the most qualified?

But for President of the United States?

I struggled to list meaningful credits she possessed in 2008 in exchanges with cab drivers.

Because she really doesn't have any.


She had one complete term as a senator and two years of a second one when she became Secretary of State.  Without even evaluating those two positions in terms of any accomplishments, that's really not that impressive.

But I go by how people treat things.

Hillary doesn't think First Lady matters as evidenced by her sexist announcement that, were she elected, Bill would be over the economy.

He wouldn't, she assured us in this last run, be planning state dinners or picking out china.

Because it's too much to expect a male spouse of a president to do what we'd expect a woman to do?

Hillary's always been a troubling sort of feminist.

No, 2016 Hillary insisted, she, as president, would do that herself.


Nor is it practical.

Hillary was not the most qualified.


She was probably somewhere in the middle.

But that may be generous.

It's interesting that no one can criticize Hillary according to the balding "human rights activist" (means she supports LGBT rights, she doesn't speak out in favor of those destroyed by US wars), but she can -- and has -- slammed Jill Stein.

That's a funny sort of feminism.

Again, as with Hillary, I judge people by the standards they apply to others.


Hillary Clinton was a lousy candidate.


Matthew Yglesias -- who I have no reason to defend now or ever -- calling Hillary "a weak candidate"  does not, as Balding Leah McElrath insists, "commit psychological violence against women/girls."

To allow this bitch to get away with this is to destroy free speech.

Hillary was an awful candidate, not weak, awful.

And feminism is about telling the truth.

Telling the truth about men, about women, about the whole system.

If Hillary's a lousy candidate -- and she was -- then you say so.

And it's not violence against anyone.

But a hagged old balding bitch wants to tell us that we can't speak freely and wants to presume that women and girls can't handle truth?

That we're too delicate for public discourse?

A presidential election is not a cover of 16 MAGAZINE.

But if she did, people could speak honestly and that's what Leah really fears.

Hillary was a lousy candidate.

And she was not the most qualified ever.

She wasn't even the most qualified in the Democratic primary.

"She persisted" is what Leah calls her Twitter feed.

Having read it, I think Leah should retitle it "She farted."

Or, possibly, she'd prefer "She quifed."

She's trying to blackmail people into silence.  That's not feminism.

It's a reality that 'human rights activists' (especially those who are Temple Love Slaves for War Hawk Hillary) will never face.

When does it end?


It also appears that the number of civilian casualties has risen in recent months as combat has shifted to densely populated west Mosul and the coalition has undertaken the heaviest bombing since the war began almost three years ago.
[. . .]
Raed Mohammed Hasan, 30, said he lost neighbors and relatives, including his 11-month-old daughter, Rania, in an airstrike in east Mosul on Jan. 21. He and other residents say 11 civilians died in that strike, which occurred during the months-long battle to oust Islamic State from Iraq’s second-largest city. Coalition records show a strike was carried out in Mosul that day, but officials say it is not being investigated for civilian deaths.

And it never ends because solutions are not sought.

Nouri al-Maliki was the mid-wife to the Islamic State.

His actions allowed them to rise.

That's on Bully Boy Bush and the Congress of the United States who all agreed to benchmarks for Iraq, remember that?

Congress was going to cut off support if Iraq did not show progress.

Congress was as full of it as was Bully Boy Bush (Democrats controlled both houses them).

But so was Nouri.  He agreed to those 2007 benchmarks.

One of which was political reconciliation.

But he never pursued it, he never enacted it.

And then Barack comes along.

He doesn't demand that Nouri keep the reconciliation promise.

In fact, when Nouri loses the 2010 election (to Ayad Allawi), Barack goes out of his way to overturn the elections results (via the US-brokered Erbil Agreement) and give Nouri a second term that the Iraqi voters did not want.

And Nouri only got worse.

There is still no political reconciliation in Iraq.

And stop pretending that the US government has no power.

And that has nothing to do with troops or war.

It has to do with Iraq's needs.

And the US government's response:  To whip it out on request, no conditions.

IANS reports, "The US State Department has approved arms sales worth $295 million to Iraq, the Pentagon confirmed."


John Kerry couldn't find it because he was too busy, as Secretary of State, playing toy solider.

But now Donald Trump is in the White House and yet another administration will fork over everything to the Iraqi government (that the US installed and keeps in power) without any conditions.

Let's stop pretending that the never-ending Iraq War is seen as 'tragic' or even 'problematic' by the US government.

It doesn't want it to end.

If it did, it would follow textbook examples of diplomacy.

Three administration, over 14 years, and the war continues?

That's obviously the intent and the plan.


We're going to have to wrap up.  Sorry so much was spent on an idiot but we cannot allow anyone to dictate what we can and cannot say.