Kat: Listening to Sam Smith groan, moan and sail through the songs on THE THRILL OF IT ALL is to hear a true artist explore. 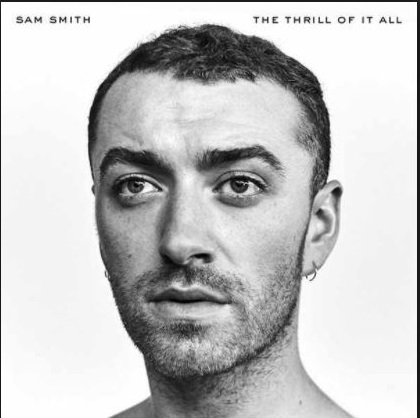 Elaine's already noted how much she loves "Burning."  And she's right, it really is something.

Has any modern male singer conveyed more with a vocal?

Maybe in the fifties when Johnny Mathis and Frank Sinatra charted. (As a nine-year-old, at his first singing lesson, Sam sang Sinatra's "Come Fly With Me.")  It's also true that his talent echoes Sam Cooke and even George Michael in his quieter songs and Diana Ross in her bluesier ones.

But these days, if you want to compare Sam to another singer, the press goes with Adele.

So let's go there.

Adele's follow up to 21 was the hugely disappointing 25 and I noted it was a disappointment in real time.  The e-mails disagreeing with me insisted this would be Adele's best showing on the singles chart despite my noting that she didn't have singles.

What ended up happening?

The lead single had already hit number one before the album came out.

The rest of the tracks?

Only one cracked the top ten.

A huge disappointment for a grossly overpraised album.

There wasn't anything a listener could identify with, not a real song anywhere to be found.

THE THRILL OF IT ALL doesn't have that problem.

Along with the lead single "Too Good At Goodbyes," the album has "Burning" and "Pray" which are stunning.

There's also "Him" which is just amazing.

"Him" is about loving him as well as a plea to HIM -- you know, God.  And it works.  It works as social commentary, it works as a song, it works as a search.  It also works as a sign of what may come next.  By that I mean, it shows the promise that Stevie Wonder demonstrated in the songs on his three seventies albums leading up to 1972's TALKING BOOK.

And like Stevie, Sam's terrain is pretty much love songs -- or love landscapes.

In fact, the more I listen to THE THRILL OF IT ALL, the more I feel Stevie Wonder may be Sam's true antecedent.  His songs grab you and reach you and seem to capture so much of what we are going through.


This is a tight album that really delivers and just gets richer with each listen.  Don't miss it.