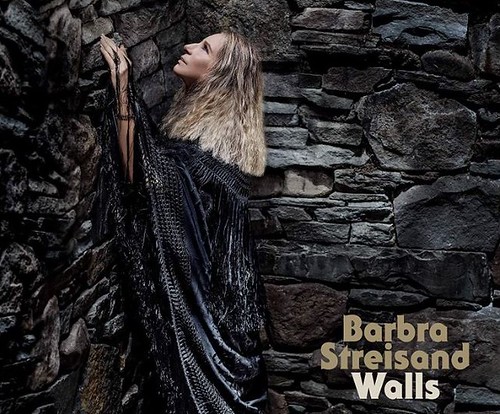 Kat: Barbra's got a new love and his name is Mister Man.  That's what's so obvious at first listen to WALLS.  The second thing that's obvious is how unimportant and uninspired Streisand truly is.  Years ago, Joe Queenan wrote a devastating overview of Streisand -- one she seems determined to sign off on.  "On the great Highway of Life, this is one gal who never wanders too far away from the median strip," for example, could practically be a pull quote to promote this album.

For those who've missed it, Babs is peeved off -- and eating a great deal.  It's all the fault of Donald Trump, she wants you to know.  But her eating bricks of coffee ice cream?  She was doing that back in the sixties, in fact, she had a freezer built into an early bed for just that ice cream.  And her weight?  Again, back in the days of FUNNY GIRL, she was having to repeatedly insist that she was not pregnant due to her weight gain.


So to note that she's yet again full of it is to note the obvious.


Barbra's WALLS is not art or even mildly artistic. It's nothing but a rich woman making MUZAK.  For example, the queen mother Barbra keeps insisting how hard it is for her to sleep these days to interviewers who show up for who-knows-what-reason to speak to one of the laziest minds of our times.

She kicks off the album with a song entitled "What's On My Mind."  It matters little that it's a hodge-podge of bad tune and lyrics.  What matters is that -- in interview after interview -- Babs issues simple platitudes yet, for this bit of pop schlock, she requires three additional writers to flesh out what's on her mind.  For those who feel 'deeply,' you see, you need co-writers.  Or, more to the point, if you can't really feel it, pay someone who can.

Think of this as Babs most extreme version of checkbook recording.

She writes many checks.  Several are written to Jonas Myrin -- her apparent soul twin, responsible for four songs on the album.  And why not?  When an elderly Jewess (76) wants to speak her mind, who better than a 36-year-old, born again Christian, Swedish man to convey her thoughts?

If the songs sound less than heart felt, never forget she was incapable of writing them herself.

It's something -- irony? -- that she's recorded an entire album in response to Donald Trump while she grabs her granny hemlines and runs from set to set to any program tired enough to have her as a guest and decries the media for . . . focusing on Donald Trump.

As bad a collaborator as Jonas Myrin is for our Modern Day Ethel Merman, the 'worst cut' honor goes to the title track written by Babylove and Alan and Marilyn Bergman -- a couple who should be in musical prison to this day for the abomination that was "There's A New Girl In Town" (the theme to the sitcom ALICE).

Walls, here and there, everywhere
In every city, every town
We would have that better day
If all the walls came tumbling down

Facile?  Certainly unreal coming from La Streisand who, of course, remains infamous ("The Streisand Effect") for her hissy fit over aerial photographs that included her properties in Malibu.  If Babs couldn't live behind walls she might have to endure the "freaks" who still follow her (she's never had a nice or kind relationship with her fans).


Years ago, Streisand recorded John Lennon.  "Mother."  His primal scream song.  Her version was so bad that it's still ranked as one of the worst recordings of all time.  And, just to be clear, it wasn't well received when she released it on 1971's STONEY END.  In ROLLING STONE, Stephen Holden observed, "A mechanized shriek that has all the humanity of a police siren, it makes an embarrassing mockery of a great song."

This go round, she tries to make a mockery of Lennon's "Imagine."  But it plays like she's the joke.

Listening to her murder the song with bad phrasing ("And NOOOOOOOOO religion too"), I kept thinking this has to be a joke, right?

As she merges it, at 1:40 in, with "What A Wonderful World," I thought she'd finally done something smart by avoiding what, for her, would be the most laughable part of the song.  But, nope, she may sing about better angels on this album but there were none present to advise her -- which is how she ends up, later in the medley, launching into the verse that Barbra Streisand should never, ever record:

No, Barbra, I wonder if you can.

You, after all, are the personification of greed.  You are the one whose greed drove lp prices up.  And you are the one with your own private mall on your property -- excuse me, on your compound.

Greed, avarice, those are your qualities.

Not so much, Babs, not so much.


It wasn't the Iraq War that upset Babs.  Certainly wasn't the Palestinians -- no, Babs is wedded to the brutal and occupying Israeli government to her dying day -- and judging by what's left of her voice (husky, deep and off-key), that day isn't all that far away.  It wasn't the deporting of immigrants that upset her -- she was silent when Latino groups were dubbing Barack Obama "The Deporter In Chief" and she wasn't losing sleep over it.

Serena Marshall (ABC NEWS, August, 2016): "President Barack Obama has often been referred to by immigration groups as the 'Deporter in Chief.' Between 2009 and 2015 his administration has removed more than 2.5 million people through immigration orders, which doesn’t include the number of people who "self-deported" or were turned away and/or returned to their home country at the border by U.S. Customs and Border Protection (CBP)." Also from the report:

In fact, they have deported more than the sum of all the presidents of the 20th century.


Finally, things have gotten bad enough for the equivalent of a bored, wealthy housewife to notice, and to want to make some money off it, so she records a bad album.

WALLS doesn't just explain that Barbra really has nothing to say, it also makes clear why she's had no real cultural impact.  Diana Ross could, and did, do a haunting version of "Imagine."  Barbra -- in her ridiculous Ethel Merman style -- destroys the melody, the mood and the intent of the song.  So if someone tries to con you by praising this album, do yourself a flavor and slap them across the face.  And if you really want to drive the point home, steal from this album's lead single and hiss "Don't lie to me!" while you slap them.