Tuesday, January 15, 2019.  Events in Iraq make clear that there is no bravery or independence in the western press -- especially not in the US press.


Liars run all over the world and they tend to cover for each other.  Guess that explains Michael Burke (THE HILL) typing up this:

Former Senate Majority Leader Harry Reid (D-Nev.) said in an interview published Monday that his vote in support of the Iraq War "tainted my heart."
Reid told The Nevada Independent that the vote "was a horrible mistake I made."
"It tainted my heart. It was the wrong thing to do. But I was sucked in by General [Colin] Powell and others and I believed them. So I regret that, yes, I do," he said.


Did it taint baby's heart?

Did little Harry not have parents nor parental figures?  Oh, wait.  Little Harry had Inez and Harry Vincent.  Were they complete failures as parents?  Most parents teach children that when you make a mistake, you make up for it.  But former Senator Harry Reid never did, never even tried to.

Turning to the US where Nancy Pelosi, Speak of the House of Representatives, launched an attack on the Democratically controlled Senate, blamed them for the continued illegal war, repeated slogans she was questioning only two years ago and much more.  The Barack Obama for President Pelosi's interview had an appalling write up in the San Francisco Chronicle.  That nonsense Pelosi offered was the least important thing about the interview.  (Market based strategies sounds an awful lot like privatizing -- especially when Pelosi brags of speaking to private business.  That's just one aspect of the interview that should have raised alrarms.)

On US withdrawal (partial) from Iraq, Pelosi declared "it is essential and it will happen and it will happen in my view with a Democratic president and that will begin in a matter of months and that is the optimism" she's feeling.  Let the rest of us know when her feet touch back down to earth.  A November election is nothing to pin all your hopes upon but that's the game Pelosi wants to play.

Apparently a Democratic president will be able to control that US Senate which keeps letting her down over and over.  She explained to the editorial board and reporters of the San Francisco Chronicle that she's all for withdrawal dates, it's that Senate that keeps insisting on 'goals': "The house keeps passing these bills with deadlines or, to accomodate the Senate sometimes, goals.  We just sent them another one we'll see -- they sent it back without the redeployment language, we'll send something back to them."

However, she wasn't done pinning the blame on the Democratically controlled Senate.  She was queried if the "Democratic Congress had pushed as hard as they could"?  She insisted,


"The House has always voted to have the redeployment of the troops out. . . .  From the House we have always fought but the senate [let's voice trail off into silence]"  I'm not really sure the best way for the Speaker of the House to conduct themselves is to declare war on the Senate semi-privately.  Maybe a war between the two houses of Congress is what it will take to end the illegal war?  If so, Pelosi needs to take her comments to a very public forum which, apparently, this meeting was not since it was not reported on.  She further instead of the Democratically controlled Senate, "they are guarding the president's desk."

It's the sort of thing that might have once fooled people.  Apparently the only fool in the room was Pelosi.  She was questioned: "Why not put withdrawal dates in this bill with the Senate and just stand up to them and say, 'it's got to be this way, we're not going to give in'?"  In stops and starts, Pelosi gave a response that appears below word for word minus a stammer or two.  If you can find more than three complete sentences in the following, wipe your glasses.

Nancy Pelosi: Well they see, that's -- there is a bi-partisan majority for that in the Senate -- Democrats and Republicans alike -- but there aren't sixty votes and so nothing would ever get to the president's desk.  And there just isn't a -- a -- that just won't happen -- it --  this has been the obstacle from day one.  Every -- we've sent now maybe a half  dozen times to the Senate.  They will not.  They will not and I don't think that there is a -- I don't, I don't believe as much as I have opposed this war from the start and have said from the start there is no  intelligence to support the threat that this administration is claiming so it has been a misrepresentation from the start, I know that.  But it is -- I don't think people would want to think, although we're sending the bill with conditions, that the money is supposed to be used for the redeployment of troops out of Iraq, that anybody's going to leave them high and dry.  And that's just really the -- uh - - uh dichotomy -- if that's the word and -- and -- and exists in the mind of the Am -- they don't -- they want 'em out but they -- we can't leave them high and dry.  We're saying this is the way we'll do it.  We'll do it with the conditions that this money is used to bring them home uh to leave some of there to fight al Qaeda, if that's still necessary, to protect our embassy but otherwise -- and that isn't a lot of troops -- but otherwise  they should be coming home if they don't go with these conditions --


Who was Nancy critiquing there?  Harry Reid.  Harry Reid was in charge of the Senate, he was Senate Majority Leader.


His vote for the war was a big mistake, he whines today.  But when he had the power to do anything about it, to make up for his error, to fix his mistake, he didn't.  Per Nancy Pelosi, the House was doing what it needed to end the war but the Senate wasn't getting it together.  That was the Speaker of the House pointing her finger at the Senate Majority Leader.

Harry Reid remains a joke.  It's too late for him to salvage his image.  And people really need to stop letting him lie.


But it's doubtful the press will ever hold him accountable while he's alive -- he mobbed up long before he entered Congress and the press pretended otherwise for years.

The same press that pretended things were going great in Iraq only eight days ago.  Remember?

While the western press was pretending otherwise, the people of Iraq have been suffering.


For example?  ALSUMARIA reports Basra Operations Command announced yesterday that they will be releasing protesters . . . shortly.  They insist that this is for the "protection" of the activists.  These protesters were demonstrating yesterday.  And "protection" included, apparently, also shooting one protester in the back.  That's at least the fourth time in recent weeks that Basra Operations Command have used "live ammo" on activists.   The third time was this past Friday. 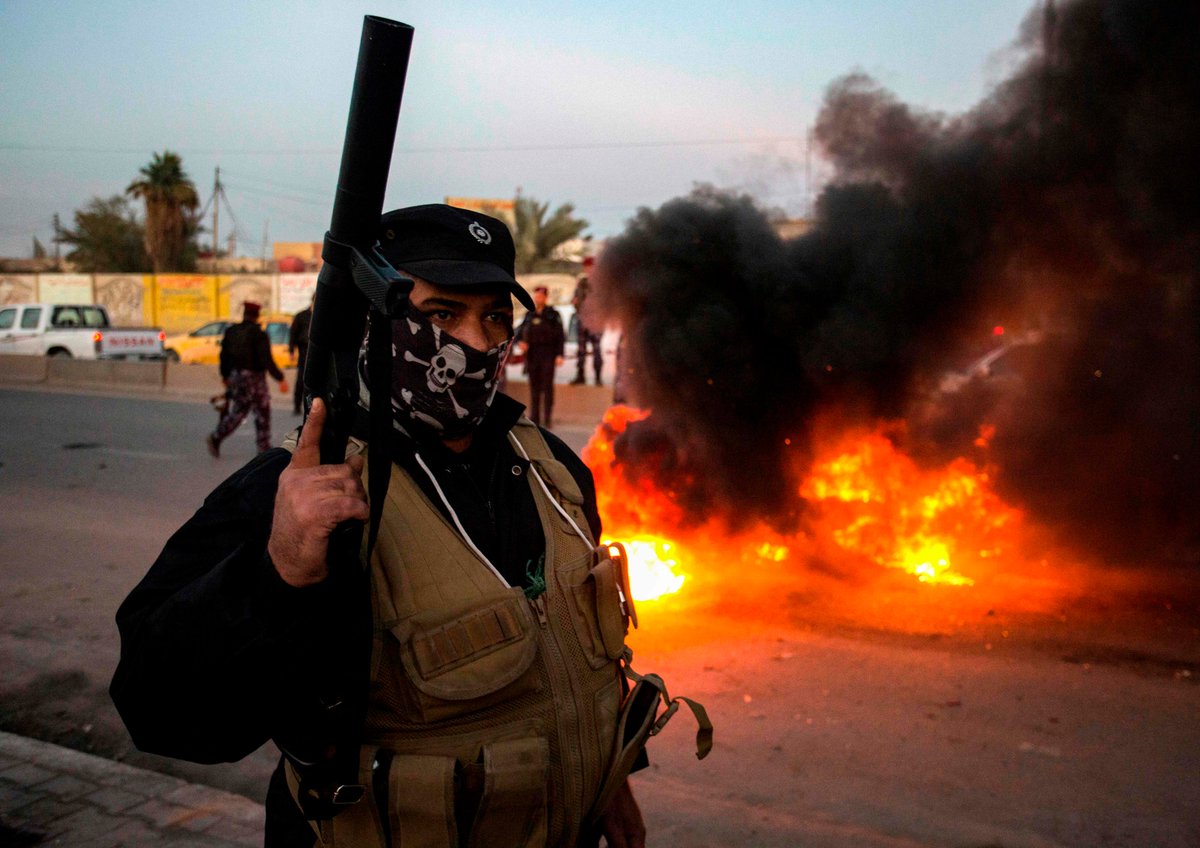 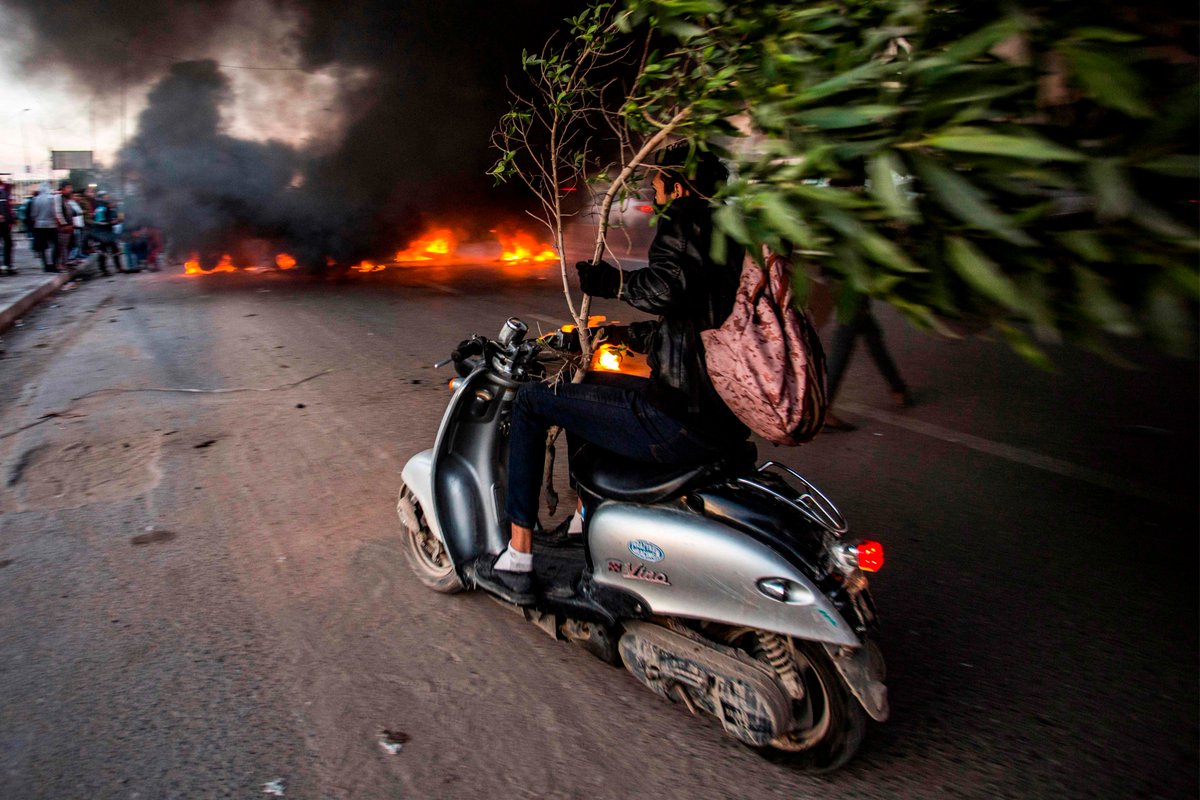 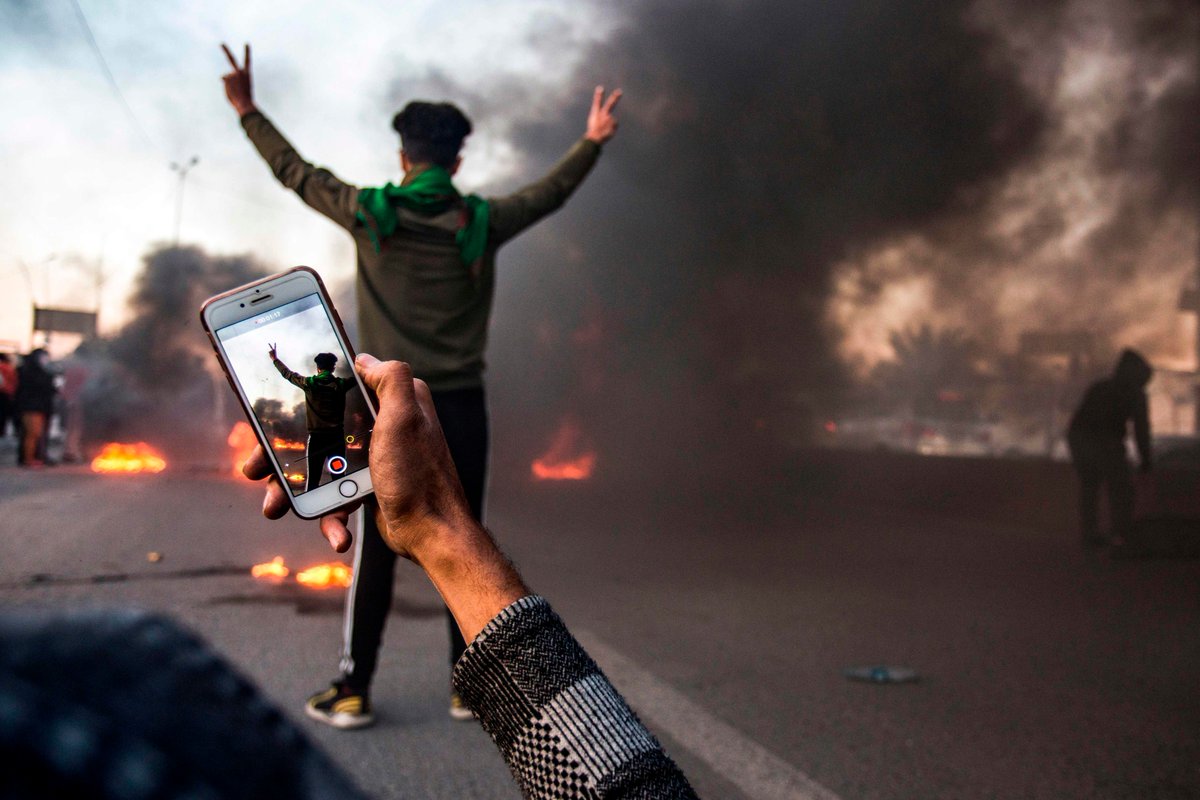 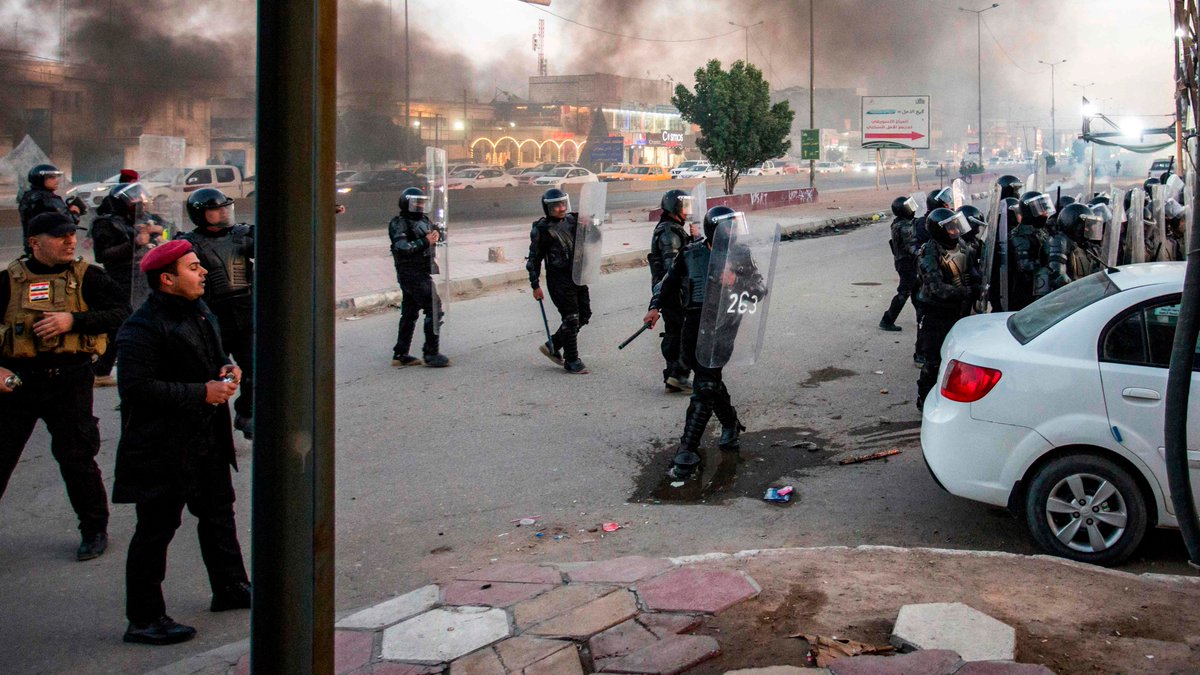 
Where's the western press?  Oh, that's right, it's "turned corner" time again as they, yet again, attempt to re-sell the ongoing Iraq War which hits the 16 year mark in two months.

Basra protests?  They've been going on since July.  The activists are asking for jobs, basic services, water that doesn't send you to the hospital if you drink it, etc.  It's too complex, apparently, for western reporters to grasp.  They're too busy selling themselves -- TIME magazine included -- as the saviors of the world, risking all to tell the truth.   Well, that's what they're saying.  Reality is far different from their empty lip service.  It's the Iraqi reporters covering the Basra protests who risk all.  As usually happens in 'liberated' Iraq when reporters cover actual events, reporters get arrested.  That's been happening repeatedly in Iraq for the last weeks in an effort to stop press coverage of the protests.

Never doubt that lazy asses in America with press passes have nothing when it comes to ethics or scruples.  They play like the press matters and they're interested in real stories but while Iraqi reporters risk their lives to cover protests, American reporters spend all day playing shocked at whatever they saw on a president's Twitter feed.

Another topic 'brave' reporters in the west keep ignoring?  US troops in Iraq.  As we noted yesterday, their numbers are increasing.

All this desire to report/proclaim "Donald Trump is a liar!"?  It apparently doesn't apply to war.  Because the US officially has a little over 5,200 troops in Iraq but in the last days that number has risen and, in northern Iraq alone, non-western outlets have reported an increase of 20,000.  We were discussing that in yesterday's snapshot -- a discussion corporate America media still can't have.

20 hrs ·
Informed sources reveal night movements by the US forces # towards some districts and areas of the province of Nineveh north of Iraq.

1 hr ·
Informed sources reveal the presence of more than "9000" US troops in "4" military bases deployed in the province of Anbar # - west of Iraq #, after withdrawing from # Syria.

But corruption continues in Iraq.  Billions have been . . . wasted?  No, stolen.  And more money is pouring in. 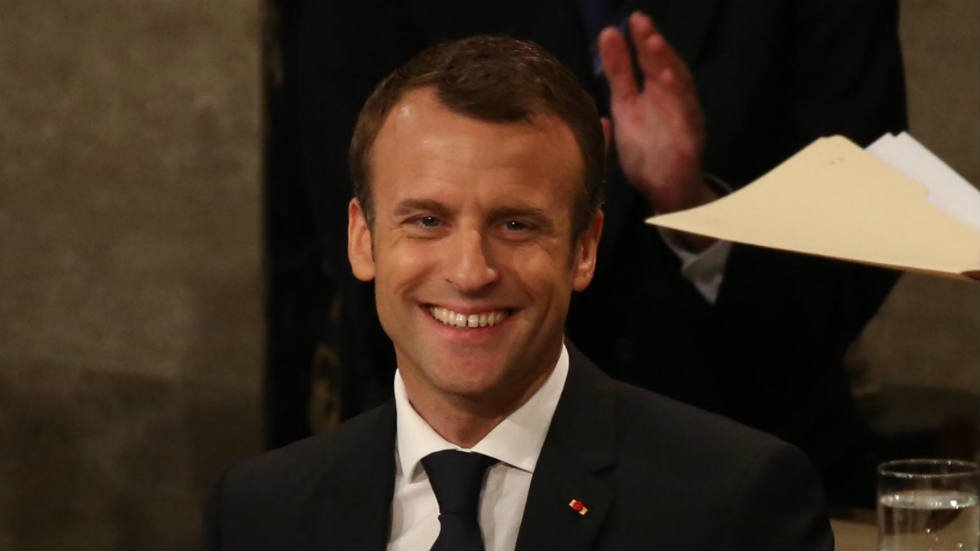 Yea!  France is going to toss in a billion!  Yea!  What politician's children are going to get rich this time?  It's not going to help the Iraqi people.  None of the billions have so far helped the Iraqi people.  There's a reason Iraqi is repeatedly cited for corruption in each of Transparency International's annual examinations.  But let's pretend otherwise.

Mokhalad Raad‏ @Mokhalad_Raad 5h5 hours ago
Corruption in #Iraq became a #lifestyle , bribe and relations lead everything in iraq. Even in non governmental works you find this matter, just a little who take positions by his own qualifications.
0 replies0 retweets0 likes


In case anyone forgot, Hayder al-Abadi promised to end corruption.  He couldn't even win a second term -- let alone end corruption.  Nouri al-Maliki, former prime minister and forever thug, facing protests throughout Iraq while the 'Arab Spring' was taking place in Egypt asked for 100 days to end corruption.  He wasn't going to end corruption, he just wanted the activists to stop protesting.  They stopped and, 100 days later, he announced he'd done nothing.  That's the way it 'works' in 'liberated' Iraq -- where the US installs one puppet after another -- all of them, strangely enough, right?, all of them cowards who fled Iraq and only returned years -- decades -- later when the US-led invasion took Baghdad in 2003.


Teaser for what I hope we discuss tomorrow . . . 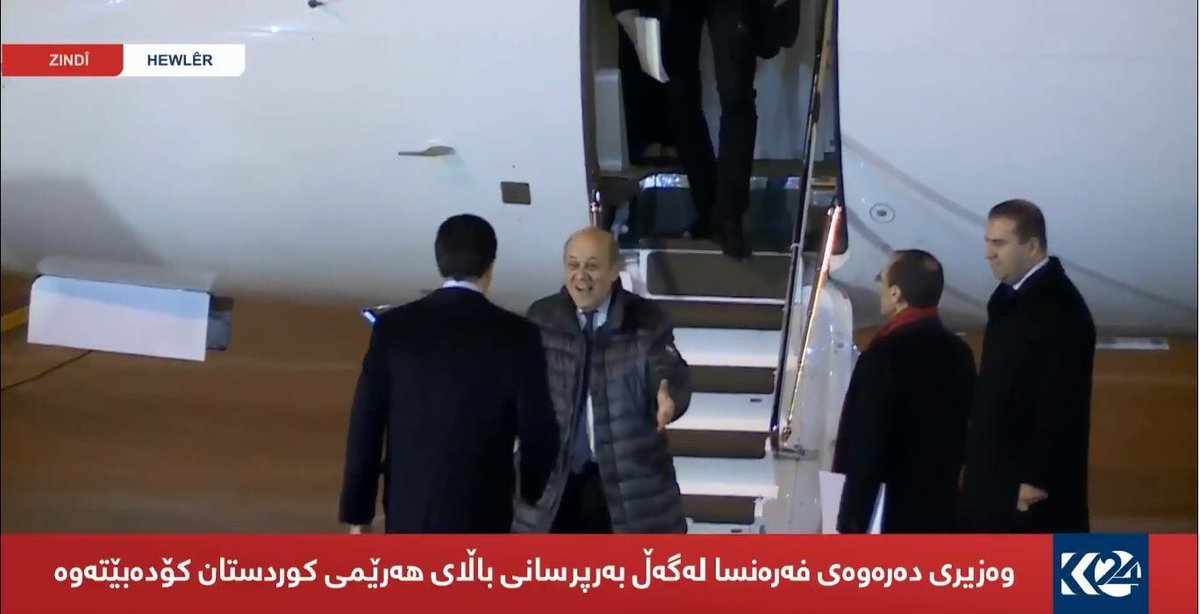