In Iraq, the question remains: Where is Saba Al Mahdawi?

*‏ @Asoul1996 1h1 hour ago
@UN_Women @SabaAlmahdawi has been missing for 3 days. The 35 year old activist and medic was kidnapped by armed men on her way home from Tahrir Square, Baghdad. The car plate is known and so are the perpetrates. The @IraqiGovt has done nothing to rescue her. #FreeSaba
0 replies0 retweets0 likes


In the US, another question remains -- why is Joe Biden still in the race?  Yes, trash like Alyssa Milano will forever try to prop him up.  Otherwise?  His support is dropping.  Young adult Americans have never been behind him.

Tom Gara is incorrect.  Joe Biden is not a baby boomer.  He predates the baby boom by a few years  Basic demographics argue the boom begins in 1946.

Joe's disrespecting young voters and, especially, young women voters, with his response to Lily Levin.  Cedric ("Joe wants your vote but he doesn't want to interact with you"), Wally ("THIS JUST IN! WORTHLESS JOE BIDEN INSULTS YOUNG VOTERS!") and Ann ("Neither Joe Biden nor Alyssa Milano give a damn about women") addressed this issue.


While some agree with Lily Levin:

servere‏ @servere13 Nov 1
@lilylevin_ : lily - I too am concerned but I am also a pragmatist. Biden’s not perfect but he has compassion earned by tragic life experiences; he has a good heart. Job #1: defeat Trump. In spite of your experience with him, he still has the best opportunity to win. Peace.
0 replies0 retweets0 likes


Lily can take comfort in the fact that Servere13 is a raging idiot.  In the Tweet above he wants you to know that Joe Biden is someone who "has compassion earned by tragic life experiences."  What a load of nonsense.  Joe does love to play drama queen and cry in public; however, there's no sign that he has compassion.  Compassion would not have supported an illegal war on Iraq -- a war that continues.  Compassion would not have looked the other way at Nouri al-Maliki's secret prisons and torture chambers and insisted Nouri get a second term after the Iraqi people voted him out.  Compassion would not have led to silence from Joe as Nouri went on to spend his second term targeting Sunnis -- this targeting is what led to the rise of ISIS in Iraq.  That happened under Joe's watch.  Drama Queen Mother Joe had a lot of misfortune and, goodness knows, he loves to whine about it, but there's no indication that this misfortune made him more sensitive to the needs of others.  And "he"?  I'm finding it hard to believe that a woman would write a defense for the Clinton marriage.  I think most women would either be silent on the topic or react the way Rosie O'Donnell did in her standup in the early '00s.  Hillary chose to be a doormat.  That's her choice.  But I don't see many women rushing forward to say, "It's true love!"  We tend to realize it's a man who knows he can cheat on his wife having his cake and his neighbor's cake and eating everything he can.  I guess, to some men, that might be an attractive marriage.  But women aren't really sitting around talking to each other asking, "Do you think the most romantic moment in the marriage was when Bill cheated on Hillary as governor or when he cheated on her as president?"


Along with an inability to relate to young adults, Joe's still got his Hunter Biden problem.

I didn't realize the leaker wasn't being named by the press.

That's the leaker.  If he wants to try to start impeachment, he needs to appear publicly.  He's not a rape victim.  He's someone who insists that someone, somewhere, saw something and passed it on to people who told people in a Faberge Organics Shampoo kind of way.


And, according to the leaker, eventually it reached him.

You can't make charges for impeachment from behind a screen.  He's a leaker, he's not the great and powerful Oz.


For weeks before the protests, there were ongoing discussions around the extent to which the public has become frustrated with the political elite. The protests, however, started in Baghdad as completely peaceful demonstrations. Groups that are far removed from any political parties were responsible for organising the demonstrations.
Yet, the security forces responded to the demonstrations with heavy-handed tactics. But as the protests continued demonstrators from southern and central areas of Iraq joined the movement. That is when the protests became more violent as a Shia-Shia battle began to emerge. Protesters burned down the headquarters and offices of Shia political parties and armed groups.

There are regional and international powers that have an interest in the continuation of the protests. They have resorted to the media to serve this interest. There is no proof the movement has received any financial or military support from an external power, however.


REUTERS notes today, "Internet access in the capital Baghdad and much of Iraq has been cut off, internet blockage observatory NetBlocks said late on Monday as the country experiences a wave of anti-government protests." 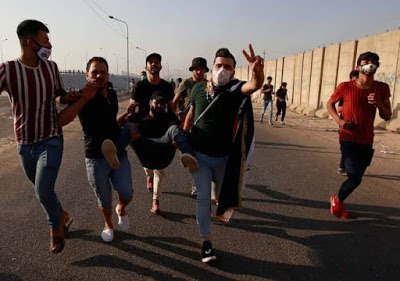 Rappler‏Verified account @rapplerdotcom 17m17 minutes ago
Cyber security NGO NetBlocks says that the blackout is 'the most severe telecommunication restriction to have been imposed by Iraq's government since protests began' on October 1.
0 replies0 retweets0 likes

ALJAZEERA reports 8 protesters killed yesterday (five in Baghdad).  REUTERS notes that 13 have been shot dead in the past 24 hours.  And Mina Aldroubi (THE NATIONAL) reports:


Talks on amendments to the Iraqi constitution began on Tuesday as internet access was cut in Baghdad amid renewed clashes in the capital.
The first meeting of a parliamentary committee that was formed last month to oversee the drafting of constitutional adjustments took place in parliament, with officials hoping it will help meet the public's demands and calm weeks of widespread protests.
Iraq has experienced massive anti-government demonstrations in Baghdad and across the mostly Shiite south since the beginning of October.
Protesters are calling for an overhaul of the political system established after the 2003 US-led invasion.
"The committee is represented by Iraq's three main components and all minorities," an Iraqi official, who wished to remain anonymous, told The National.