Monday, January 25, 2021.  With or without attention from the US press, the Iraq War drags on still.

The disappointment that is Joe Biden, get used to it.  SOVEREIGN WEALTH FUND INSTITUTE reports of the new president:

Big pharma is smiling big right now. The big three insulin producers are Eli Lilly and Company, Novo Nordisk A/S, and Sanofi S.A., in which they dominate more than 90% of the world insulin market by value. After swearing-in, U.S. President Joe Biden’s HHS froze the Trump administration’s December 2020 drug policy that mandates community health centers to pass on all their insulin and epinephrine discount savings to patients.

The rule was finalized in late December 2020. The drug rule was put in place to benefit patients who have a hard time paying for expensive insulin and allergy medication. Former President Trump campaigned on lowering the price of important pharmaceutical drugs like insulin, which is used to treat diabetes, and epinephrine. Diabetes afflicts over a quarter of Medicare beneficiaries and drives billions in Medicare spending every year. More than 20 million Americans have diabetes, in which the body fails to properly use sugar from food due to insufficient insulin, a hormone produced in the pancreas.

Jackson Hinkle covers it in the video below.

And it is price gouging.  Big Pharma is profiting and Joe Biden's going to help him steal from people even more.  Steal?

It is theft.  They're not paying off some big investment (subsidized by the government) into coming up with insulin.  As Senator Bernie Sanders noted in July of 2019:

The inventors of insulin sold the patent for just $1 so it would be available to all. 97 years later, Americans are dying because drugmakers like Eli Lilly charge $300 for a vial of insulin. Tomorrow I will be joining diabetics to buy insulin in Canada for one-tenth the price. 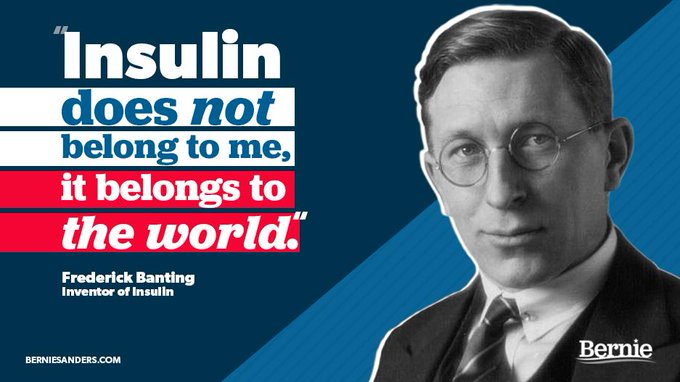 The patent was sold for one dollar.  Years ago.  And yet Big Pharma wants to rip you off and risk your health and Joe Biden's on board with them.  How very pathetic and telling about how the next four years will go.

When we covered this topic at THIRD, we ran the following photo. 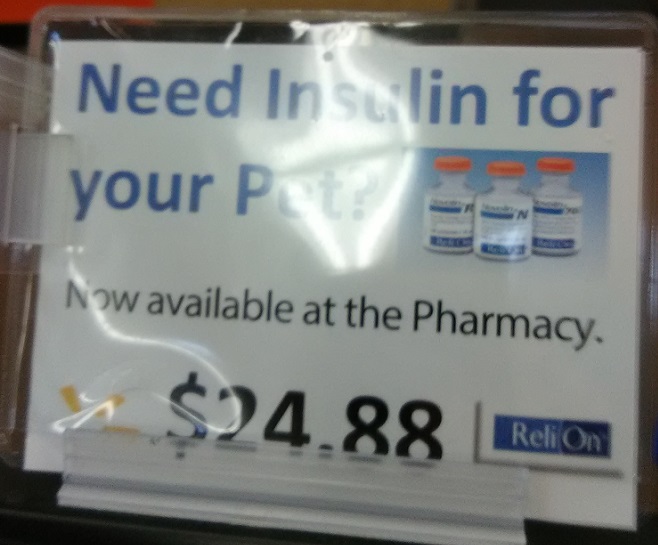 Walmart knew what it was doing and so did the customers who saw the sign in the drug store window -- Walmart was saying to those who can't afford insulin (a huge number of people), 'We'll sell you pet insulin.'

Joe Biden's addiction to for-profit will be the death of many Americans.

And outside of the US?  Over at THE NATION, they pretend to car about Iraq for a few seconds while pointing fingers.  Please note, they do this by publishing an article already published elsewhere.  They have how many writers on the payroll and not one can write about Iraq.  Telling, isn't it?  Danny SJursen's long article (already published elsewhere) includes this:

It’s increasingly clear that Washington’s legacy wars in the Greater Middle East—Iraq and Afghanistan, in particular—are generally no longer on the public’s radar. Enter an elected old man who’s charged with handling old business that, at least to most civilians, is old news. Odds are that Biden’s ancient tricks will amount to safe bets in a region that past US policies essentially destroyed. Joe is likely to take a middle path in the region between large-scale military intervention of the Bush or Obama kind and more prudent full-scale withdrawal.

As a result, such wars will probably drag on just below the threshold of American public awareness, while avoiding Pentagon or partisan charges that his version of cutting-and-running endangered US security. The prospect of “victory” won’t even factor into the equation (after all, Biden’s squad members aren’t stupid), but political survival certainly will. Here’s what such a Biden-era future might then look like in a few such sub-theaters.

That's it.  One mention of Iraq in a sentence.  A shared sentence with Afghanistan.  "Generally no longer on the public's radar"?  Well, golly, Danny, doesn't really appear that they're on your radar either.

Thinks for keeping us uninformed, Danny, and thank you also to THE NATION for proving yet again to be a garbage dump of time and money.

While Danny's so 'circumspect,'  Dirk Adriaensens can and does cover Iraq (GLOBAL RESEARCH via COUNTERINFORMATION):

Is it the oil-resource curse that has brought the Iraqi people to this deplorable condition? Or, have the US-installed political system and after them the Iranian influence over Iraqi politics, been the main reasons behind mischiefs such as the case of “an estimated $239.7 billion has left the country illegally since 2003”, currently being inquired by the Iraqi parliament. Most of this money was indeed oil money, meaning that both oil and revenue have been conveniently syphoned away from Iraq, leaving its people in harrowing dearth.” [1]

A Transparency International report, published March 16, 2005, states that: “The reconstruction of post-war Iraq is in danger of becoming ‘the biggest corruption scandal in history.”[2]

The analysis underneath tries to give an overview – although incomplete – of the rampant corruption imported by the US invaders and optimized by its installed Quisling government. It is only one aspect of the total destruction of the Iraqi state. This is the story of a country that was targeted to become a failed state, by design of the imperialist and neoliberal US/UK elites, or should we call them “the organized-crime world syndicate”. The sectarian political and neoliberal economic system they installed is totally broken, beyond repair. The Iraqis call the period after the withdrawal of US combat troops “the second face of the occupation”, leaving in place all the neoliberal sectarian laws the occupiers enacted.

The criminal activities of the occupiers are well documented, many times reported and analysed, but the US still refuses to accept responsibility and accountability for its gross violations of International Humanitarian Law. It’s very important that the true story of Iraq is repeatedly told, until it becomes part of humanity’s collective memory, because Iraq serves as a template for the nefarious consequences of what “humanitarian” imperial interventions really mean, as is the case for other “humanitarian” war zones, from Afghanistan to Libya. “Bringing democracy” is always the official narrative, the harsh reality however is destruction, plunder, submission, exploitation and oppression. The truths about corruption have to be documented, explained and repeated over and over again. Hence this article.

This is well formulated in the message that novelist, painter and poet John Berger (+ 02.01.2017) wrote on 18 June 2003 in support of the World Tribunal on Iraq initiative, the greatest achievement of the global peace movement ever:

“The records have to be kept and, by definition, the perpetrators, far from keeping records, try to destroy them. They are killers of the innocent and of memory. The records are required to inspire still further the mounting opposition to the new global tyranny. The new tyrants, incomparably over-armed, can win every war – both military and economic. Yet they are losing the war (this is how they call it) of communication. They are not winning the support of world public opinion. More and more people are saying NO. Finally this will be the tyranny’s undoing. But after how many more tragedies, invasions and collateral disasters? After how much more of the new poverty the tyranny engenders? Hence the urgency of keeping records, of remembering, of assembling the evidence, so that the accusations become unforgettable, and proverbial on every continent. More and more people are going to say NO, for this is the precondition today for saying YES to all we are determined to save and everything we love.”[3]

From the first days after the invasion, the US and its coalition partners created a wasteful, opaque and corrupt system in Iraq. Massive theft, fraud, bribery and crimes of all kinds have failed reconstruction, infecting the government and wider society. There are hundreds of fraudulent, incomplete, failed or useless projects that have cost Iraq tens of billions of dollars. Judging from the final results, the projects have delivered surprisingly little lasting benefit to the Iraqis. These corrupt acts are a clear violation of the occupier’s responsibilities under the Geneva Conventions, the UN Convention against Corruption (2003) and Security Council resolutions.

The vast corruption is one of the things that has fueled the 15-month and counting protests in Iraq.  THE NEW ARAB Tweets:

The southern Iraqi city of Nasiriyah has witnessed renewed protests calling for the release of activists and detainees.

A new party aimed at challenging Iraq's political class and representing the country's youth has been launched by the activists who fronted a mass protest movement in 2019.
A prominent leader of the "October Revolution," Dr Alaa al-Rikabi, announced at a press conference on Friday that the new Imtidad Movement would "confront the corruption of the current regime" in parliamentary elections in June.
He said the name referred to the party being an "extension" of the protest movement, which began in October 2019 and encouraged mass protests around the country until the coronavirus pandemic limited their ability to mobilise.
The Voice of Iraq publication reported that Rikabi announced the new party in nearby Samawah, instead of Nasriyah city, where he is based, because of fears about attacks from rival parties.
Tensions flared in Nasiriyah recently when security forces opened fire on protesters who had occupied a square in the city's centre, in which they had previously camped out until November, when they were removed and eight people were killed in clashes.
Protesters reoccupied the square a week ago, demanding the release of peers arrested in recent weeks. A policeman was killed in resulting clashes. On the same day, a senior lawyer and activist in Nasiriyah was killed during a raid on his home.

Kaamil Ahmed (MIDDLE EAST EYE) covers the same story.  They're alsod emanding the release of those who are missing.

MEHR NEWS reports this morning, "The Saberin news channel reported in a breaking news item that a logistics convoy of the American occupiers had been targeted on the Basra-Nasiriyah highway on Monday."  They note there were six strikes on US military convoys on Friday.

In other news of Joe Biden and Iraq, Yasmine Mosimann (RUDAW) reports:

The United States on Friday suspended a program that granted Iraqis refuge in the US in exchange for aiding American troops in Iraq, according to a statement from the state department.

“Effective January 22, 2021, the United States is suspending the Direct Access Program for the U.S.-Affiliated Iraqis for 90 days,” reads the statement from Daniel B. Smith, the acting secretary of state.

He justified the temporary halt to the program, which incentivized Iraqis to work with the US military, by saying they have identified individuals stealing documents from the state department’s Worldwide Refugee Admissions Processing System “to take advantage” of the program.

A new day dawning?  Feels a great deal like past horrible days.