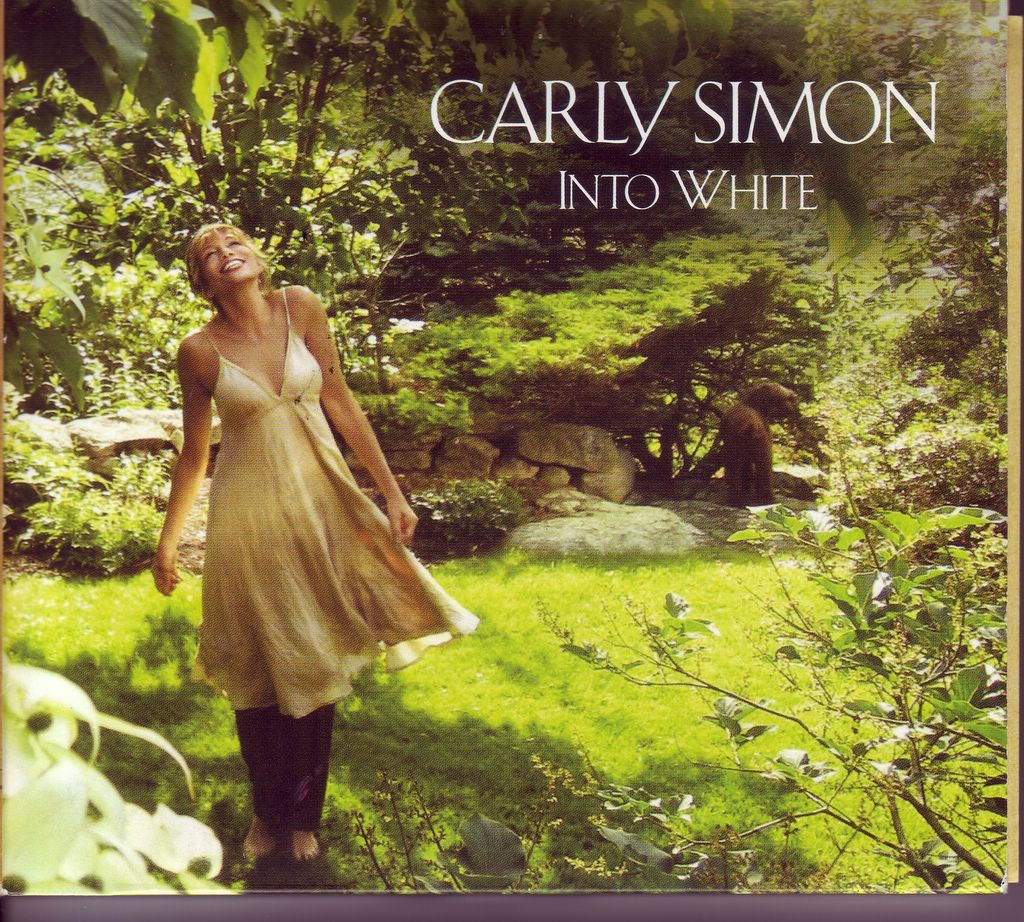 Kat: Carly Simon's latest collection of new songs is entitled Into White which finds her performing songs which are predominately decades old. So the question is: Why does the album feel so contemporary?

It no doubt helps that the songs are an interesting mix. Also adding assistance are some sparse arrangements and a light hand on the production.

But the thing is Into White sounds much more relevant than many albums of recent memory including Bruce Springsteen's recent tribute album to Pete Seeger.

Listening to it, I find myself remembering that "Somwhere Over The Rainbow" became the evergreen it remains to this day not due to The Wizard of Oz (wonderful movie) but because the song spoke to a war torn Europe. And not only does Carly's version make me remember that buried factoid learned many years ago, it has me grasping why.

Judy Garland's not being rivaled, let me be clear. But Carly pulls out the humanity in the songs that years of histrionic covers by the likes of Sam Harris have buried. She does something similar with the Beatles' "Blackbird" which tends to be rushed in most covers or lifeless. But there's something going on here.

You notice it in "Oh! Susanna." Do kids still sing that in schools? I remember my school days in the post-folk revival period. Eager teachers would have us singing that song and others ("The Erie Canal" was another) -- usually for six weeks before they hustled us onto square dancing. I'm doubting that they do that in schools today, but I could be wrong. (I know cuts in school funding have eliminated the opportunity for most music classes.)

I do know that seeing "Oh! Susanna" listed as track two didn't make me giddy or nostalgic for a grade where touch dancing was introduced just as most of us were starting to sprout breasts.

[I realize that line is "non-inclusive." However, considering the recent spate of 'male as universal' headlines and stories popping up in the New York Times, I've made an active decision to use the 'female as universal'.]

So there's Carly and company, offering up "Oh! Susanna" -- the tired horse that might need to be shot at this late date. They don't still send them to the glue factory, do they?

But the song works. I was listening with the remote in hand, at the ready, prepared to skip over the track, but it grabs you. I think the clue to why it works, why the album works, is most obvious in two tracks that Carly's recorded before: "her own "Love of My Life" and the Everly Brothers' "Devoted to You" (which is paired with their "All I Have to Do Is Dream" for one track).

Let's take track ten, "Devoted to You/ All I Have to Do Is Dream." The first half of the medly is the song she recorded (with then-husband James Taylor) as the 70s were winding down. You can hear that track on 1978's Boys In The Trees. It's nearly 30 years later so not many would expect it to be sung in the same exact key. A lower key would be acceptable, even understandable, all this time later. But that's not what happens.

It gets bumped up. In fact, Carly's singing in high keys throughout. She has a beautiful alto, no question. It's steady and comfortable. By straining for notes, intentionally, she's bringing an additional element to the songs and I think that may be the most important component of the album.

Diana Ross hit with the Supremes while singing in a higher key than she was used to (Holland-Dozier-Holland grasped the power her voice had when reaching). As a solo artist, there are many examples of her not wanting to record in a key she had to reach for. ("Touch Me In The Morning" may be the most famous example, but it is far from the only one.) When she slides over to RCA, from Motown, in the 80s, she's really not interested in reaching for that range. The plus is that, on some tracks, she finds a deeper voice that was quite beautiful. However, if looking at her late 80s and 90s output and wondering where the hits were, it's really only on "If We Hold On Together" that she tries for that sound.

What happens when a singer leaves their natural range and reaches? Voices can crack, it's a lot more work for the singer, but it adds an element. On this album, Into White, it brings a new quality. As Carly's demonstrated throughout the year, she's a very strong singer and her voice is a powerful instrument. But on this project, by reaching for a higher range, she brings another quality. The songs are largely a trip through American popular song history. But instead of feeling you've been overwhelmed with a revue, you're left with a feeling of discovery.

Rebecca, Elaine and I have talked about Into White a great deal (links go to some of what they've written of the album) and agree that it's a trip through the nation via popular song that seems timely and speaking today because of this quality in Carly's vocals. She sounds like she's discovering the songs and the sense of discovery or awakening in the nation has been the air (though undetected by many desk jockeys) for months and months now.

In some of the press, it's been noted that Sony wanted this album and wasn't overly keen about an album of Carly's original compositions. How sad for them (and how musically ignorant of them). But the album stands as a testament that Carly, a highly gifted songwriter (with the Oscar, Golden Globe and Grammys to prove it), is also an amazing singer. She's demonstrated that on her own songs and certainly on My Romance and Moonlight Serenade. However, she's achieved something more on this album. You already know her voice is amazing, you already know she's a wonderful singer of song. What she's done here is create a mood for the entire album. In one interview, Carole King's Tapestry was noted. I can understand that but I really think this is less a Tapestry and more of a photo album. It's photos of America's strength. Not in a Kate Smith kind of way, but the quieter moments, the moments of the people. The voice reaching for those notes reminds me of the people reaching to be more than their elected officials want (or want for them) which really works as document of where we are today in the United States.

But what I want to note is that this is an album recorded with great care (blind luck doesn't produce something like this) and that, to slightly steal from Carly's "Forever My Love," in looking forward by looking back, Carly captures the mood of the country in a way that many have given up trying to while others struggle. It's amazing that she managed it with these songs; but she did. Into White could have sounded like a stop-over project while Carly works to convince Sony that there is a market for her own songs (a sign of how sad things are in the corporate world, that Carly has to market herself to the company she's signed with). Instead, she's managed to comment on the world today. I'm still amazed at that feat. Amazed that I listen to the album from start to finish -- even to songs I didn't expect to enjoy. The obvious ending here is some turn of phrase on her hit "Nobody Does It Better." Instead, I'll note that, all these years later, she still "knows what to do me, what it does to me." ("You Know What To Do To Me" off Hello Big Man.) At a time when many are coasting, Into White demonstrates just how pertinent she remains. Forget the New York Times non-stop "Man in the News" features, sometimes it just takes a strong woman to break through conventional truths. Carly Simon has done that yet again.


carly simon
into white
diana ross
bruce springsteen
sex and politics and screeds and attitude
like maria said paz
kats korner
the common ills
Posted by Common Ills at 8:09 AM