Kat's Korner: Holly Near Shows Up 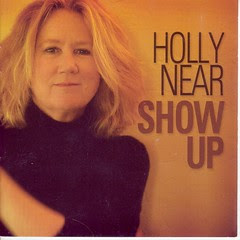 Kat: "Where are the reviews?"

That's the refrain in the e-mails of late.

Week before last, we were all headed to a book event. Dona asks C.I., "Ruth knows she's not doing a report, right?"

Ruth's benched. The week in TX. The week driving down there with Treva, Rebecca, Flyboy and Ruth's grandson Elijah. The week coming back. Busy times. Tired.

I'm crouching low like it's 8th grade math, trying not to get called on. Easiest thing in the world is to say, "I'll do a review for Saturday."

Actually, easiest thing in the world is to stay silent and keep crouching.

So that's what I do.

I'm not off music. Yeah, there's a lot of residual anger over Tower closing. But there are two new CDs I'm listing to pretty often. Thinking maybe there's a review in one of them. Thinking 'bout all the e-mail coming in with the question: "Where are the reviews?". Thinking bout how I excel at putting things off.

Aunt used to sneer I'd be late for my own funeral. One day she pissed Mom off who snapped back, "No, she'll outlive us all because she'll keep death waiting."

We'd arrived at the bookstore. Hurrying inside, I gave silent thanks to all the fallen saints: Cass, Janis, Jimi, Jim, John, Kurt, Nina . . .

Same weekend, we're working on what's becoming a tough piece for The Third Estate Sunday Review. We're spit balling and stalling, maybe some of the boys are free balling? I don't know. I do know I'm hitting a wall and voices over the phone are as well. Looking at the faces of Jim, Dona, Ty, Jess and Ava, it's obvious they are as well.

All of the sudden, in one of those bits of brilliance, C.I. leaves the circle to stop the music we'd been listening to and put a new CD on.

What the hell is that?

I can't place the voice, but it's an interesting way to start an album. It's sort of like children skipping, the sort of thing Cyndi Lauper did when she made a name for herself, back before everyone just knew the best thing for Lauper was to have arrangements like everyone else. (Those who predate Lauper's music should think of "Once Was A Time I Thought" by the Mamas and the Papas -- enjoyable but not obvious track.) Track one gets going and I'm not thinking what an interesting opening of track one, I'm thinking, "Damn, great song." I'll later learn it's "Family Band." Right now, I'm in the dark as track two comes on.

Half-way in, it will hit me that it's Holly Near. It'll come like a "Well of course the sun rose this morning" thought as I'm listening to:

And I feel the witch in my veins
I feel the mother in my shoe
I feel the scream in my soul
The blood as I sing the ancient blue
They burned by the millions
I still smell the fire in my grandma's hair
The war against women rages on
Beware of the fairytale
Somebody's mama, somebody's daughter
Somebody's jail

"Somebody's Jail" is the name of track two, as I'll learn quickly enough. At the time, I'm just thinking of how it seems to be capturing a number of thoughts we're having. Is it too much to crib from Roberta Flack's second big hit and say it was like our diaries had been found and each word read out loud? It's like universal truth being spoken for the first time only it's being sung and it's an amazing song.

Paul van Wageningen deserves special credit for the drum work on this wonderful song. Many more amazing songs will follow. I quickly learn, that first listen, never to tell myself, "Okay, that's my favorite song." A week of listening to this CD pretty much non-stop and I'd argue my favorite song is the last one, "Oh River."

She wrote "Oh River" and "Somebody's Jail." She sings other people's songs on the album. She does a wonderful job with Jackson Browne's "Lives In The Balance" but I've always felt that was pretty much a fool proof song as long as someone didn't put an accordion onto it. She does a fine job with Jane Siberry's "Bound By The Beauty" and with the centuries old folk song "Drunken Sailor." But Laura Love's "I Want You Gone Too" is the one I still marvel over. Near's added some words and they only enhance the song. It's a kiss off song, it's a political song, it's a pissed off song.

With Michael Butler, John Bucchino and Jan Martinelli, Near's written the title track which, in the opening, pays respects to "Jailhouse Rock." Threw me for a few seconds, but aren't we all living in someone's jail these days?

At a time when the New York Times decides enough has been written about the fact that MP3s are today's singles and the market has shifted back to singles that the paper can finally weigh in, Show Up is the sort of the album that reminds you why one song wasn't enough back in the day.
One song isn't enough for this sort of broad vista. A pick of a few personal favorites might get you a best of collection but it's not going to provide the shadings and additional meanings that a real artist at the top of her game can do.

The tension in "It's About Time," the intensity of "Drunken Sailor" lead up the release that is "Oh River." MP3s, like singles before them, can be wonderful candy, but for a meal you need a real landscape and for a wonderful meal you need someone who knows what to add where to enhance the entire experience. "Rockin'" is an obvious description for Show Up but, if I can drop back a little further, I think "cookin'" describes it equally well.

Put on the CD and grasp that despite all the talk of new formats, of mergers and panic, the whole thing comes down to music. That may not make the Stats Boys, always eager to flash the back of their baseball cards, happy but then they probably aren't urging to listen to anything that's not in this week's top ten. ("With a bullet!") I am. And if you're looking for a musical experience, you'll find it on Holly Near's Show Up.

the common ills
Posted by Common Ills at 11:55 PM