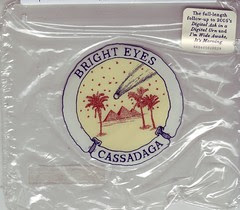 Kat: The quotes from Stevie Nicks' "Enchanted," off her Wild Heart album. It's what echoes in my mind when I listen to Bright Eyes' Cassadaga which, like the quote, is haunted by what was, what no longer is. That's the thread running through song after song on the new CD.

Enclosed with the CD is a small booklet from Saddle Creek which lists various label releases including Cassadaga. They describe it: "Cassadaga brings a newfound sophistication to the Bright Eyes sound. A swirling, euphonious record, at times bursting with bombastic confidence and country swagger, and at others loose-limbed and mesmeric." I respond, "Blah, blah, blah."
But it does explain where some of the reviews are getting their cliff notes.

The first track, "Clairaudients (Kill or Be Killed)," may throw you. There's a woman (a psychic, presumably from Cassadaga, Florida) speaking and these sirens. Now that may fit the "newfound sophistication to the Bright Eyes sound" for some. Me? It only brought to mind Cass Elliot's "California Earthquake." Lyrically, it also conjures the same imagery of the end and it's an attention getting, eye opening track, no question. I don't think it's representative of the album and I don't think we're hearing a new sound.

Don't get me wrong, I think this is a great album. It will likely make my picks in December for best of 2007. But I'm not hearing a "newfound sound." What am I hearing?

Motion Sickness: Live Recordings. As I noted when I reviewed that live album in 2005, onstage, I love Bright Eyes. And maybe if you've never caught Conor Oberst live, you listen to the studio albums and are . . . well, enchanted. His song writing is certainly strong enough to fascinate. But seeing the band live and then hearing a studio release has always been, for me, like hearing a tribute band's recordings. It just doesn't make it for me.

A track here or there may. But it's all too smoothed over in the studio. That's why I loved Motion Sickness: Live Recordings and, here's the thing, that's why I love Cassadaga. I don't think the band has a "newfound sound" so much as they're finally starting to cook in the studio the way they've always done onstage.

Currently on Real Player, the most downloaded song from the CD is the second track "Four Winds." The opening track? Sixth most downloaded. When the music is really cooking, it's wonderful but, like "I Feel The Earth Move" on Tapestry, it really draws attention more than captures the album itself. "Four Winds"? It's less interested in sound effects and owes a nod to "The Night They Drove Old Dixie Down." In fact, due to the packaging, I honestly thought that was the song Bright Eyes was about to perform before Oberst started singing.

Let's talk about the packaging because Maggie's got the CD and had no idea about it. "Dog faced apologists pleasing themselves on the burning sand." If you have the CD are you wondering, "What the hell is Kat talking about?" There are five spaces/sleeves that appear to have a tiny design on them. The "SPECTRAL DECODER" (on an inside flap) will allow you to see the actual artwork and phrases that are on the five spaces/sleeves. You'll see a floating coffin being pushed by a hand in one illustration, a bearded man with his hand over the earth, etc. Push across the spaces/sleeves to discover that which is hidden.

"That which is hidden" may have been a theme they were going for and it may be very well be there but the songs and the notes to "Breezy" (Sabrina) do more to carry out the the album's haunted reflection/loss.

"If The Brakeman Turns My Way" is the third song (and the second most popular download at Real Player). It may make some 90s listeners a little sad. It cooks in the way that Counting Crows briefly did. They haven't been able to get back to "Mr. Jones," "Anna Begins," or "Round Here" in ages.

I hear a lot of influences on the thirteen tracks and that's not intended as a slam. When a band's cooking, they're often tossing out a nod to this influence or that. There are entire Rolling Stones' albums that exist for those nods to influences. The key is do you do anything with those influences?

On this album, they do which is why "Hot Knives"' debt to "I Got You Babe" is more than fully paid before the song's half-way over. Lyrically, it's a story song, the sort Cher rode the charts with in the early 70s ("Dark Lady," "Half-Breed," "Gypsies, Tramps and Thieves," etc.). In fact, think of it as a sequel/twist beginning about mid-way through "Dark Lady," after Cher catches her cheating man with her psychic: "The Wife forgave the Mistress for she only entertained/ The pain was gone the instant she cleared her throat to speak her name . . ." Dark Lady, light them candles, indeed.

If anyone's reading this and thinking, "Kat's down on this album," I'm not. Down with, certainly. But I made the mistake of reading the reviews for this after I got the CD and what they're reviewing isn't what I'm hearing.

I'm hearing a wonderful album, absolutely, but the critics seem to be more interested in flashing their wordage and attempting to play amateur psychologist. "Oh, this song's about Winona!" or "Someone done Conor wrong big time!"

I'm not usually eager to read reviews. And I rarely do before I write my own. But this is a really wonderful album and I thought, "Surely the Stat Boys must be talking about the ins and outs, the tour through musical history, the highs, et al?" I was wrong. They're really interested in attempting to figure out who Conor's shared sheets with -- and gone on to write about -- but they don't seem to be able to tell you one thing about the album itself. They may hide this by tossing out a lyrical couplet every now and then, but they're really not addressing the music.

They're dropping back to the two last studio albums and tossing out their stats and doing everything but capturing the listening experience. A few aren't too crazy about "Make A Plan To Love Me" -- "maudlin" is a term that's been tossed around. They seem bothered by the female backup singers and, you have to wonder, have the stat boys never heard of Leonard Cohen?

There are about a dozen nods going on (musically) in each of the thirteen tracks on the album. The band (Oberst, Mike Mogis and Nate Walcott along with guests) pulls it off. And the nods make perfect sense.

Think about your first crush, your first kiss, your first anything. Chances are, a good portion of you aren't just remembering a face, you're remembering a song because a large portion of us associate songs with certain periods in our life. In the new issue of Ms. magazine (Spring 2007), Sandy Boucher notes that, in "Working-Class Hero," discussing her 40-year friendship with the late, great Tillie Olsen, who suffered from Alzheimer at the end, still "wholeheartedly sang along" whenever musicians visited. Another article I read recently -- possibly in the science section of the New York Times -- noted that stroke patients who might lose some portions of memory tended to remember songs from before their strokes.

So it makes perfect sense that songwriter Conor Oberst, who wrote 11 of the tracks and co-wrote the two others, would associate looking back, memories, with songs. So what's Conor looking back on?

I didn't really see that answered (or even noted) in the Stat Boys' reviews. He's looking back on a time when things weren't so mad. There are lyrics that address the sorry state of the country today and there are songs that address an affair that ended badly. In all of them, there is a remembrance of the hope and promise that was originally there. In fact, the relationships include his relationship with his own country.

Last week, Toni, Dak-Ho and I were again listening to the album and Toni, commenting on the lyrics, said, "It's like Bob Dylan without all the melodrama of floods and Old Testament wrath." "Or the incessant religious conversions," added Dak-Ho. And it is true, that regardless of which religion he's claiming, Dylan more and more seems only able to sing of damnation. Though that thread was always present in his writing, it's dominated for decades now. He's turned into an old crank, out on the sidewalk, screaming, "Repent! Repent, you sinners! The end is nigh, repent!" Who would ever have guessed he'd want to go out like Tony Perkins' character in Crimes of Passion?

Now Toni thinks he goes to that well (over and over) because it gives his later work the impression of gravity and depth that's honestly not there. If that is the case, he should make the time to listen to Cassadaga. "Everything, it must belong somewhere," Conor sings in "I Must Belong Somewhere" and it packs more weight than any of the Jimmy Swaggart-like scare tactics displayed in the likes of "Dark Eyes."

Dylan's limited by the fact that he was never a singer and the voice has only gotten worse. But Conor Oberst can invest a line with meaning, he can add a little vocal trick, a hiccup, that makes it much more plaintive and far less "anthemic" (or "bombastic").

There's a lot of weight and depth in his lyrics and I've avoided the temptation to just drop in lyrical quotes and let that speak because, honestly, it can't. It'll give you an idea but you really do need to hear him sing the line.

You've probably heard that and known it not to be true. It usually isn't. It's usually a cop out when some man gets called out for a sexist or racist song and he'll offer the lame defense of "You can't just go by it on paper, you have to hear it sung." And the ones saying that usually can't sing. Conor Oberst can sing and he seems to be growing a bit more comfortable with his voice (a bit -- part of the reason they always sounded better live in the past was because Oberst felt a freedom onstage that he never did in the studio). Whether that's inspiring the band or he's inspired by the band or some combination of the two, Bright Eyes has made the album that those of us who love them in concert can really listen to without thinking, "I bet this is going to sound incredible in concert."

That's the thing about Cassadaga, with nods here and there, full of references, Bright Eyes finally delivers the goods in the studio. I hate ranking so early in the year because, as I live with an album, I find things that I didn't notice before and some that improve with repeat listens. A Bigger Bang, the Stones' last album, was a CD I loved -- or thought I did until repeated listens made me love it even more. But if I had to pick right now, based on the listening experience thus far and what albums I've heard this year, Cassadaga would be number two for the year. That's not a bad rank and it's only the fact that Holly Near achieved musical perfection on Show Up that keeps Bright Eyes out of the top spot. It really is that good.

[C.I. note: This entry has been moved. Kat posted it after this morning's entry but changed the time because she wanted to be sure Laura Flanders' guests were the top post. RadioNation with Laura Flanders is now on, so I'm moving her review to where it would have been.]
Posted by Common Ills at 12:45 PM