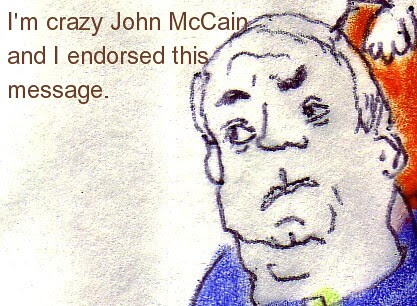 When The John McCain Showboat Express went to Baghdad, it came up with it's bumper sticker: "Vote Insane! Vote John McCain!" But it didn't have the ring to it that Crazy John McCain was looking for. Now he thinks he's found the equivalent to 1992's winning slogan of "Hope Not Fear" (the Clinton-Gore slogan):

Well again, I disagree with what the majority of the American people want.

He tested that out on Sunday on 60 Minutes and, in his cracked mind, he's convinced it's a rallying cry. "I disagree with what the majority of the American people want! Yee-ha!"

With the help of a blue screen, he intends to impose himself onto Slim Picken's Air Force Major T. J. "King" Kong character (Dr. Strangelove or How I Learned To Stop Worrying And Love The Bomb) as Kong rides the nuke through the skies. It is then that Senator Crazy will cry out, "I disagree with what the majority of the American people want! Yee-ha!"

Crazy John McCain will announce his candidacy for the GOP 2008 presidential nomination hours before his new ad campaign begins airing.