Kat's Korner: Hold Me Down

Kat: In a really bad summer of music, there were a few bright spots. Take Augustana. Everything's that missing in Coldplay's Viva La Vida can be found on Agustana's Can't Love, Can't Hurt. Is it art? 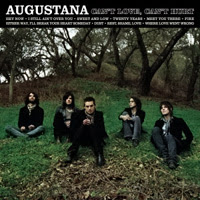 It's not anything you'd want to hang on a wall but do most things on your wall get your heart pumping and your ass shaking?

Augustana's "Boston" (heavily featured in Scrubs) put them on the radar but it's the live shows that are putting them on the map.

Can't Love, Can't Hurt is so far beyond 2005's All the Stars and Boulevards that it frequently doesn't even sound like the same group. Seeing them live will only confuse you further. I caught the band live this spring when they were early into their tour and again later this summer when they were a support act. If there's a better arena and shed band to emerge this year, I've missed out. Live the new songs are a little rougher and a lot more thumpin'. So much so that I'm expecting the next album to be another huge leap for the band.

This growth may make listening to the latest CD a disappointment if you catch them live first; however, Can't Love, Can't Hurt provides you with "Hey Now" and "Sweet and Low." The first is a rocker (or sounds like it until you hear them perform it live -- again, they're reworking the album on the road). It's also a song lyrically that clues you in: "Chris Martin has entered his Rod Stewart phase but we're making music."

"Carry me all the way," Layus sings in that song and the energy completely carries it and the CD. On the slow-tempo "Fire," energy is really all that the band has going for it and they put it across.

If you haven't caught the band live, you'll love Can't Love, Can't Hurt. If you've caught them live, you know they've already moved beyond it. In which case, I suggest you skip the regular version of Can't Love, Can't Hurt and instead purchase the deluxe version which includes four additional tracks -- two are videos. "Hey Now" and "Sweet and Low" acoustic are more than enough, even after sweating through one of their high intensity performances, to get you excited all over again.
Artist Site
More Videos