Kat's Korner: Labelle's neither "back" nor "now"

Kat: The good news is Labelle's sort-of 'back.' The bad news is that after decades apart, they couldn't pull together a solid album. 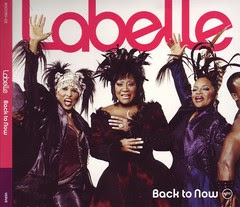 Patti LaBell is in fine voice throughout and that will, no doubt, please many and be more than enough to results in some sales and downloads. Labelle fans, however, may be thinking, "Uh, what is this? Diana Ross & the Supremes?"

"& the Supremes" comes along when the girl group is over and it's just about Diana. (And that's not specific to Diana Ross despite what the revisionary history would have you believe. "& the Miracles" also demonstrates Berry Gordy's efforts to single out a solo performer.) Labelle started out as the girl group The Bluebelles and morphed into Labelle -- a group where Patti was surely the dominant voice but not the sole one.

Today Labelle's work is largely reduced to two artifacts: the disco single "Lady Marmalade" and Gonna Take A Miracle. The former may be seen as a Patti solo single but the latter, an album the group did with Laura Nyro, shows off the group dynamics that made Labelle such a force.

The new CD is Back to Now and it demonstrates very little awareness of group dynamics. It's basically a Patti solo album that Nona Hendryx and Sarah Dash do some guest backing vocals on. The album kicks off with "Candlelight" which keeps Patti front and center vocally but has enough intricate backing vocal work that you are aware Labelle is a group. Too many other tracks treat legendary pioneers (and equals) Dash and Hendryx as if they were the invisible but talented back up group The Sweeties (a backing group Patti has frequently used throughout her solo career).

The album could have used a lead turn at the mike by all three ladies but that was not to be and it goes to someone's ignorance of what the group was and what it respresented. That ignorance is on grand display in the album's worst track: "Rollout." "Rollout" isn't just bad, it's offensive.

"Ladies, ladies, there comes a time in your life when you got to do some things that you never thought you would have to do!" Patti LaBelle announces at the top of the track and who knew she was referrring to abusing and diminishing the act of singing, disgracing women with half-baked empowerment and plagiarism?

Starting with the first, it is appalling that the CD which refuses to treat Dash and Hendryx as equal partners in their own group is more than happy to tweak Patti's voice with various special effects that make her sound less than human. Moving to disgracing women with half-baked empowerment but still with this first point, Patti starts out singing, "I ain't your super woman, I ain't your Wonder Woman, I ain't gonna wash your clothes, I ain't the floor you're walking on . . ." Oh, goodness, Patti's doing a song about a woman who can stand up for herself, right? Hell no. We've got Wyclef ruining the whole song with his 'rap'. Is the song supposed to be saying women are so disgustingly pathetic that they need a man to defend them?

Seriously, don't give me this s**t about female empowerment and then turn the song over to a man. Would Helen Reddy have been fine singing just the verses while turning the chorus of "I Am Woman" over to Paul Anka? Hell no. And I'll be damned if I review this CD and not point out that a song about strong women damn well doesn't turn the song over to a man. It especially doesn't do that when it has nothing to offer Sarah and Nona. Sarah and Nona are rendered invisible on this song -- as they are on far too many other tracks -- but there's time to bring on Wyclef to 'rap' about female self-empowerment?

On the last part, there apparently wasn't time to write a full song. The song lists five writers including all three members of Labelle as well as Wyclef and Jerry Dupplesiss. Where are the names Marcus Miller and Mark Stephens? Seems to me when you rip them off for basically your entire song, you damn well give credit or risk charges of plagiarism (and a lawsuit). Miller and Stephens wrote Roberta Flack's hit "Oasis" and, if you've forgotten that minor eighties masterpiece, just give a listen to "Rollout" and you'll be singing "Oasis" all over again. This isn't a 'borrow,' this isn't a shout-out, it is out and out theft and no jury would hear it as anything else.

This track is the one that destroys the album for all three reasons noted. I heard the album at C.I.'s Halloween party and was ready to write a rave but I only heard parts of it. C.I. had programmed certain tracks for the guests and mingled them with tracks from other albums. Wisely, "Rollout" was avoided. The first time I heard it, I was bouncing along in the car seat with it but thinking, "Who are they ripping off?" Roberta Flack, that's who.

The standout track on this CD is "Superlover" which the group wrote with Camus Celli. For four minutes and fourteen seconds, you realize how great the group is (and that 'just backup' can add up to so much more). "System" isn't on that level but was worthy of recording and Nona wrote it years ago (when Carter was president) though it sounds surprisingly topical. "Truth Will Set You Free," by contrast, sounds like the worst of faceless-70s corporate rock. Why anyone thought there was a song in repeating a title over and over in front of an awkward beat that only the boys of Chicago would find 'funky' is beyond me. And that's what the real problem is. With just Nona and themselves as writers, they could have ended up with a solid and satisfying album. It might not have scaled new heights, but it would have satisified. Instead, on an album that makes very little time for two members of the group, they waste everyone's time bringing in second-rate hacks who have nothing to add. The extreme highs are: "Superlover," "Candlelight" and "Dear Rosa" in that order. "System" and "Miss Otis Regrets" minor gems.

Tracks like "Rollout" and "Truth Will Set You Free" aren't just bad, they're really bad. So bad, they sour the entire project. "Without You In My Life," for example, has trite lyrics (heard in top 40 songs for the last four decades) and a melody that echoes every hit James Ingram and Patti Austin ever recorded. But if it were the worst, it would just roll past you. Due to the extreme bad on the album, listeners are apt to be openly hostile and when they get done listening to the final track and realize that Sarah and Nona have been relegated to extras on their own alleged comeback album, Back to Now isn't worth purchasing.

That's a real shame because the three gems and two minor ones are strong enough to really let you know what could have been. You have to wonder how a 'reunion' album could have resulted in yet another Patti solo album? If you like Labelle, you can download those five track at iTunes and enjoy but you should avoid the CD. See them live, by all means. They're going to be touring and they will no doubt rock the house. If we're really lucky, they'll record the concerts for a live album. That's the reunion that the devoted (include me in that) want. Not hacks with 'names' butting into the process. Three strong women on the stage won't need any man intruding as they get down.