If there's a kinder way to put it, it's escaping me.

That can be her charm (such as when she finds a way to capture a moment in song that no one else could) or it can be her downfall (her infamous brawl at a Joni Mitchell concert last decade where she attacked fellow music stars). Mainly it accounts for how she could become the biggest pot head in the world. Some may attempt to argue that assertion and want hard data on exactly how much weed Chrissie's consumed on a daily basis. I think that's the wrong measurement. Back when Paul McCartney was spouting his 'pipes of peace' and getting busted in Japan, he still found time to regularly produce music. Chrissie? As she's said countless times, she's happy just lighting up a spiff and staring at the walls. What hard drugs did to Sly Stone, soft drugs appear to have done to Chrissie.

One of the greatest talents of the last three decades is also one of the most maddening and there's a tendency, when she surfaces musically, to treat her like a groundhog and avoid criticizing her because it might scare her back into her room for another four years. 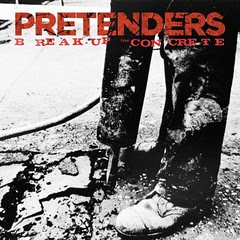 She's surfaced with eleven new tracks (ten of which she wrote) on a new CD entitled Break Up The Concrete and a band she's calling "Pretenders." The first clue that it's not Pretenders is probably the fact that the band's not listed until page 19 of the CD booklet. There's no one from the original Pretenders (granted two members o.d.ed long ago) and no one from any of her eighties groupings. At this point, a Pretenders CD is a bit like a Temptations concert -- if you'll accept an approximation of the sound and ignore all the new faces, you can lull yourself into self-delusion.

Let's start with the bad. Is there a more uneducated adult in the world currently writing for the masses? In the past, a lot of Chrissie's quirks could be excused by the fact that she was allegedly a "punk." Pretenders came along too late for the punk scene (which had already blossomed into "New Wave" in the US by the time the group was recording in England) but Chrissie did grasp hype. Her years of music journalism in England had at least taught her that.

If that seems cruel, so does Chrissie. Her uneducated mind is exposed and if anyone can excuse it, have at it. She's like some dottering bigot at this point and I expect few to muster a defense of her. Chrissie is infamous for urging bombings on McDonalds. 'Punk' Chrissie punked-out when McDonald's attorneys started talking to her and she quickly issued a 'clarification.' But she's supposedly our environmental warrior. So why the hell is she writing an ode to "Boots of Chinese Plastic"? Its one thing for her to wear leather -- to her that is rock and roll. Plastic boots? No excuse for it. Then there's the title track which is Chrissie's ignorance and nothing but.

On "Break Up The Concrete," she appears to want to weigh in on JFK's assassination. Why? Maybe someone just informed her he was shot? So she's making a ninny of herself writing and singing about the book "depot" and insisting it was built by "slaves" and JFK was killed because "Texans" refused to "ever get into a carriage or anything that might lead to an interracial marriage." Yes, she truly is that ignorant. The Rainman of Rock.

The "book depot" (Texas School Book Depository) was built in 1901. What "slaves," Chrissie? As for 'interracial marriage,' considering that it's not generally floated as a conspiracy theory and that Loving vs. Virginia (which legalizes interracial marriage throughout the US) is in 1967 -- while Johnson is president -- and that LBJ is actually the president who signs Civil Rights legislation into law and is never assassinated, it's a bit hard to go with Chrissie's stoner 'smarts.' Facts don't matter when the mind is baked and you want to prove how 'pro-Black' you are (and have everyone forget your multiple racist remarks in interviews well into 1983?). Facts especially don't matter when you're the type who makes the characters into This Is Spinal Tap look like geniuses.

"Boots of Chinese Plastic" and "Break Up The Concrete" are two of the three songs Chrissie most likely thinks are 'heavy' on this CD. The third is "Don't Cut Your Hair."

She must have really been toked when she wrote and recorded this little ditty. "Any guy is lying if he says he doesn't want it." She likes that line so much she repeats it. What does it mean? I think we're supposed to believe it means every guy wants some female tail and that's part of why Chrissie is so hopelessly out of date and the Pretenders did the fade they did. (No, not every guy is interested in women.) However, mere seconds later she wants to insist "all the guys are gay, it's the way today." Which is it? You're wasting your time if you're thinking there's some sort of logical, 'if . . . then' thread to Chrissie's purple haze. Both lines are insulting and she's too old (and punk has been dead for too long) to continue to get excuses. And probably by the time you're 'talent' is offering up such lyrical 'gems' as "shake it, bake it," you really don't deserve any more excuses.

All of this goes a long way towards explaining how Chrissie could applaud a man in her life who does nothing ("The Nothing Maker"). What Lennon and McCartney would have dubbed a "Nowhere Man," Chrissie's drooling over. Can I get some of what she's been smoking?

It's idiotic and it's also what she does best these days. Sing about love. When she sticks with love, it doesn't matter that she no longer has one coherent thought left in her mind. Building on her own body of work, she opens a song with "lover's of today . . ." ("Love's a Mystery") that's the sort of light-tempo song she can turn (churn?) out these days with little effort and maximum results. Don't pay attention to the words, just listen to that marvelous voice and grasp that she's whipped this new band into shape.

If you can sustain that limited expectations, you can be overjoyed by Break Up The Concrete. You can enjoy the fifties "Sea of Love" type "Don't Lose Faith In Me" (and never notice how little sense it makes), the aspiring to Miles Davis aspects of "Almost Perfect" . . . But only from a distance.

Get to close to the latter, for example, and prepare to immediately recoil. Of a woman "with two black eyes," Chrissie explains, "She's already been told twice." Again, there's no excuse for Chrissie's ignorance and there's no excuse for her offensive nature. Allowing that punk was one of the most racist and sexist musical movements -- it was, kiddies, that's why disco was its great enemy, a musical format featuring predominately African-Americans and females at that -- still doesn't allow for Chrissie the wanna be punk to be embarrassing herself over thirty years later.

If you pay attention to the album in full, you grasp that it's a revisionary history on race relations, a vocal expression and endorsement of homophobia and misogyny and that, basically, it's the soundtrack to Barack Obama's campaign -- all the various strands gathered in all their non-glory.

I think the music critics have been far too easy on Chrissie since slamming her hard on Packed! From 1980 to 1990, Pretenders (various line ups, always including Chrissie) released five album and the fifth, 1990's Packed!, was the first to really get a critical drumming. This album found Chrissie raiding the melodies and chord progressions of songs she'd written for the previous four albums. Eighteen years have passed since Chrissie was rightly called out and she's released only four albums, approximately half the output she offered while a critical darling. This adds into a belief by some critics that they must find a way to praise her because, as one friend who reviews for a monthly put it, "She's such an important talent." She's a half-baked genius. She's right about half the time and glaring wrong the other half. She, more than any other artist working today, proves Bob Dylan's "Trust the art, not the artist" commandment.

And she also proves that critics can't really baby the artists they review. If Chrissie hadn't been babied for so long, she wouldn't think she could get away with something as offensive as justifying domestic abuse or homophobia in 2008. She thinks she can get away with it in part because she lives in a non-stop pot haze but also because when rock's own groundhog briefly resurfaces, everyone kisses her ass. Don't think she doesn't grasp that or that the knowledge of that wasn't behind her televised 1995 mooning. And don't think continuing to blindly kiss her ass is doing her, her music or music criticism any favors.

pretenders
break up the concrete
chrisse hynde
kats korner
the common ills
Posted by Common Ills at 4:08 AM