Kat's Korner: Tori Amos, the friend you fear for

Kat: Some are calling Tori Amos' just dropped album a return and I have to wonder to what? When most people "return," they go to benchmarks which, for Tori, would include Scarlet's Walk, American Doll Posse, Under the Pink and Little Earthquakes.

Tori's 'returned,' people insist, and funny thing but, like a lot of people, I considered her last album a masterpiece. Maybe they mean that she's returned to a label? Tori was at Atlantic for years and then they trimmed their roster and, like WB years before with Carly Simon, gave her the face saving option of walking away as opposed to being "dropped" from the label. Tori took it and walked right over to Sony's Epic which did a wonderful job with Scarlet's Walk -- both in terms of promotion and packaging. Tori was less pleased with the results for The Bee Keeper. By American Doll Posse, Tori was ready to split.

She announced she'd be releasing her own albums and those words had a sense of freedom and power and the future appeared exciting.

She's signed what's being called a distribution deal with Universal and I have to wonder why? 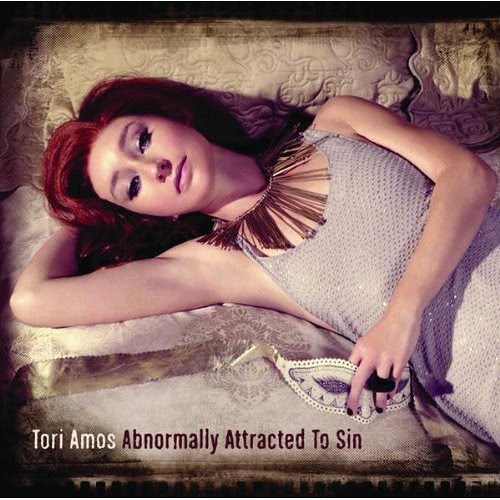 I listened to Abnormally Attracted to Sin on CD format before it was released. C.I. had an advanced copy. Otherwise, I would have just downloaded it (as I did, from Amazon, Tuesday morning). Why is Universal required?

I don't believe there's a single on this new album.

That's fine. I've admired many an artist who refused to chase down the singles. And a refusal to make singles doesn't mean you can't make art or music that many can love. But I thought art and music many could love was what Tori was going to be pursuing . . . releasing her own music. Distribution by Universal seems like Tori's begging for a tutorial in prolonged frustration.

"We love it! We love it!" she's told with the first album (as with Sony) and then, when she's recording the follow up, "We're not hearing anything commercial here." At which point, she's angry, they're angry and the break's coming.

In fact, the weak artists get ground down quickly (hello, Liz Phair) and the strong ones are either too frustrated to create their best work or else author a lacerating and angry work of art.

Maybe Tori has a "How Do You Sleep?" in her. I hope so because she'll probably need it shortly.
Some rush in to call this new release her "return to goth" -- as a radio station in Boston insisted. I guess they missed how Tori dismisses that label in "Police Me" (track nine on the new album)? This release isn't goth and Tori's never been goth.

She was alternative. With a lean and muscular sound. She returns to it from time to time ("Big Wheel" most recently). She took a side trip into electronica which almost killed her career. The decision to bundle a live (band) album with a disc of more electronica (To Venus And Back) saved her the steep drop U2 experienced at the end of the 90s. Electronica has yet to prove to be disco and everyone who thought they spotted a wave they could ride ended up grossly disappointed (include Madonna on that list).

And now? Is the album art?

It honestly is and it's strong art.

And if Tori had done what she swore she was going to as she walked away from Sony, I'd be thrilled to death.

But you don't listen to Tori for a few seconds and move on to something else. Her music is far too personal and far too involving. Listening to Abnormally Attracted To Sin is like watching a best friend, drunk on a little too much wine, confess to several affairs in the midst of a crowded party. On the one hand, you think if you could distance yourself, you'd admire the candor. On the other hand, it is your friend and all you can think is, "She's going to be groaning tomorrow."

And while the nature of Tori's art evokes a personal response, the critical reception demands it because she gets beat up over and over in the public square.

There's no one like her. This is an artist from the grunge wave. Find anyone, male or female, who can match her output. Who still has a career. All this time later.

She sang that ("Caught a Lite Sneeze") and it worked on so many levels as grunge was on the verge of imploding (having been corporatized) with one overly processed Kurt wanna-be after
the other stepping up to be (briefly) critically hailed as the next Rock God. There was only one Kurt Cobain, he was not going to be reborn, nor was he going to resurface with a bald head and the name Billy Corgan.

He was the Rock God of the 90s and towered over the other boys. But there were other talented men in different ways and, yes, there were talented women. There was indeed a Rock Goddess. She wasn't a counterpart, consort or an appendage, she ruled her own region of the grunge universe and her name wasn't Liz, Courtney, Kim, Julianna or Kelley; it was Tori.

So why is each release accompanied by a critical reception which can best be termed "bruised and bloodied." To her credit, she generally glides through all the carping unscathed. But you better believe if Evan Dando authored nine songs of filler and even one of Tori's in the last decade, his release would be hailed as a triumph.

What is the measurement because, for Tori, it appears to shift. "Oh, it's a great album? Well we'd agree but we're using US customary units. New album? Yeah, it'd be wonderful but we measure by metrics right now. Abnormally Attracted to Sin? It's just not making it on
when you break it down into Planck units."

By any measurement, "Strong Black Vine" is rock brilliance. It's got a Lez Zep groove that Alanis would give her eye teeth for and Jimmy Plant his left one.

At a time when the only muscle and mood left in rock seems to come from artists born outside of the United States, you'd think homegrown Tori would garner a little applause.


Signing with Universal (for distribution) means that discs of the new album will end up in various outlets and that can potentially widen her audience and lengthen her career. Personally, I think at this point, her tours do a better job of accomplishing both tasks and "blow them seeds away" ("Dyin' Today"). "Fire To Your Plain" is just about everything a Tori fan could want in one song. Again, I don't think there's a hit single on this collection. I also don't believe there's one track that won't thrill longterm fans.

Abnormally Attracted to Sin (title from a line in the musical Guys & Dolls) feels like Tori bringing her strongest art straight to her fans. And, were it not for the distribution deal, I'd argue that's what it was. Most of us will skip the middle man and just download the album but even having Universal in the mix leaves a bad taste. If Tori's career's proved anything, it's that no heroes ride in to help her, just a lot of smooth talking pimps who quickly reveal their sadistic streaks. Enjoy Abnormally Attracted to Sin for all the amazements it contains but prepare yourself for some emerging anger -- there's probably a "How Do You Sleep?" or "You're So Vain" in the near future.