Kat: "Can you hear that?" Joni Mitchell asks on Armchitka, a new live album of a 1970 concert given by her, Phil Ochs and James Taylor for Greenpeace. What most will hear is how important sequencing and track selection is. 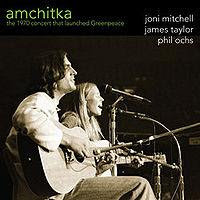 One of rock's true and unarguable classics is Joni's Blue and there are some who wrongly insist that with the title track, "A Case Of You," "River," "All I Want" and "My Old Man" on the album any other songs could be included for filler and the album would be just as powerful. While half an album of filler wouldn't have made Blue into Private Eyes or any other of Hall & Oates' substandard recordings, it wouldn't have made it Blue either. The inclusion of "The Hunter" would have turned Blue into a minor classic and that's if it had been the 11th track, forget if it it had been on the album instead of "All I Want" or "The Last Time I Saw Richard." The two tracks replaced "The Hunter" and "Urge For Going" at the last minute.

"The Hunter" is not a bad song, as Joni's live performance on the Armchitka album demonstrates; however, it is not up to the level of any of the ten tracks on Blue. She's singing of a stranger, a drifter presumably and a desirable one at that, a man she doesn't know who she lets sleep in a tool shed but not in the house.

It's not a bad song, in fact, it's the kind of song Leonard Cohen's been doing and redoing over and over for his entire career. The uptempo number could have fit easily on Ladies of the Canyon, but beginning with Blue, it's substandard Joni. Her leaps and artistic growth are so huge in 1971 and the years that follow that "The Hunter" never found a home on any of her albums. It's got a catchy beat but, for the standards she has been setting, that wasn't enough.

It works well on the live album which is two discs. The first is Phil Ochs and James Taylor performing their songs and the second disc is Joni performing her songs (plus Bob Dylan's "Mr. Tambourine Man" and the early rock & roll standard "Bony Maroney") and sometimes joined by then-boyfriend James Taylor.

Joni's charming and riveting throughout. On "For Free," following the first chorus, she starts the second verse before declaring, "Sometimes this song gets kind of hard to sing. Let me just putter around here a moment." She does just that, finding her way back to the chords and resumes singing. The audience responds warmly to that and other developments which had me thinking about Joni live. I've seen her live many times and it's Joni's publicly stated belief that the concert halls got too big. I remember the Rolling Thunder tour and she was more or less warmly received from the moment she stepped out on stage. Rolling Thunder was Dylan's How Much Money Can I Squeeze Out and the sound quality was hideous (I covered six of tour's concerts in print publications back in the day, just FYI) but Joni, and all the performers, were warmly received.

Joni's publicly stated belief is that the smaller clubs were a better setting for her and that's surely true compared to the disaster that was the Amnesty benefit of the late 80s in Denver. Joni was pelted by the audience with water bottles and cups and assorted other items (I believe the term she used was -- rightly -- "s**t" to refer to all of it collectively.) It was shocking to see because (a) she was in fact turning in a fabulous set (and I wish she'd stuck with the arrangement of "Number One" she performed which was far funkier than what later ended up on Chalk Mark In A Rainstorm), (b) if this allegedly enlightened audience would treat Joni like that, what would they do to others?

It was a truly shocking moment and a telling one that confirmed that the just-do-something 'activism' of the 80s (Buy a ticket! Buy a CD! You've changed the world!) was as shallow as it's supposed beliefs and actions. I don't care if Joe Montgomery, that you never heard of, showed up on stage and his voice cracked on every note, an Amnesty International audience shouldn't be booing. But it wasn't an Amnesty audience. It wasn't a rock audience either. It was a 'hipster' audience, people who wanted to see Tracy Chapman, Bruce Springsteen and whomever else they considered the flavor of the month. Joni's the only one I remember get things thrown at her but I do remember several other acts being loudly jeered and heckled. I also remember middle-aged men (miles and aisles of them) wearing that annoying 80s 'cologne' of pheromones -- which always smelled like dried cum to me. And they were all decked out in their shades and pushed up jacket sleeves, an army of Don Johnsons, while the women were heavily tarted up, trying to paint over the years, with the whole thing reeking of the cocaine fad that had long since passed.

Whenever I read an interview with Joni and she's complaining about the stadium audiences, I always fall back to that concert. "Can you hear that?" Joni asks beginning "Carey" which she quickly merges into the Dylan classic of 'play a song for me' with Taylor joining her for the latter.
In her spoken remarks between songs, she's joking with the audience and laughing and the apparent difference between the decade apart benefits is that Greenpeace was not a hidden aspect. With the Amnesty tour, as noted in real time, it appeared the organization was using Tracy, Bruce, et al as Pied Pipers to lure in an audience and that audience wasn't necessarily concerned with human rights but they could afford the over-priced tickets (I got in on a press pass). By contrast, as Irving Stowe explains to the audience at the start of the 1970 concert (and track one of the first disc), "By coming here tonight, you are making possible a trip for life and for peace. You are supporting, you are supporting the first Greenpeace project: Sending a ship to Amchitka to try to stop the testing of hydrogen bombs there or anywhere."

Phil Ochs pleases the audience as well. Months before, in April of 1970, he'd bombed spectacularly at Carnegie Hall and on the quickly canceled tour that followed. This was when the protest singer Phil was squeezed into a too-tight gold lame suit and claiming to be a hybrid of Elvis Presley and Che Guevara. In all published accounts of Phil's career, that begins a downslide that continues through 1971. Of course those accounts (including Marc Eliot's Death of a Rebel) don't mention the Greenpeace concert. Here's Phil in October of 1970, supposedly after his career is over, and someone forgot to inform the audience.

"Oh, but he was doing his audience favorites!"

He did do his standards like "I Ain't Marching Anymore," "Changes," "The Bells," "Rhythms of Revolution" and "I'm Gonna Say It Now" as well as the folk classic "Joe Hill." But he also did the then-new songs "Chords Of Fame" and "No More Songs" (from 1970's studio album entitled Greatest Hits -- it wasn't a greatest hits, all the songs on the new album were new ones). "No More Songs" actually has recognition applause when Phil begins playing it. "This is a song about the dangers of show business," Phil mumbles right before he starts singing "Chords Of Fame." The song's well received and it's actually a bridge for singer-songwriters.

Phil began as a protest singer and remained that on much of his Elektra work. When he switched over to A&M, he began writing more personal and less topical songs. "Chords Of Fame" is about the price paid for fame -- presumably paid by Phil. Dismissed by many as a form of naval gazing in real time, the song was just the sort of approach singer-songwriters of the seventies would take. Some, like the Eagles, would do so with a special style. Others would fare far less well.

James Taylor was Joni's boy toy when the concert was thrown. As arm candy goes, he was the sort you might find in your grandmother's purse but nothing you'd search out on your own. In fact, the first time he registered with me was when he landed on the cover of Time and I thought, "It's Roger Chillingworth" -- a portent and that only became clearer in the passing years.

That was 1971 and he'd already had his minor hit with "Fire & Rain," a song containing all the stiff-non-rhythmic qualities that would characterize his later work as well as the poor intonation and nasal qualities. On the negative side, you won't find any of Taylor's big hits among the seven tracks on the live album; however, that's due to the fact that he'd yet to enter his Pat Boone period when he began dominating the charts with soulless covers of R&B classics such as "Handy Man," "Up On The Roof" and "How Sweet It Is (To Be Loved By You)." Instead he offers two tracks from his 1968 debut (which would become a best seller in 1971), three from his Sweet Baby James album (1970) and two tracks that would be featured on his 1971 album. His performance has a freshness that should delight Taylor fans who will no doubt overlook the insincerity that is as much a hallmark of any Taylor recording as is the thin, nasal vocals.

Introducing "Sweet Baby James," Taylor notes, "It's a lullaby, it's half for him [his nephew] and half for me." I include that because C.I. was including a mention of this new album in an "Iraq snapshot" at the start of the month and noting James Taylor's vanity. As she dictated the snapshot, I stopped her and said, "'Sweet Baby James' was written about his nephew." C.I. gave me a look but pulled the section on that track from the snapshot. I had Amchitka for about two weeks before I finally got around to listening to Taylor's tracks. At which point, I was mortified because, yes, Taylor's vanity is so immense that as a young man he was writing lullabies to himself. At the time C.I. had said the song was as much a lullaby to Taylor himself but that if I wasn't aware of that then most people wouldn't be and "it's not going to be worth all the e-mails that will come in disputing it." So for those, like myself, who were not familiar with JT's self-sung songs, I'll note that here.

As I said, I skipped Taylor's tracks for two weeks. The first week, I just listened to disc two, the Joni disc. The second week, I started listening to some of Phil Ochs' tracks as well after I ripped Amchitka onto my laptop via Windows Media Player. But the set belongs to Joni.

Her performance of "Cactus Tree," for example, is superior to the version included on Miles of Aisles (1974) or Song To A Seagull (1968). "The Gallery" live sounds as wonderful as it does on Clouds (1969). But it all sounds wonderful. So much so that when Joni asks that question ("Can you hear that?"), you want to scream back, "Yes!" The sound quality is amazing and Greenpeace deserves huge praise for that as well as for unearthing this largely forgotten concert. Most of all, they deserve huge credit for having the foresight to invite Joni Mitchell, one of the few acts of that period to achieve legend status and to have pursued art so relentlessly that she's one of our modern masters. "We don't need no piece of paper from the city hall," she sings in "My Old Man"; however, any serious music lover needs Amchitka in their collection. Greenpeace is selling the two-disc album for a limited time only, click here, and they are also offering it (in full and in individual tracks) for download.