Kat: "Awakenings" sounds like it should be the tenth track on Sarah McLachlan's Remixed album. Instead, it's the opener of Laws of Illusion. And that's a bit confusing until the end of the song when the heavy touches fall away and she sings:

I'm not the girl I was
But what have I become?
I'm not so willing anymore to bend.
Still pleasing and conceding,
But I'm not going to lose myself again.

It's in those final moments that you begin to think Sarah Mac's got an album in her. 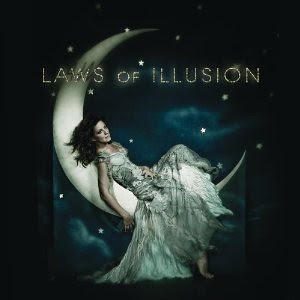 "Illusions of Bliss" cements that notion by being the best track on the album. Sarah's singing about the loss of resolve over a strumming guitar until piano and drums kick in at the forty-second mark. It's such a natural flow that you stop to ponder why it wasn't the first single and then you remember Sarah Mac's the last real artist with Arista -- and The Label That Clive Built long ago lost the ability to sell music (around the time they kicked Clive to the curb, in fact).

Is "Loving You Is Easy" a hit? It sure doesn't sound like one. But who gets hits these days? Pre-puberty kids?

What's really sad is that "Loving You Is Easy" really isn't what Laws of Illusions about. It's kind of like someone really loves "Sweet Surrender" and rushes off to purchase Surfacing only to find out that Sarah Mac didn't make a dance album. This go round, she didn't make an album of gentle love songs either.

And that's a good thing.

It's shocking to hear Sarah sing, "When you ask for forgiveness, You're asking too much" ("Forgiveness"). And that it's shocking goes to how agreeable and sunny Sarah Mac's been throughout her career. This is the woman who, after all, sang and wrote, "Your love is better than ice cream." This is the songwriter whose songs had tension and danger on the outside, far removed from the bedroom ("Hold On"). When she continues, "I have sheltered my heart, In a place you can't touch" -- and this is the chorus -- you should grasp a change has taken place.

In real life, Sarah has gone through a divorce. And the meaning of this is what the artist is trying to process. Along with "Forgiveness," "Heartbreak" and "Changes" probably best captures the loss. And in terms of rebuilding, the song "Out of Tune" continues the terrain and does so in a way that would make it the best shot at a single after "Illusions of Bliss."

When I told friends I was thinking about reviewing the new Sarah McLachlan album, the reactions were mixed. Maggie, for example, feared I would "hammer nails through her hands" while Toni feared there was nothing worth writing when it came to Sarah Mac.

And the range of feelings really reflect something that the label is not getting across, Sarah's maturing as an artist. I've seen her on CNN and one of the morning programs and she gets the point across in interviews. But somehow the label feels the maturation of a talent isn't a hook worth selling an album on.

If Sarah was indeed recording the same album many expected from her, I'd be half way done nailing her to the cross right about now. I'd note she was, as always, tuneful and I'd also be noting that we'd all heard everything she had to sing about around the time of The Freedom Sessions. Afterglow did nothing for me. "World On Fire" was pleasant enough on the radio but nothing I needed to purchase. It was all just too much "Calgon take me away!" and I really don't have the time for paperback romance novels and lengthy baths with scented candles and bath salts. I live in the real world and Sarah didn't do a lot of connecting with me.

I could hear "Full Of Grace" (Surfacing), for example, and think it was beautifully performed and produced but if a life was being reflected, it wasn't of anyone in my circle.

While not wishing divorce or a breakup on anyone, I will note that it's expanded Sarah Mac. She no longer sounds like she has all the answers. Had she continued down that path, she would have sounded as smug as Carole King ended up sounding on Love Makes The World. Instead, she's got a rawness and exposed quality that's never been present before.

Tell me
How do you feel?
It's so confusing.
You let it all go
It'll fall apart.
Do you want me to stay and say I still want you?
You want me to,
Don't you?

"U Want Me 2" is not a song you'd find on any previous Sarah album. If you did, if there was any confusion, it would be played as a joke, as that teasing moment at the initial stage of a courtship. Instead, here's a mature woman completely lost in . . . whatever this is.

And that's the power of Laws of Illusion. That haunted and haunting voice of Sarah Mac's finally has the soulful topics it's always needed.

If this were 1998 or 1999, some might worry that Sarah had gone too far for her audience. But it's over a decade later and, no doubt, many of her loyal listeners have lived through similar experiences over the years. In Sarah's latest album, they find someone who does understand what they've felt, who can express it, but who doesn't pretend to have any answers.

They find Sarah still hurting -- and Sarah in pain is the strongest she's ever been on any recording. This is a benchmark for Sarah as an artist, raising the stakes for everything that will follow. Its beauty's most likely a given considering her previous work but it's depth is completely unexpected. Here's hoping she works these tracks steady on the Lilith Fair tour because this is an amazing album that demands to be heard.

I downloaded the standard version from iTunes for $9.99. It comes with a ten-page digital booklet containing lyrics and photos. Best of the latter, is a red tinted photo of Sarah. You also get a piano version of "Love Come" which is better than the full arrangement version.