At McClatchy's Inside Iraq, an Iraqi correspondent remembers Yasser Slaihee, "In June 2005 there was supposed to be a sovereign government on June 30, Yasser's birthday, but Yasser didn't live long enough to see the date changed to June 28, they deprived Yasser from a wish that didn't come true even after his death, off course I blame no one for it doesn't matter, the ceremony and the announcement was everything but true on the ground." Yaseer was shot dead by a US sniper June 24, 2005. NPR's Jacki Lyden noted of the journalist, "Yasser was hip: blue eyes, wire rims and a buzz cut, average height, endless smile. He invited me for coffee to meet his wife and baby daughter, and our coffee klatch never ended. When NPR producer Tom Bullock turned ashen, feverish and couldn't get out of bed, Yasser hooked him up to an IV bag hoisted on a camera tripod before he even told Tom who he was." In real time, Ron Brynaert (at Why Are We Back In Iraq) blogged about Yasser's death and, in the excerpt below, he's citing a report by McClatchy's Tom Lasseter:

Once again, the Pentagon initially lied about the murder of a journalist in Iraq.

"An early report said Salihee was shot by a passing U.S. convoy when he failed to heed hand signals or shouts from soldiers. That later turned out to be untrue."

But there are conflicting accounts.

"Most of the witnesses told another Knight Ridder Iraqi special correspondent that no warning shots were fired. But the front right tire of Salihee's car, a white Daewoo Espero, was pierced by a bullet, presumably meant to stop him from advancing."


FYI, Ron's now with Raw Story. Yesterday's violence included assaults on Sahwa with four members of one family kidnapped in a home invasion and later found dead. Lourdes Garcia-Navarro (NPR's All Things Considered) reported yesterday that the month of June has seen a minimum of 19 Sahwa killed. Sahwa, also known as "Awakenings" and "Sons Of Iraq" are largely Sunni fighters that the US put on the payroll to stop them from attacking US military equipment and US service members, numbered over 91,000 and Nouri al-Maliki agreed to take them and fold them into government jobs, putting them on the Iraqi payroll. That really didn't happen. Targeting has happened, repeatedly. These are Iraqi citizens. Nouri has an obligation to protect them. His refusal to do so goes to the fact that he's not a leader. He can't protect the people and he has refused to call out the killings. Doing so wouldn't violate his attempts to continue sectarian tensions. Nouri's caught in the past and Iraq will never be able to move forward with him as prime minister. Back to Lourdes Garcia-Navarro who reports:

Now, the exit of American troops is under way. In 2009, the fate of the Sons of Iraq was left in the hands of Iraq's Shiite-dominated coalition government, which agreed to pay the men and eventually either integrate them into the armed forces or give them civilian jobs.
But scores have been arrested over the past year by the government, says Hussam, while others have fled the country, leaving a sense of bitterness among the remaining Sons of Iraq.

Since Iraq's March 7 elections, which failed to provide a clear winner, unrest has increased during a hot spring and summer in which temperatures have reached 120 degrees, and the tense atmosphere has been punctuated by political assassinations, riots over electricity shortages, bombings of banks and a campaign of killing members of the counterinsurgent Awakening Councils and their families.
Many of the recent attacks have occurred in Mosul, the capital of Nineveh Province.
Blame for much of the violence -- including the electricity riots -- has been placed on groups seeking to exploit the country's political deadlock by sowing greater discord.

That's a curious characterization. One that, no doubt, pleases Nouri, but one that seems to be have exceeded its grasp. The demonstrations, the protests, were peaceful until police and military showed up. That was true of Basra on Saturday (no police officers died -- they did shoot protestors and kill two however). And true Monday of Monday's Nasiriyah protest. (There were at least two minor protests on Sunday. They were not riots.) I don't see a riot in the Nasiriyah photos such as below. 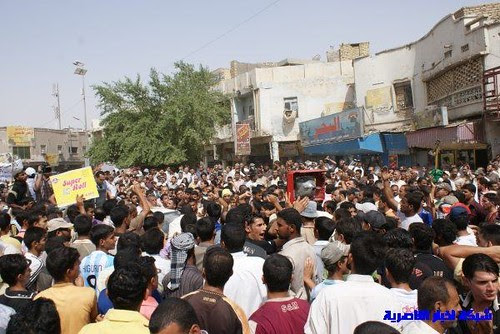 Again, when the police and military showed up things shifted a bit but the crowd can be seen as responding to intimidation and, even if you don't see that, it's still difficult to call what happened in Basra Saturday or Nasiriyah Monday a "riot." (And Monday saw one reported arrest -- of a police officer.)

The characterization isn't a minor issue. What took place, the protests, would not be characterized as "riots" if they took place in the US. And the only one who benefits from that terminology is Nouri al-Maliki. So it's a very strange characterization. This is probably a good time to again quote from Joel Brinkley's "Iraq reverting to its former freedom-less ways" (Sacramento Bee):


A large part of the problem is corruption. Under American stewardship, Iraq has grown to be one of the half-dozen most corrupt nations on earth. "Significant widespread corruption" afflicts "all levels of government," the State Department says. Nothing can so quickly cripple a democracy as the need by the nation's leaders to protect their cash flow and hide all evidence of their thefts. That leads, at least, to electoral fraud and press censorship. How can corrupt officials survive if the press is free to report on their misdeeds?
"We are controlled and censored," Faris Fadhil Sultan told me. He's a reporter for Al-Arabiya television in Iraq. "The government can exert its will on reporters through criminal charges or suspension from work - even kidnapping and killing."
Iraqi reporters are intimidated into compliance - even when Western journalists found that government officials had embezzled $13 billion in American reconstruction funds. That is a tactical problem for Iraqi democracy. A larger, strategic, problem lies in the certainty of history.

Iraqi's have been outraged by the electricity shortage which has left many areas in the country without electricity for much of the day amid temperatures reaching close to 50 degrees (120 Fahrenheit).
Hussain al-Shahristani, the current electricity minister spoke of the shortages and said that there was no 'magic wand' to stop the outages on Friday as Iraqi protesters massed in the capital Baghdad over the government’s inability to provide essential services in the war ridden country.

al-Shahristani is the acting minister and he goes on to state Iraqis should "limit" their use of AC. Maybe he can work on "limiting" the number of 100-degree-plus days. The average Iraqis may get a little more electricity. AFP reports that al-Shahristani has just "revoked electricity privileges enjoyed by government officials as he took temporary control of the power portfolio amid public fury over rationing" -- something you would assume would have been dealt with long ago. Something that never really should have happened to begin with -- directing additional energy to the Green Zone.


TV notes. On PBS' Washington Week, James Barnes (National Journal), Michael Duffy (Time magazine), Eamon Javers (CNBC) and Martha Raddatz (ABC News) join Gwen around the table. Gwen now has a weekly column at Washington Week and the current one is "General McChrystal and the Gift of 20/20 Hindsight." This week, Bonnie Erbe will sit down with Debra Carnahan, Eleanor Holmes Norton, Anne Manetas and Genevieve Wood on the latest broadcast of PBS' To The Contrary to discuss the week's events. And at the website each week, there's an extra just for the web from the previous week's show and this week's online bonus is a discussion about a new birth control pill which would prevent pregnancy for up to 5 days after intercourse. this week's online bonus is a discussion on the press' latest attempt to start Mommy Wars. Need To Know is PBS' new program covering current events. This week's hour long broadcast (Fridays on most PBS stations -- but check local listings) features Andrew Bacevich on the topic of the Afghanistan War and Hooman Majd on Iran. And turning to broadcast TV, Sunday CBS' 60 Minutes offers:

Blackwater 61
"Blackwater 61" is the call sign of a plane flown by the embattled government contractor Blackwater that crashed into a mountain in Afghanistan killing all onboard. The widow of one of the soldiers killed - a pilot herself - says the firm was negligent in the way it operated the flight. Steve Kroft reports. | Watch Video

Fighting For A Cure
More Americans are suffering from epilepsy than Parkinson's, cerebral palsy and multiple sclerosis combined. Katie Couric reports on a disease that may not be getting the attention it deserves. | Watch Video

E-mail issues quickly. Yesterday's snapshot notes a Senate Armed Services Committee hearing I wasn't present for and that I'd hope to go into it and might today using prepared statements (written statements for the record) and the input from friends present including a Congressional staffer. An e-mail asks about that and how often it happens? We've done it before I don't think it took place in 2009 but drop back to 2008 or 2007 and there should be some. When it does take place, I make it clear that I was not present (as I did yesterday) and that I'm relying on the statements and the observations of people present. If I am not present for the hearing, that's stated clearly. In 2006, we noted some Congressional hearings as favors -- some I wasn't present for -- on that basis and, when they were noted, it was made clear that I wasn't present. Related, but not asked in that e-mail, if I have to leave during a multi-panel hearing, I'm not covering a panel I didn't sit through. I also don't cover panels I sit through if I don't feel they're of value. That's generally the panels with government officials. I'm rarely interested in covering those because their testimony is always cleared ahead of time by their departments. Meaning, they are told what they can discuss and what they can't. Sometimes, we'll cover that fact because it does come up often -- usually when a member of Congress is frustrated with non-answers. But it's rare that the government witnesses are -- my opinion -- worth listening to.

Several community members -- and one visitor -- are noting an article and objecting to it. I share your objection. I believe 'pet issues' rendered that article worthless. Meaning that you don't bury peace or antiwar in a conference that deals with it. Meaning you have to be pretty stupid to mention antiwar and forget Iraq. But people have their 'pet issues' and those issues drive many, many people away. I would like to carry this over to Third because Elaine and I have spoken about this for weeks now and she's also repeatedly tried to pitch an idea at Third that would revolve around this issue. If it's not addressed at Third on Sunday, I'll tackle it here next week.

Stay out of the ocean
Stay out of the sun
Stay in perfect shape
And be number one
We've got brilliant excuses
For having no fun
So just blow out the candles
Happy Birthday
-- "Happy Birthday," written by Carly Simon, first appears on her Have You Seen Me Lately? album 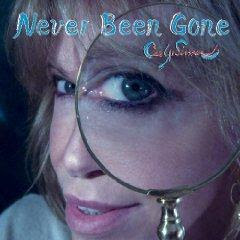 Today's Carly's birthday. Happy birthday to a legend in her own time and one of the country's finest songwriters. If you haven't already checked out Carly's latest, Never Been Gone, there's another reason to. Kat gave it a rave and she also picked it as the best album of 2009.