The fallen and the betrayed

Sgt David Luff Jr. died serving in Iraq on Sunday. WLWT reports on his hometown community's reaction to the loss and quotes John Praznski stating of the family, "There's probably no way to describe what they're feeling today -- there are no words. We just thought we should be here to be a part of it. People put yellow ribbons and American flags all through our community when Taylor died, and it's our chance to repay that. They're in shock; they need the community to lift them up in paryer. They need the community to be there to support them." And "Taylor" is John Prazynski's son Lance Cpl Taylor Prazynski who died May 9, 2005 while serving in Iraq.

Janice Morse (Cincinnati Enquirer) speaks with David Luff's sister Stacy Garrison who explains he texted her "telling her how badly he wanted to come home from his Army deploymnet to spend more time with his infant son" and that while December 31st will be David and Katie Luff's second wedding anniversary, they've been a couple since high school. Luff is also survived by both parents (Lucy and David Luff Sr.) and two brothers (Jeff and John Luff). William Cole (Honolulu Star-Advertiser) notes Luff was the "fifth Hawaii-based Stryker Brigade soldier [. . .] killed in Iraq on the unite's latest deployent, evidence that while violence is down, the war is far from over." 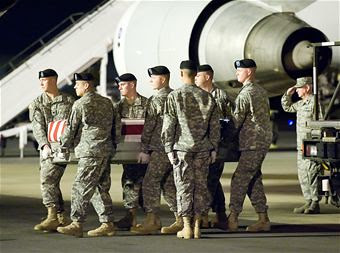 Fili Sagapolutele (Samoa News) speaks to father Larry Gandy who explains his son was on his second deployment to Iraq and that his survivors include a wife and four children. He tells Sagapolutele, "It is my son's wishes to be buried at Arlington National Cemetery. He is a very good son and we'll miss him a lot."

Tomorrow's Thanksgiving in the US. Some families have way more to deal with than anyone ever should. Rosie and Leroy Torres have to spend their time fighting for the care and treatment Leroy needs, the treatment Leroy's owed by the US government which was happy to deploy him to Iraq but has refused to grant him the treatment that he needs:

My husband, Captain Leroy Torres from Robstown, Texas serves a dual role to his
community as a State Trooper and as a Captain for the U.S. Army Reserve for 21 years.
In 2007 he was deployed for one year to Camp Anaconda in Balad, Iraq where the
largest burn pit is located. He initially became ill with upper respiratory infections and flu like symptoms during his tour at Camp Anaconda. Upon his return he was diagnosed with Bronchitis, upper respiratory infections, and "Iraqi Crud" by various healthcare facilities to include private sector, Department Of Defense (BAMC & Wilford Hall) and Department Of Veteran Affairs (Audie Murphy & CBOC). The VA and DOD’s negligence and refusal to provide the proper testing left Leroy with the VA stating his diagnosis of "unknown etiology with dyspnea." The DOD failed to deliver test results and follow-up care.
This year our Thanksgiving holiday will not be celebrated with our children, instead we will be spending our Thanksgiving on the road after seeking specialized medical care for illness resulting from exposures to environmental hazardous toxins and chemicals from the burn pit. Two years and over 25 medical visits later, both DOD and VA continue to deny a chemically induced connection between his service and illness.
In desperation we had to seek specialized medical care at our own expense from Dr. Miller and Dr. Lambright at Vanderbilt University Hospital in Tennessee. After an exhausting 24 months seeking answers in less than one week doctors at Vanderbilt were able to test and confirm a diagnosis of Constrictive Bronchiolitis due to toxic inhalation from the burn pit.
The emotional and financial expense to our family has been devastating. We have been forced to take FMLA. Our children have been ripped from our lives forcing us to relocate them with various family members across the state causing us to choose between our children and healthcare.
Sadly our story is not the first or the last, thousands of soldiers and their families that have selflessly served our country are battling the same war of accessing specialized healthcare for chemically induced illnesses from the burn pits in the battlefield.

The following community sites -- plus Military Families Speak Out -- updated last night and this morning:

by Joan Wile, author,
"Grandmothers Against the War: Getting Off Our Fannies and Standing Up for Peace" (Citadel Press '08)

Representatives of the National Gray Panthers went to Capitol Hill in November to present their position regarding Social Security. They spoke with members of the Deficit Commission and presented their counter proposals against anticipated recommendations by the Commission to cut Social Security benefits.


Susan Murany, Executive Director of the national Gray Panthers, told the Commission: "For 75 years, Social Security has remained a promise of economic protection and stability for the Americans who have paid into this program. As we now celebrate three-quarters of a century of accomplishments for this program, we must also do our part to ensure that Social Security is not weakened by those who wish to balance bailouts on the backs of Americans."

Social Security is America 's most successful anti-poverty program and remains the most fiscally responsible part of our federal budget. In fact, recent polls from the National Committee to Preserve Social Security and Medicare indicate that 85% of adult Americans are opposed to cuts to Social Security to decrease the deficit. However, while many Americans remain united on this issue, Social Security continues to face threats from increased polarization in Congress and those with anti-entitlement agendas.

The 2010 Social Security Trustees report shows that Social Security is not facing an immediate threat. The surplus within the Social Security trust fund is estimated to grow to $4.3 trillion by 2023 and remain able to pay benefits in full through 2037, and 76% of benefits thereafter. Yet, the opposition continues to project "doomsday" crisis reports and myths to the American public in their efforts to garner support for cuts to the Social Security program.

Proponents of these cuts, such as House Republican Leader Joe Boehner, would rather cut Social Security in order to pay for the war in Afghanistan . Outrageously, Boehner stated that, "Ensuring there's enough money to pay for the war will require reforming the country's entitlement system." Boehner also calls for increasing the Social Security eligibility age. However, a raise in the Social Security eligibility age would result in about a 20% benefit cut for recipients, hurting lower income beneficiaries working in manual labor and those with shorter life expectancy the most.

While it is evident that our government must make tough decisions to revive our down-turned economy, it is important to remember that cuts to Social Security would not only hurt seniors, but will also detrimentally affect people with disabilities, people who are unemployed, and women and children of deceased spouses/parents. Cuts to this program stand to unfairly burden the most vulnerable populations of Americans. While Former Senator Alan Simpson, the Co-chair of the National Commission on Fiscal Responsibility and Reform, declares that the “Gray Panthers [...] don’t care a whit about their grandchildren…", we adamantly refute his comment and we vow to continue working to ensure that Social Security remains there for them in their future.

Gray Panthers oppose any efforts to cut benefits! Instead of balancing the budget on the backs of Social Security recipients, especially those most dependent on its benefits, here are some of the proposals we support:

- Eliminate the annual cap on taxable income and raise that cap so that wealthier people are paying more to Social Security. Under current law, wages over a certain yearly total ($106,800 in 2010) are exempted from Social Security payroll taxes. This means that a worker earning $106,800 a year pays the same amount of FICA taxes as a CEO who makes millions of dollars a year.


- Let the Bush tax cuts for the wealthy expire. The revenues gained from these expirations are far more than enough to fill current state budget deficits for the next ten years while still leaving an additional $2.76 trillion dollars left over to promote further economic recovery. There is no place for tax cuts in a deficit reduction proposal as were suggested by the Chairmen of the Deficit committee last week!


- End the wars. Funds saved from Social Security should not be used to pay for wars; rather, we should cut funds for wars to finance Social Security. The Gray Panthers support the Chairmen’s proposed cuts to Defense spending, but more cuts can and should be made!


- Extend outreach and enrollment. Gray Panthers believes that not only should Social Security be kept intact, but that outreach should be increased and enrollment expanded to get a greater number of older adults in poverty into the program.

The retirement age increase [proposed by the Commission is just a particularly cruel way of cutting benefits. The age at which the elderly can retire on full Social Security benefits is already increasing to 67 by 2027. The chairmen’s plan would “index” the retirement age to increase in longevity, meaning it would hit 68 in about 2050 and 69 in about 2075.

New York Times opinion columnist Paul Krugman has pointed out, http://krugman.blogs.nytimes.com/2010/11/10/unserious-people-2/, that “the people who really depend on Social Security, those in the bottom half of the distribution, aren’t living much longer. So you’re going to tell janitors to work until they’re 70 because lawyers are living longer than ever."

Is this how a humane society proposes to care for its less fortunate? Not if the Gray Panthers have anything to say about it!