Kat's Korner: Cher demonstrates this is far from over 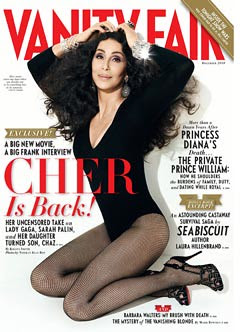 Kat: Cher's smiling from the cover of the current issue of Vanity Fair and you'd be hard pressed to name ten other music performers who were charting in 1965 who could make the cover today without being charged with a crime or suffering from an illness. Krista Smith's cover story notes:

Through the ups and the downs, Cher has endured. And the 90s demonstrated that better than any other decade. Cher ended the 80s riding high in music and film. In a few short years, she'd pretty much disappear from the music charts and the big screen.

"Just Like Jesse James" and "Heart of Stone" from 1989's Heart of Stone would continue her chart run as would "The Shoop Shoop Song (It's In His Kiss)" from the Mermaids soundtrack (which also continued her big screen run). But how quickly things change.

Cher's biggest strength can also be her biggest liability: She does what she wants.

Having finally established herself in the world of rock, she released Love Hurts in 1991. It wasn't a radical departure from her previous work and one of the biggest complaints was the sameness of the project when compared to her previous two Geffen albums. Sameness doesn't have to hurt you at the charts. And it's not what made Love Hurts -- a huge hit everywhere but in the US -- such a poor seller.

The album wasn't even out and it was a problem, there was a Cher problem. I was at a party and a hefty guy was pontificating on how "fake" and "plastic" Cher was and pointing to her new red wig as proof. Rock and roll, as most girls and women understand, is all about dress up. But there are lines drawn all the time and if you're someone who has just fought a hard won battle, you find that for every line you broke, three more got drawn in. Probably six if you're a woman.

The title track went top twenty while the follow up (the superior "Save Up All Your Tears") barely cracked the top forty and would remain Cher's last US top forty (Hot 100) hit for years and years.

There are a million and nine reasons offered for this but it really does just come down to the wig. Cher's spoken of the debilitating effect of Epstein Barr during this period and has noted she did a hair infomercial for her friend Lori Davis which got her slammed. And that's certainly true and it effected her screen career. However, I argue it's the wigs that effected her run on the music charts.

A successful woman breeds a certain kind of hate in some. I saw it at the party as the hefty man was trashing Cher, stating outright that she was inauthentic and offering the subtext that only gay men listen to her and that there is something wrong with gay men. It's the same homophobia that Lynn Crosbie tried to push earlier this week.

Cher does have fans who are gay and always has had them. She's also has fans who are straight, who are this race or that race or this or that ethnicity. She's a global phenomenon and her audience is huge as her sold-out tours demonstrate.

This homophobic line of attack is used on female artists very often -- most notably on Diana Ross and Barbra Streisand -- but it's rarely applied to male artists which always leads me to wonder, "Do these people really think the Rolling Stones' audience is 100% straight? Do they really not know what 'When The Whip Comes Down' is about?"

The basic premise of the homophobic attack is that gay people aren't real people, they're artificial and they respond to artifice and, therefore, the music they enjoy isn't real music, isn't real art.

And, as I pointed out, that homophobic attack is forever aimed at the women. Though Bon Jovi has a large following among gay men, no one frets that their move towards country is 'artifice' or accuses them of being fake. Apparently, there's nothing more genuine than a bunch of New Jersey cowpokes.

Grasping that successful women will be attacked as fake and artificial -- which, as with the use of homophobia, is an attempt to say that the people involved are mutated or deformed, you can better understand my wig theory.

But let's jump ahead to 1998 when Cher released what would become the biggest charting hit of her career, "Believe." The song topped the charts around the world but there was resistance to it in the US and only after Cher performed it on the America Music Awards did radio stations in this country begin adding it to their playlists. Once added, they found out what everyone else already had: There was no escaping the song.

And it was the kind of monster hit that should guarantee the next album at least gets a listen but when Cher followed it up with 2001's Living Proof, that wasn't the case. She'd notch up three number ones on the dance chart, she'd debut at number nine on Billboard's Top 200 Albums chart, but pop radio didn't want to know from her.

Cher had gone from survivor ("Believe") to persona non grata in record time and, check out the Living Proof album cover and the videos, the only real change she'd made was wearing a blond wig.

Cher does what she wants and pays the costs. She does it without whining or carping. She's the ultimate rock and roller. As she sings in her just released single from the Burlesque soundtrack:

And it's the story of Cher's career.

It's why she's had hits in every decade. It's also why a gem like 1995's It's A Man's World (featuring some of her most gorgeous vocals) get ignored. It's why she had to release 2000's not.com.mercial herself, truly one of her greatest albums. Those are the two albums of the last two decades to check out if you're a Cher fan. After that, try to get a hold of Cher's only live album so far, Live! The Farewell Tour which suffers only from not including the song Cher made her own during her late 80s and early 90s tours: "I'm No Angel."

The career's had highs and lows but it's been done her way. She's more successful than any of her 60s peers or 70s peers or . . . And that's true by the standard of ticket sales -- she set the record for women on tour with her Farewell Tour -- or by the standards of chart hits for singles or albums, or chart runs or what have you.

But in the end, when I say she's more successful than any of her peers, I'm referring to that fact that she does things her way. The lows and the highs, she owns them all. She makes smart decisions, she makes dumb decisions -- and she owns them all. It's why some people have a few hits but she's got a career. It's why some people sample fleeting fame but she's a legend.

And that is why it's so appalling that she's not in the Rock & Roll Hall of Fame. This year, Dr. John is nominated as a performer and Cher's not. Dr. John. As a performer. As a rock and roll performer. Dr. John.

In the Vanity Fair article, Cher states, "Sonny and I still aren't in the [Rock and Roll] Hall of Fame, and it just seems kind of rude, because we were a huge part of a certain kind of music, and we lasted for a very long time. . . . I have so much of everything that I want that those things don't usually bother me. It bothers me a little bit more because Sonny was a good writer, and we started something that no one else was doing. We were weird hippies before there was a name for it, when the Beatles were wearing sweet little haircuts and round-collared suits. The Rolling Stones were the only ones who understood us. People hated us here; we had to go to Europe to become famous. We influenced a generation, and it's like: What more do you want?"

Exactly. Over 70 men are in the Hall as solo performers, women barely register. I'm championing Cher [here for part one, here for part two and here for part three] and trying to draw a spotlight on her absence in the Hall but there are many deserving women who are not in it. Each year the list comes out and it's heavily dominated by men and your music critics -- including 'friends' like Ann Powers -- look the other way and ignore the imbalance. There have not been any years in which a man wasn't inducted into the Hall but there have been years where no woman or only one woman was inducted.

And we're not supposed to notice that?


As Cher sings in her latest single, in her 74th solo single, "This is far from over."