Kat's Korner: The vision and authenticity of Stevie Nicks

Kat: "Come on it's time to go upstairs," Stevie Nicks sings, as "Secret Love" kicks off her latest studio album In Your Dreams. More than a few have noted that the track is a song Stevie wrote in the seventies and declared that in a sort of self-satisfactory manner suggesting, "That's why it's so great." Actually, no. Lyrics like "I am not asking forever from you, I'm just asking to be held for awhile" do hit you at the core. But that's due to much more than the lyrics and the melody, it's due to the production and the sureness, the confidence, the brava with which Stevie sings -- no, not "sings," lives -- with which Stevie lives the song. 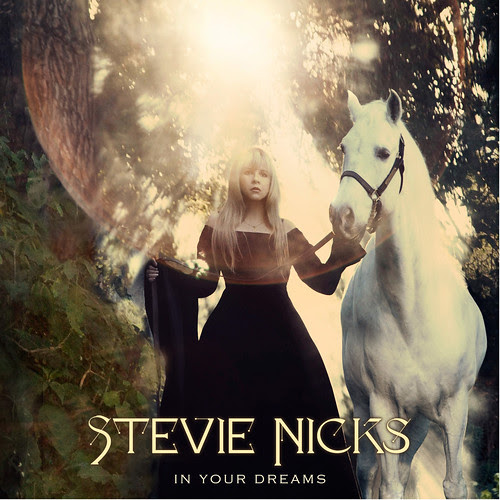 As a rock lover of many, many years, I long ago accepted that you can describe certain things, you can explain them until your blue in the face, but you'll never really manage to share them. For example, talking Nirvana today with someone who has just discovered the group can make for a wonderful conversation but you will never successfully convey to the new listener what it was like in the fall of 1991 when Nevermind hit the stores and, more slowly, the airwaves. You can talk about how dead radio seemed in the lead up, how tired and uninspired, and how this great gust of fresh air came bursting through; however, if you weren't there.

You can explain, for example, that it was a year -- the final year, in fact -- when music labels pinned big hopes on new releases by Rick Astley and Vanilla Ice (so much confidence in 'Nilla that they shoved two new releases off on the public in 1991). You can state that the only bits of life in the otherwise dead and droopy music scene that year seemed to come from the then-Marky Mark showing up onstage or on MTV in his briefs to pump that crotch to "Good Vibrations." But if you didn't live through it . . .

Similarly, I can write about Stevie Nicks and Ann and Nancy Wilson's Heart and what the three women meant and accomplished in the seventies and the eighties and the ground they broke and the way they rocked, but if it's a story imparted and not a memory recalled, there's never going to be the same level of shared joy or excitement. I can write pages and pages about how Stevie made lace, piano shawls and air waves the must-have craze for so many women but I won't get the point across because there's no point of reference of, if there is, it's Madonna and what she inspired (briefly) was a legion of copycats who wanted to be her while Stevie inspired women to want to be themselves.

What I couldn't get across in a forty-two page essay, In Your Dreams does in 13 songs.

It's not a 'good' album or a 'nice' album, it's a living, breathing testament to the art of Stevie Nicks. It remains you of how great music can be and it shows just why the hell Stevie Nicks ever mattered in the first place.

No one else, for example, could have written or convincingly performed "Moonlight (A Vampire's Dream)." The whole album is Stevie at her strongest which is Stevie at her most open and her most vulnerable. There's no barrier, there's no filter. To listen is to mainline.

Strand of golden hair
Tangled
Like the words of a song
Like the spider's web
Then he said
Everybody loves you
But you're so alone
Everybody knows your name
But you can't find your way home
No one really knows you
I'm the only one
-- "Everybody Loves You," written by Stevie Nicks and Dave Stewart

Dave Stewart co-writes seven of the tracks with Stevie and, along with Glen Ballard, produces this amazing album where everything sounds right, where everything looks right including the glorious cover photograph, taken by Kristin Burns.


Excepting "Talk To me," "Too Far From Texas," "Stop Dragging My Heart Around" and "Seven Wonders," Stevie wrote or co-wrote all the above. (She wrote additional lyrics to Sandy Stewart's "Seven Wonders.") Among the songwriters who've made an impact on Stevie is Joni Mitchell and she often cites Joni's Ladies of the Canyon as one of her favorite albums. That may strike some as strange since Blue is considered Joni's all time finest work. But Blue is about a woman alone, breaking up and healing alone. As close to the bone as the pain, love and hurt are on Blue, that's how far away the rest of the world is. Stevie's music, Stevie's lived life is Ladies of the Canyon. It's the friends gathered round with song and in song, it's the magical getaway where, yes, they may have paved paradise, but there's the hope that we can get back to the garden and, always, good music played real good for free.

An artist is supposed to have a vision. Few artists in modern music can match Stevie Nicks who has created a world in song that is populated with all she believes in. And while In Your Dreams can allow even a first-time listener to marvel over the greatness and power at Stevie in full bloom, it's too late in the music world for them to truly appreciate Stevie as a songwriter.

This Is Spinal Tap is a hilarious film. (My favorite scene? When Fran Drescher's explaining that the album cover is a no go.) But though released in 1984, it says a great deal about the seventies rock scene which really wasn't all that welcoming to women. When the peace and love and dreams of the sixties were stripped away due to 'realism,' what was often left for females was the role of groupie or, worse, 'piece.' Jimi and Jim both burned out and that was something to rejoice in and emulate. Janis, by contrast, was used as a morality play, a cautionary tale. And while a rock god of the day like Jimmy Page might publicly praise Joni throughout the 1972 US tour for Led Zeppelin IV, rock radio was already pushing Joni to the side.

It was into this often hostile to women environment that Stevie, Ann and Nancy entered. And the three women could have made it all about themselves easily -- narcissism being the most common thread and trait in rock music. The Wilson sisters carved out their spot in 1975 with "Crazy On You" and, the same year, Stevie did likewise with "the tale of a Welsh Witch" (as she notes on Fleetwood Mac Live) "Rhiannon." And they could have then made it all about themselves. 'Hey, fellas, look at me! I'm the only girl in the room and I want it that way!' Instead, they used their spots on the dance floor to waive over the women on the edges. I don't think this was planned, I think it's just the way the three women are. If it's a party, they wanted to party and, to them, it just made sense that everyone else was invited too. And onstage and in song, they expanded the rock world by expanding the understanding and portrayal of women.

In the world Stevie's envisioned in song, the ultimate dream, life is something you get dressed up for in the prefect outfit, go with your date to a party with all your friends and the most extraordinary music. That vision of community is probably most on display on the new album in "New Orleans" where she sings, "I want to get a room in New Orleans, I want to sing in the streets of the French Quarter, I want to dress up, I want to wear beads . . ." And when Stevie emerged, nihilism was a major chord (and would soon become the dominant one). The only contrast was those out-of-touch, up-with-people songs that insisted the world was a Walt Disney animated film. Stevie walked through the darkness and broke through the plastic to display the world she wanted to live in, the world she cherished.

It's the world of her songs and not just in lyrics. One of her early influences was the Mamas & the Papas and her love of the way voices can harmonize and combine led to the creation of her own unique sound. Sharon Celani and Lori Perry-Nicks? It's difficult to imagine a Stevie album without them and these three women I like to think of as "The Wild Hearts" are again together on this album. The three harmonizing provide so much throughout the album but especially on "Annabel Lee" which is Stevie setting Edgar Allen Poe's classic to music. A daunting task, to be sure. But one she pulls off and, in part, because of the amazing vocal work the three do making the song such a treat to listen to.

This is a gorgeous album and one so good it's now replaced PJ Harvey's amazing Let England Rock as the album to surpass. This is the benchmark and while I expected to enjoy and, yes, love Stevie's latest, I was still not prepared for how great this album was. Repeat listenings and it still blows me away.

Some have wrongly assumed that the excitement is due solely to "Secret Love" and that the buzz on that song is due to the fact that it's from the seventies. A guy who hadn't even heard "Secret Love" (let alone In Your Dreams) was telling me last week that, sure, she had a leftover song from the seventies and could pull the rabbit out of the hat once. A leftover song?

Do people not grasp that Stevie's solo career is due to her songs? That writing so much more than could ever fit on a Fleetwood Mac album is what led to Bella Donna in 1981 -- and that "After The Glitter Fades" on that album was written before she ever joined Fleetwood Mac? If all she had to offer was her unrecorded songs written in the seventies, she probably has enough from that period alone to fill ten or eleven albums. But, as "Soldier's Angels" demonstrates on the new album, her songwriting gifts remain intact.

And why In Your Dreams succeeds so well is because Stevie and her producers have created a Stevie album. There aren't efforts to figure out how to make her sound like Stevie via Katy Perry or attempts to turn it into Stevie Nicks & The Black Eyed Peas. It's Stevie being Stevie and everyone in the studio was smart enough to provide needed accents while avoiding to trying to transform her into someone else. One word for In Your Dreams? Authentic.