Today Baghdad was slammed by bombings. AP reports three bombs went off in a downtown market. Citing morgue sources, Reuters counts 10 dead with reports of twenty-six injured. Sky News (link has text and video) offers that a large black plume of smoke hung in the sky over Baghdad. Raheem Salman (Los Angeles Times) quotes survivor Saleh Mahmoud stating, "I was there when I heard explosions. Then a huge fire and black smoke came out. … We realized that it is Kinani building, which had a fire last year."

Last Sunday, the number of US military people killed in the Iraq War since the start of the illegal war was 4485. Tonight? PDF format warning, DoD lists the the number of Americans killed serving in Iraq at 4485. 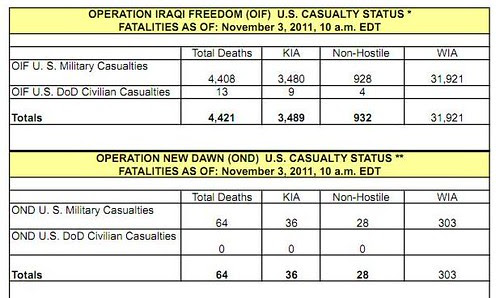 The count hasn't been updated since Thursday. When it's updated next (most likely tomorrow at ten a.m.), it will have increased by one. In other reported violence, Reuters notes that a 5-year -old (Turkcman) was kidnapped in Kirkuk and that a Mosul roadside bombing claimed the life of 1 Iraqi soldier.

Al Sabaah reports that Nouri thinks he can alter the Constitution via his Council of Ministers. At question is Article 119 of the Constitution which covers how a province can become independent. The Council has written their own new bill and intend to force Parliament to vote on it. Another power grab by Nouri. Al Mada notes that the country is in the midst of a political crisis with no end in sight. This is Political Stalemate II. Nouri's refusal to abide by the outcome of the election and surrender the post of prime minister caused Political Stalemate I which only ended (November 2010) when the political blocs met up in Erbil and ironed out an agreement where everyone made concessions. This agreement is known as the Erbil Agreement. Upon all parties signing off, Parliament held their first real session in over eight months and Nouri was named prime minister-designate (Jalal Talabani would wait over a week to name him that 'officially' in order to give Nouri more time to put together a Cabinet.) Upon getting what he wanted, Nouri went on to trash the agreement. This is the start of Political Stalemate II which has continued since. The National Alliance, Iraqiya and the Kurdish politicians (except for Goran) have called for a return to the Erbil Agreement.

Sam Dagher (Wall St. Journal) reports on the continued stalemate and notes Nouri is firing people from the security and targeting people with arrests and "At the same time, Mr. Maliki is delaying appointments to top posts that oversee the security forces, now almost one-million strong including the army and police. Mr. Maliki continues to run the ministries of defense, interior and national security himself or through party and sectarian allies, contravening an agreement with Sunni-dominated and Kurdish political blocs that formed the current coalition government more than 10 months ago."

Al Sabaah quotes an MP (unnamed) with State of Law insisting that the security ministries are working on a plan for the country and that they will need US military help with intelligence efforts as well as for logistical support and that the purchase of weapons will also mean the need for training and maintenance via US troops. Nouri and Barack meet face-to-face in DC next month. Aswat al-Iraq reports:

Al-Alawi pointed out to Aswat al-Iraq that "there are pending dossiers, such as the present political crisis, the security situation following the withdrawal, immunity to trainers, latest developments on regions' questions", but he added that "the visit should come out with something new".
The White House announced that Premier Maliki will visit Washington on 12 December next upon an invitation by President Barrack Obama.
He elaborated that both sides will "reconsider the situation if the armed group found a way after US withdrawal".


Isaiah's latest goes up after this. The e-mail address for this site is common_ills@yahoo.com.