Iraq War veteran Leroy Torres and his wife Rose Torres work on the Burn Pit issue non-stop. Another person who does is Iraq War veteran and Afghanistan War veteran Daniel Meyer whose blog can be found here. This month the three of them and others have been working on lobbying for a Burn Pit Registry. Wednesday, Daniel Meyer reported:


Yes­ter­day, Novem­ber 8, 2011, BurnPits360 stormed capi­tol hill, kick­ing off a three day cam­paign. The sec­ond week in a row being in our nations capi­tol, this event dis­plays the ded­i­ca­tion and tenac­ity this great orga­ni­za­tion exudes in sup­port of vet­er­ans who have been neg­a­tively affected by toxic burn pits. It also comes just a few short days after the intro­duc­tion of the Open Air Burn Pits Reg­istry Act of 2011 by Con­gress­man Todd Akin -- R -- Missouri.


The burn pit issue is one that there should be strong support from Congress on. But there really hasn't been. When some -- Evan Bayh, for example -- have attempted to lead on the issue, others have refused to allow a bill out of committee. In fact, a hearing I attended today found the same man who serves on the Senate Veterans Affairs Committee and blocked Bayh's bill attempting to block, on the Senate Armed Services Committee, the National Guard from garnering a Joint Chiefs of Staff position. While that goes on and his time in the Senate tick-tick-ticks down, more people come out in favor of a Burn Pit Registry.


Baca was the first veteran from New Mexico to publicly say burn pits were killing soldiers. He stood with the state's two U.S. senators last week after they introduced legislation to create a registry that would track veterans who were exposed to open burning and help them get medical treatment. America's military created the burn pits as a practical means to keep bases in Iraq and Afghanistan functional.
"They burn constantly to get rid of trash, metal, batteries, chemicals, human waste, plastics, paint. Contaminated jet fuel is used for the fire," Baca said one recent afternoon.

As awareness increases, we see efforts to minimize the realities of Burn Pits. Last week, the Institute of Medicine published a silly study researched by several people who depend upon government funding to finance their other studies. Even then, they couldn't come out and say there was no link between burn pits and serious damage to respiratory systems, forms of cancer, etc. The most they could offer was that further study was needed because they couldn't prove or disprove. J. Malcolm Garcia (The Investigative Fund) published a brilliant take-down of that 'study' today and he also noted:

Last year, long before the IOM report, the US government acknowledged the injurious effects of burn pits. According to a report released last year (PDF) by the United States Government Accountability Office, "burn pits help base commanders manage waste, but also produce smoke and harmful emissions that military and other health professionals believe may result in acute and chronic health effects to those exposed."

So while further study may elicit more information about the effects of breathing burn pit fumes as well as the dust in Afghanistan and Iraq, the verdict appears to be in, and that is that the government knows that just breathing the air poses severe consequences to its soldiers.

It took decades for the Congress to get behind an Agent Orange Registry. In 2009, then-US Senator Evan Bayh attempted to get the ball rolling on Burn Pit Registry but some people really weren't worried about veterans. They give pretty speeches and they'll vote to create programs that aren't needed, but that's all they'll do. Excuse me, they will also savage Secretary of Veterans Affairs Eric Shinseki for attempting to increase the number of Vietnam veterans helped. It's funny, whenever you're talking money that's not about 'small business' -- even if it's a small amount -- certin 'friends' of veterans immediately lodge complaints and work overtime to bury proposed legislation that might help.

Again, the clock is tick-tick-ticking down for that US senator who will be gone in January 2013. And veterans will probably be a lot better off as a result.

Last Thursday, ICCC's number of US troops killed in Iraq since the start of the illegal war was 4485. Tonight it remains [PDF format warning] 4485. Here's the screen snap: 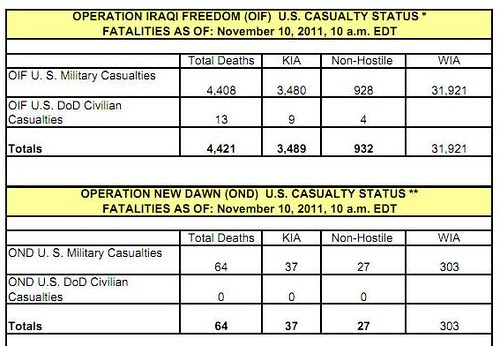 
iraq
i hate the war
the ballet
Posted by Common Ills at 10:38 PM