So what did we learn this week from the Senate Armed Services Committee hearing on Tuesday?

A great deal about the press.

Including that they are lazy (there were exceptions, we noted them), that they'd rather all be wrong together than be right all by themselves (again, we noted exceptions) and just how stupid they can be -- All Things Media Big and Small.

Here's the first thing to jot down: Most 'covering' hearings don't know what was said.

What they do is they use prepared remarks. Witnesses provide prepared testimony in writing -- their opening statements (which bad witnesses read word for word aloud) -- and these are embargoed until the hearing but available. The press can get access to them before the hearing starts but the embargo means: "Please, please, don't publish on this until after the hearing starts." The Chair and the Ranking Member usually have their opening statements written out ahead of time and their staff freely distributes them.

With that, most of the 'reporting' you read is done.

What was the big story about the Tuesday hearing?

That John McCain and Leon Panetta had sharp words.

That was the first round of questioning and that was passed off as news because it was gossip. That's what the DC press corps runs on. But anyone really present for the first panel would have been aware that McCain and Panetta had no personal problem and were laughing with one another and thanking one another in the second round. That didn't get slipped into the story because most 'reporters' weren't aware it happened.

Just like they didn't know what was said about Camp Ashraf residents or what was said about drones or that the Chair of the Joint-Chiefs referred to US bases in Iraq that will be used by the US next year as "enduring" bases. His term. He emphasized it and noted it. But the press didn't tell you that.

See, you can write a full story, you can tease it out and pretend like you were there covering the hearing just by a quote from this opening statement of the Chair and that opening statement of a witness and toss in the gossip of the hour and -- BOOM! -- instant story for hearing you don't even know what they discussed.

But I've never cast him as a peace-nik. Nor as someone that antiwar types should be applauding. Why would I? Though the press glommed on "Barack's women" with the Libyan War -- Leon was right in there screaming for it as well. He was at odds with Robert Gates. Gates is a Hawk -- so is Leon.

So it's really funny to reflect on the garbage Antiwar.com churned out which paints Leon as the great defender of peace and national soveriengty.

They read the bad reporting presumably.

But they weren't at the hearing so they were unaware that the 'answer' Leon gave wasn't thought up on the spot. Leon came into the hearing with a series of possible remarks to use.

So when John McCain (first round) was hitting on what he saw as the administration's failure to close the deal with Iraq despite the fact that the Iraqi politicians wanted it and were asking McCain and other senators why the White House wouldn't present a plan -- not in May, not in July, never. As the clock ticked down, no plan. To that, Leon pipes up, looking down at his sheet of prepared responses, that Iraq's an independent country.

So now Anitwar.com feels they can 'report' on hearings without knowing what was said or what the exchange was? Great.

Just as lazy as every other outlet, in case you didn't notice.

I don't get it. I don't get why a variety of outlets didn't have press present for that hearing on the status of US and Iraqi relations.

The Progressive, The Nation, Democracy Now!, et al weren't going to be there because they just whore for Barack. We got that in 2008 when they could and did offer that Ralph shouldn't run and they ignored Cynthia McKinney's run and they lied about Barack while treating Sarah Palin as if she were running for president. Even Dan Quayle didn't get that treatment.

They exist to whore and to treat you as cattle that they control and herd. That's why they get the money they get. And that's why they have no real independence.

No, they weren't going to be at the hearing because they're not planning on telling their audiences the truth about the Iraq War and occupation (which continues, check out the hearing, it's not over).

But Antiwar.com? They weren't going to send someone to the hearing?

And then they 'cover' the hearing with this awful article which ignores all the big events of the hearing -- the ongoing negotiations; the expectation that, as 2012 starts, a deal will be struck between the two governments for trainers; that the US will maintain ten bases; that these bases will have US troops under the DoD umbrella (no, all US troops in Iraq will not be under the State Dept banner as we've been told), the staging platforms outside of Iraq, and so much more.

None of that made it up in the 'report' Antiwar.com did.

But Leon Panetta was presented as somoene who puts respect for another goverment's right to decide ahead of US wishes. Do they not know Leon's history? Seriously?

What we learned is that, with the press, always the lazy students. Always the ones who do as little as possible. Attend a hearing? That might tear them from X-Box and what if it ran into lunch? Just grab the prepared remarks, repeat one anecdote from AP or Retuers repeat filings throughout the hearing and call it a 'report.'

All Things Media Big and Small demonstrated yet again that, with the press, it's not the event itself that matters, it's how the press can do the bare minimum while serving the pretense that they covered the event, that they did their job. W

We covered the hearing in Tuesday's "Iraq snapshot," Wednesday's "Iraq snapshot" and today's "Iraq snapshot" and, in the community, at Trina's site, Ava covered an exchange with "Scott Brown questions Panetta and Dempsey (Ava)," at Rebecca's site, Wally covered economic concers expressed over the use of contractors "The costs (Wally)" and Kat offered a look at various claims about the administration's negotiating goals and what Iraqi leaders supposedly sought with "Who wanted what?" And even with all of that, I could still easily cover the hearing again in tomorrow's snapshot with parts that were newsworthy but that we didn't have space of in the snapshots so far.

This was an important hearing. Very few people treated it as such.

The ones who are going to regret ignoring it the most (or focusing on the trivia from it) will be the likes of The Nation, et al. That's because John McCain had an eye on history and was doing his draft. He invoked history in the hearing. So all of these members of the Cult of St. Barack who just knew they were doing him a favor by ignoring it have instead allowed McCain's judgments, calls and, yes, his facts (he did offer some facts) to stand as the official judgment, unchallenged. Unless the world stops spinning sometime in the near future, this hearing will be remembered and it's a real shame the left chose to take a pass on it. It's a shame because Iraqis remain under occupation and they do matter. But 'independent' media never really thought that, they thought only Barack mattered. (Which is why they're okay with Guantanamo and with the assassination of American citizens and so much more.) If they really wanted to defend Barack, they would have paid attention to John McCain's actual remarks and offered some counter-narrative to them. Of course, that would be actual work and they don't work at The Nation, et al, do they?

Last Thursday, ICCC's number of US troops killed in Iraq since the start of the illegal war was 4485. Tonight it remains [PDF format warning] 4486. Here's the screen snap: 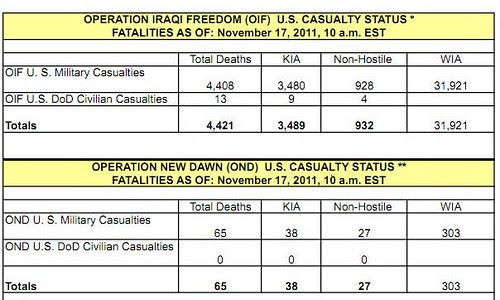 
iraq
i hate the war
the ballet
Posted by Common Ills at 9:06 PM