Yeah, a US delegation is in Iraq -- even if the US media pretends otherwise

"We live in fictitious times," Tim Robbins famously said during the Bush era. He didn't know the half of it. Yesterday's snapshot opened with: "Starting with breaking news out of Iraq, Hossam Acommok (Al Mada) reports a mixture of White House officials and US military officials arrived in Baghdad Friday for a three day visit to discuss a number of issues including to "provide immunity to American trainers." The delegation will meet with President Jalal Talabani and Iraq's two vice presidents, with the prime minister, and with the head of the political blocs. In addition, it will visit the Krudistan Regional Government. Al Mada reports that Rebel cleric Moqtada al-Sadr wasted no time in announcing that, should immunity be granted, his bloc would immediately withdraw from the National Alliance coalition. An MP with the Sadr bloc is quoted declaring that it is not the right of Nouri al-Maliki to provide the Americans with immunity."

I do read the public e-mail account on Saturday and Sunday. Only time -- other than holidays -- when I'm the only one reading it and a number of e-mails are asking, "Was that true?" Or, "If that's true, why wasn't anyone else reporting it?"

It was true. It's what Al Mada reported. I translated that accurately. Your next question should be was Al Mada correct in its report?

And let's prove it with a picture.

Al Rafidayn reports that the delegation met with Jalal Talabani today and they were accompanied by US Ambassador to Iraq James Jeffrey and the top US Commander in Iraq Lloyd Austin -- in the picture above Austin's on the far left, then Jeffrey. Talabani sits in a chair on the far right. Who are the two in the middle? The one closest to Talabani, the one with the grey hair is Dennis McDonough who is currently the Deputy National Security Advisor, a position he's held since October of last year. The other man in the photo? Al Rafidayn states that Antony J. Blinken, who is the National Security Advisor to the Vice President, also met with them. I can't see his face clearly and last time I saw Blinken he had greyer hair. Dark, but it had grey in. Maybe he's touched it up -- not a problem, if he has, not mocking if he has. Just noting, Al Rafidayn says that's who was present and I can't see the face clearly and the hair's a bit darker than the last time I saw Tony.


The picture's not from Al Rafidayn's story, by the way. There is no picture with their story. The picture is from Jalal Talabani's official website (and they say it's Tony as well). 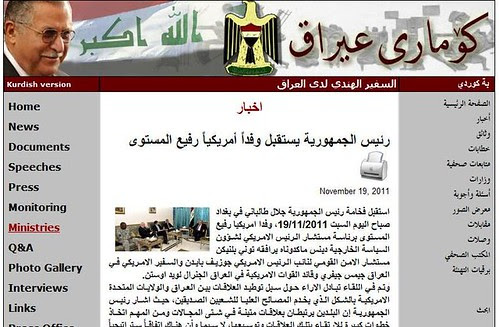 Do you see any big news out of Iraq (there's one thing, hold on for that) today or yesterday?

Does the US media not generally treat US officials visiting another country as news?

Maybe because it takes a lot of lying to keep an illegal war going. But you've got your picture. The US sent a delegation to Iraq. Al Mada's report was correct.

In news of violence, Al Rafidayn reports that a roadside bombing "south of Baghad" targeted US soldiers leaving three injured and that US forces are said to have responded by firing at and killing civilians (two were killed and five were injured). The US military, the paper notes, denies killing anyone. AGI has the same count and states the incident was in Yusifiyah. AFP reports on it here. The New York Times and other US outlets report on it here -- well, here -- no, here. Uh. Okay, they don't report on it at all. Just like the meeting. Seems there are bits of news that some feel the American people need to be kept from.


In other violence, Reuters notes an attack on a Ramadi police checkpoint in which 4 police officers were killed and four more were left wounded, 2 corpses were discovered in Mussayab and a Baghdad bombing left eight soldiers and two civilians injured.

And Al Mada reports that there are rumors that a big split is about to take place in Iraqiya (the political slate that came in first in the last elections, headed by Ayad Allawi) while Al Rafidayn reports that Iraqi forces have confiscated canned goods -- they're canned goods from Japan and said to put the population at risk (due to the nuclear accident in Japan).