Guess what? Another US service member died in the Iraq War. Guess who didn't tell you about it? You know the answer, don't you?

Last Sunday, the number of US military people killed in the Iraq War since the start of the illegal war was 4486. Tonight? PDF format warning, DoD lists the the number of Americans killed serving in Iraq at 4487. 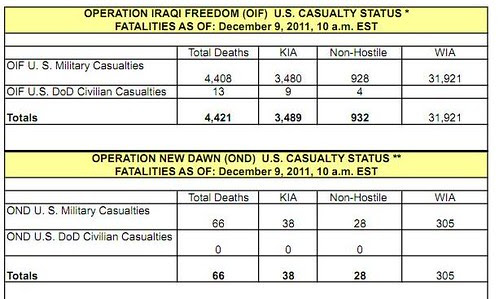 For those who are missing it or too lazy to click on "Last Sunday," here's the snap from last Sunday: 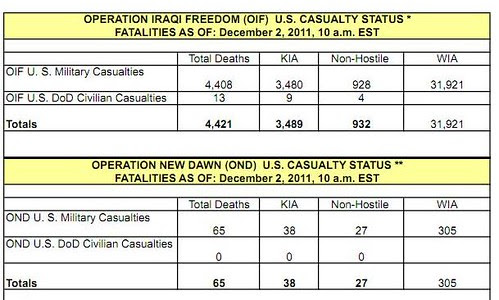 Why didn't the press?

And why didn't DoD issue an announcement?

Would a death mar Barack's victory lap this week? Having just seen Naomi Wolf's laughable The End of America last week, I sure do remember her (righly) condemning Bush for hiding the war dead. She didn't have her facts right. The dead were not being brought in during the dead of night. The White House just refused to allow photos taken. But Naomi was kvetching like she was about to bust a gut. Back then. DoD is again hiding the war dead (again, under Barack -- this isn't the first time it's happened since Barack was sworn in). Where's Naomi Klein?

I just know that as usual when it's time to speak up, Naomi Wolf's no where to be found.

Hey, why couldn't the press tell you the truth? Because they're cheap little whores.
Like Geoff Dyer of the Financial Times of London who insists, "As well as meeting Nouri al-Maliki, the Iraqi prime minister, Mr Obama has a full schedule of military related events which will allow him to tell a country tired of war that the troops in Iraq are coming home, if not quite by Christmas, then by the end of the year."

One US service members is dead that wasn't at the start of the month. You have to wonder how long they're going to bet -- and how much (it would appear their careers) -- that there won't be any deaths in 2012?

All US troops are not leaving the region (that's what "reposturing" means and that is the official term of the US military for what's taking place in Iraq). And all US troops are not leaving Iraq. But they whore and they whore and then they act surprised that no one trusts them, that their reputations -- individually and as a profession -- lie in ruins. Cheap tacky whores turning to tricks in the Beltway. Lying to the people about what's going on. Whoring and letting us see just how much whoring they intend to do for Princess Barack in 2012.

Whoring the way they did to sell the illegal war in the first place.

Isaiah's latest goes up after this.