In 1979's Breaking Away, Dave is obsessed with everything he's not. He doesn't even excel and enjoy the one thing he's good at, bicycle riding, until he comes to terms with who he is and let's go of his obsession with pretending and wishing he was Italian. Accepting who he is turns him into a winner with his friends -- as opposed to racing with the Italians and trying to be them.

So the point is, a kid in Bloomington, Indiana learns there is joy in embracing the world around him instead of lusting after things he's not and never will be. It's a pity Steve Tesich can't write a screenplay that could control events off screen -- with or without Peter Yates directing.

Are you getting the point?

It's been a really sad week for the Guardian. It's not really a news paper becuase it's very rare that it ever actually breaks any news. It just runs left opinion pieces for the most part. Sometimes on their opinion pages, sometimes they pass them off as "reporting."

Remember the Downing Street Memos? That story came from England. Minutes of the war plotting between Blair and Bush?

It took a British newspaper to break that story. Here in the US, we were appalled that US newspapers ignored the story.

But that wasn't just in the US.

The Guardian didn't just not break the story, it failed to even report on it. The Times of London broke the story.

And it's been a very cute week for the Guardian. Do you know they live blogged Barack twice. Live blogged the first day of Nouri and Barack at the White House. Live blogged the Fort Bragg speech. It's really important to them that they document . . . Americans.

Gordon Brown pulled the British troops out of England. Did that get live blogged?

See the Guardian isn't a news paper. It's a rag for the Labour Party. So it failed to lead against the Iraq War -- Tony Blair and Gordon Brown are both Labour Party members. In England, the Labour Party was in charge of the illegal war planning.

All week long, the Guardian's shown a strange and sudden interest in Iraq but all the columns and the live blogging have treated it as the American war. It's really pathetic and ahistorical. It's pathetic that they're such cheap whores they couldn't call out their own party. It's pathetic that the paper's obsessed with the United States. They're just pathetic.

In Breaking Way, Dave's got the excuse that he's just graduated high school. But a paper that's ten years shy of 200?

December 1st, ICCC's number of US troops killed in Iraq since the start of the illegal war was 4486. Tonight it's [PDF format warning] 4487. Here's the screen snap: 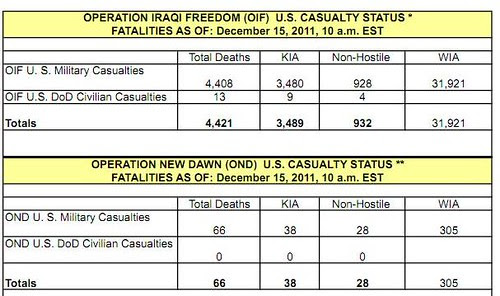 
iraq
i hate the war
the ballet
Posted by Common Ills at 9:00 PM