Asli Aydintasbas (Newsweek) interviews Iraqi Vice President Tareq al-Hashemi and, despite that, still can't get the facts straight in her introduction (the arrest warrant was Monday the 19th after he left Baghdad -- we've done the walk through on that already, if you're late to the party refer to this Al Mada report from today) . Hopefully, she at least quoted al-Hashemi correctly including here:

The U.S. left my country with challenges beyond our capacity to solve. Maliki cannot be part of a solution. We [Sunnis] cannot reach a reconciliation with Maliki anymore. Anyone else could replace him within the Shiite national alliance. But it has to be someone who believes in rule of law, the future of [Iraqi] institutions, and power sharing.

What's he talking about? Tareq al-Hashemi went to the KRG on business, the day after he arrived, Nouri al-Maliki has an arrest warrant sworn out on him. He currently remains in the KRG, a house guest of President Jalal Talabani. Along with targeting the vice president, Nouri is demanding that Deputy Prime Minister Saleh al-Mutlaq be stripped of his duties. Nouri heads the political slate State of Law which came in second in the 2010 elections. Iraqiya, headed by Ayad Allawi, came in first. al-Hashemi and al-Mutlaq are both members of Iraqiya. As is Finance Minister Rafe al-Essawi whom Jack Healy and Michael R. Gordon (New York Times) profiled in yesterday's paper. al-Esawi states, "Maliki now wants just to get rid of his partners, to build a dictatorship. He wants to consolidate power more and more. Someone else should be prime minister." The reporters note that Nouri has already tried to dismiss al-Essawi from the Cabinet however the other ministers refused to go along with it. Alsumaria TV reports:

Yesterday Nouri appeared in public. Hossam Acommok (Al Mada) reports that he declared a lot of nonsense about Iraq needing to come together as one while also demonizing Tareq al-Hashemi. While Nouri felt free to assemble in Baghdad, he refused to allow the Communist Party to hold their planned celebration (of the end of the US Status Of Forces Agreement) in Tahrir Square. Remember, 'free' Iraq really just means that Nouri has the freedom to do what ever he wants, not that anyone else in Iraq has any freedoms. As Salah Nasrawi (Ahram Online) explains:

An Iraqi version of the Arab Spring flourished briefly in Baghdad but soon came to an end, in part because of intimidation, crackdowns and curfews that prevented demonstrations from spreading nationwide.
For weeks, young protesters demonstrated in Baghdad's Tahrir Square for democracy and to demand civil and political rights, and to protest against government corruption and unemployment and the lack of basic services like clean water and electricity.
The demonstrations grew out of a day of protests on 25 February, known as the “Day of Rage,” in which thousands of Iraqis took to the streets before they were brutally beaten by security forces and assaulted by government-sponsored mobs.
One of the organisers, Hadi Al-Mahdi, a journalist, filmmaker and playwright, was later shot in his Baghdad home by assailants using pistols outfitted with silencers.


And the above is why I say Mahboob A. Khawaja (RAWA) is wrong (for now) about Iraq when she declares, "The people of Iraq and Afghanistan need change for peace and normalcy. The change can only happen if the US led occupying forces after the withdrawal would compensate the victim nations and rebuild their essential social-economic and humanitarian infrastructures destroyed by the ferocious wars." Compensation paid to whom? The US government is not going to issue checks to 26 million Iraqis (the number is higher if you count refugees). So who gets the money? Nouri?

Nouri announced more cuts to the rations and Iraq saw inflation again this year. But he spent billions on machines of war. So the US government should give Nouri a check so he can turn around and give it back to the US government to purchase more fighter jets and other weapons? Is that how it's going to work?


Mahboob A. Khawaja is smart and probably rightly realizes that in two or three years, calls for compensation or going to be dismissed with, "That was forever ago. Let it go, let it go." But currently, there's no one to give the money too. Nouri al-Maliki is prime minister in spite of his slate coming in second, in spite of the will of the people, in spite of the Constitution. Setting aside the fact that his record indicates any money would go to weapons, there's the fact that he is not a true representative of the Iraqi people. Claiming he is would be the same as claiming George W. Bush won the 2000 election.

He's a fraud. I don't dispute the idea of compensation but it can't happen while Nouri's in power. (And I realize Nouri may be in power for many years to come.)

Last Sunday, the number of US military people killed in the Iraq War since the start of the illegal war was 4487. Tonight? PDF format warning, DoD lists the the number of Americans killed serving in Iraq at 4486. Here's the screen snap. 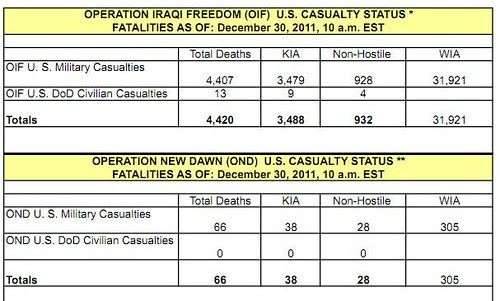 If only the Weekly World hadn't gone under, they could break the news that Pentagon says fallen comes back to life! And here's last week. 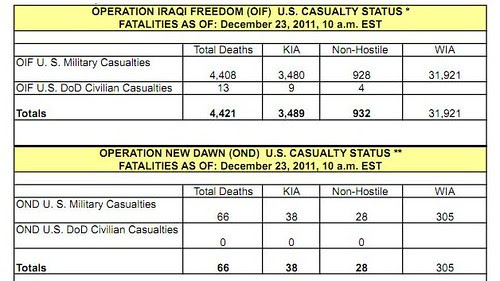 What's most interesting is that the 'returned' fallen? Not from Operation New Dawn. That's what Barack rebranded the war as on September 1, 2010. The number was subtracted from Operation Iraqi Freedom.

Back to the political crisis. Hossam Acommok (Al Mada) reports that despite Nouri's efforts to move towards a majority government (meaning blocking out minorities) members of Dawa (Nouri's political party) are reportedly against it and other components of the National Alliance are saying "no" as well. Moqtada al-Sadr's bloc is among the groups making up the National Alliance and Sadr MP Jawad Jubouri is stating that Moqtada will not attend the national conference that Jalal Talabani has called. Earlier, Iraqiya had stated that they would not attend if Moqtada didn't attend so if he sticks to not attending, the conference may end up being called off. As for Iraqiya in the news cycle, Aswat al-Iraq reports:

Iraqiya spokeswoman Maysoon al-Damalouji said today that her bloc "is under a media campaign organized by some quarters to defame its national projects and members".
She did not name these quarters, but charged them with defamation of her block.
In a statement, she added that these quarters are using weak elements or did not win in the previous elections for these ends.

And, as 2011 drew to a close, Alsumaria TV reports the weirdest incident/issue/person in Wasit Province was a 10-year-old boy who baffled everyone with his addiction to gasoline. Oh, he huffed it? No, no, no. This is not a huffer. The television station reports Hussein Alwan drinks gasoline. His father is quoted stating, "Since four years, my son disappears sometimes until we caught him once stealing gas and drinking it from parked vehicles." The boy claims he now drinks gasoline every day.