The fact that Reuters stopped reporting on daily violence in Iraq last month didn't mean the violence stopped. Alsumaria TV reports a TV broadcaster was killed by a sticky bombing in Tirkit yesterday. In addition, they note the Hilla home of one of Grand Ayatollah Ali al-Sistani was bombed today and the iman of one of the al-Sistani mosques in Diwaniya Province was injured today when assailants attacked it firing machine guns.

In other violence, the western press ignores Nouri's own Uday-like son and all the money looted from the Iraqi government while the Iraqi people suffer. Yesterday came the estimate of at least 5.5 million Iraqis living in poverty. Al Mada reports today that a number of the unemployed have taken to panning the Tigrist and other rivers in hopes of finding gold, silver or any precious metal. For those who've forgotten, jobs were another one of the demands Iraqis made last year when they took to the streets. Presumably, Nouri's still 'working' on that issue.

Like its western counterparts, Al Rafidayn takes stenography for the Deputy Prime Minister of Energy Hussein al-Shahristani as he asserts that the Kurds are diverting oil to Iran. Alsumaria TV reports the Kurdistan Alliance is accusing al-Shahristani of declaring war on them and they are calling for him to apologize to the Kurdish people for his accusations. They deny that they are smuggling oil to Iran.

Nouri's government is also engaged in a war of words with the government of Qatar over Iraqi Vice President Tareq al-Hashemi's visit to the country. (Nouri wants the Vice President arrested.) Yesterday the Deputy Prime Minister of Energy al-Sharistani -- who apparently believes his title is much more elastic than it would appear to be -- declared that Qatar should hand over al-Hashemi. It was never going to happen. But Nouri and his minions have their answer today. AP is reporting that Qatar's State Minister Khaled al-Aiityah has stated that they will do no such thing.

In other news, Alsumaria reports that Minister of Planning and Development Ali Shukri declared that Iraq's budget depends 92% on oil and that they need to diversify and find other avenues for income. Oh, that's related news. Because Tareq al-Hashemi has been publicly making that point since 2009.

Iraq's been in political crisis for over a year now. Since December 21st, President Jalal Talabani and Speaker of Parliament Osama al-Nujaifi have been calling for a National Conference. Supposedly that will take place tomorrow. Hevidar Ahmed (Rudaw) reports that Iraqiya's Haidar Mulla states they "will only paticipate in the convention if the Erbil Agreement is implemented and the security posts are finalized beforehand." The three security ministries -- Ministry of the Interior, Ministry of the Defense and Ministry of National Security -- were supposed to be named by the end of December 2010. That was how Nouri al-Maliki would move from prime minister-designate to prime minister -- per the Constitution. Instead, he was moved without naming a full Cabinet and those posts remain empty all this time later, have never been filled while violence has increased in Iraq.

By not filling them, Nouri controls them. He ignores the Constitution and declares someone 'acting' minister. Then they do what he tells them or he fires them. If he nominated someone for the post and the person was confirmed, Nouri could not fire them. He would not Parliament's backing. Since December, he's been trying to strip Deputy Prime Minister Saleh al-Mutlaq of his post. Thus far Parliament has refused to go along with him so al-Multaq retains his post.


Muayad Taiyb, spokesperson for the Kurdistani bloc in Iraqi Parliament, believes Barzani is avoiding the convention because he believes it won’t solve anything.
“Massud Barzani is not hopeful about the results of the convention; that’s why he will not participate in it.”
Mulla believes that Barzani’s decision to not attend the convention will affect the positions of other political leaders.
“If President Barzani does not participate in the convention, then neither will Alawi,” he said. “Massoud Barzani is a key figure in the political process in Iraq. His absence at the convention will make it have no value.”
The State of Law Coalition has left many political issues unresolved with the Kurdistan Region and the Sunni-dominated Iraqiya bloc.
Taiyb says, “The State of Law bloc has issues with both the Iraqiya bloc and the Kurds. The convention is meaningless without Iraqiya’s participation because the main issues in the political process in Iraq are between Iraqiya and the State of Law.” 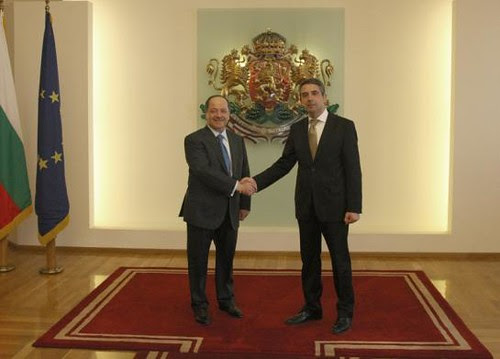 President Barzani met President Rosen Plevneliev and talked about the many cultural and historical similarities that the people of Kurdistan and Bulgaria share.

“Our peoples have much in common. Both our peoples emerged from years of suffering under totalitarian regimes and are now living in freedom. We can learn much from each other and we are prepared to establish strong cooperation with your country,” said President Barzani in his meeting with President Plevneliev.

The Bulgarian President highlighted his country’s recent participation in the liberation of Iraq from Saddam Hussein’s regime, and both sides discussed the development of further economic cooperation between their peoples.

President Barzani thanked the people and government of Bulgaria for their role in freeing the Iraqi people from the former regime, and he extended a formal invitation to the Bulgarian President and Prime Minister to visit the Kurdistan Region.

“We would like to establish a strategic relationship with the Kurdistan Region, and to this end, we are prepared to work with you in a number of areas. We will encourage Bulgarian companies to explore trade and investment opportunities in Kurdistan and through Kurdistan as a gateway, in the rest of Iraq” said Prime Minister Borisov, hailing the stability and economic potential of the Kurdistan Region.

President Barzani said that the Kurdistan Regional Government (KRG) is equally keen to establish strong ties with Bulgaria and it invites Bulgarian firms and investors to explore opportunities in Kurdistan.

Both sides agreed on the need for follow-up meetings by field experts and further visits between officials from both sides, in order to further explore areas for mutual cooperation.

In a meeting with the Bulgarian Foreign Minister Nickolay Mladenov and other officials from the Ministry, Minister Mladenov said that Bulgaria has decided to reopen its embassy in Baghdad and it will also open a consulate in Erbil in 2012 to help strengthen ties.

Several KRG officials joined President Barzani on this important visit, including the General Director of the KRG Security Protection Agency, Masrour Barzani; the President’s Chief of Staff, Dr Fuad Hussein; the Minister of Natural Resources, Dr Ashti Hawrami; the Head of the KRG Department of Foreign Relations, Minister Falah Mustafa; and the Chairman of the Kurdistan Investment Board, Herish Muharam.

President Barzani’s delegation also met the Speaker of the Bulgarian Parliament Tsetska Tsacheva and with a number of other officials and representatives of both public and private institutions.

The President visited the Iraqi Embassy in Sofia to meet with the Iraqi Ambassador and members of the local Kurdish community. He attended a lunch with a number of other ambassadors from the Middle East and discussed the political situation in Iraq and recent developments throughout the region.

The delegation ended its two-day visit to Bulgaria on Friday and travelled on to the United States to meet President Barack Obama and other US officials this week.