Kat's Korner: Falling in (and out of) love with M. Ward 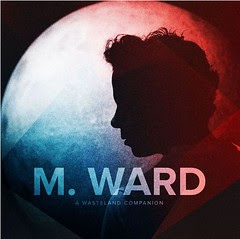 Kat : I'm a sucker for any album that makes me feel like the singer is singing just to me. Which may be how M. Ward finally managed to hook me with A Wasteland Companion's opening track "Clean Slate" featuring a lovely tune played on acoustic guitar with his half-singing, half-whispering:


When I was a younger man, I thought that pain and defeat Would last forever But now I don't know What it would take to make my heart back down Because I only have to wait a little while Before I Get myClean slate
A Wasteland Companion is Ward's eighth solo album (seventh studio) and he's also part of Monster Folk and half of She & Him. He's closing in on forty and if he's going to get any bigger before he hits his late sixties, it has to happen quickly. He had to know the odds before he recorded this album.

Which makes it a real shame that he's produced yet another over-stuffed, fussed over sofa when a work bench was the project required. Maybe the problem with being immensely talented is that you never know -- and nobody ever tells you -- when it's enough?

After the solid opening that probably every male folk-rocker and folk-rocker wanna be would give their left nut for, M. Ward is off to the races. There is no transition from the first to second track ("Primitive Girl") as you move from the shared confession to a song whose bouncing musical figures have you picturing Susan Dey onstage in Laurie Partridge vest and bell bottoms pounding away on the electronic keyboard. It's a jarring move and the song's over before you've quite figured out whether it was a bold move or a boneheaded move? "Me and My Shadow" kicks off next with Ward's voice sounding like it's being run through a fuzz box but, just as that sound grows on you, it vanishes and is quickly replaced with a faster rhythm, too many instruments, backing vocals and feels like one of the worst attempts to ape Bob Dylan's "Hurricane" ever made.

But, of course, it's not enough that it be a Dylan sound-alike, he also has to include 'shout-outs' from a variety of other artists (including Richard Thompson with the constant repetition of "Shoot out the lights"). "Sweetheart" wants to be Brian Wilson, White Motown and includes the curdling vocals of Zoey Deschanel. Wince as the TV star (and other half of He & She) sings "love" and hits "ours" in the (badly worded) line "such as ours!" Marvel over the fearlessness with which she hollers "Oh my love" repeatedly and off key every time. What she's doing isn't signing, it's caterwauling.

Then we're off into "I Get Ideas" which is far more confessional than M. Ward probably realizes. The chorus tells you that he gets ideas about sleeping with you. The verse lyrics really don't match and the music convinces you that M. Ward gets no "ideas" if, by "ideas," we mean original thoughts. What he does, however, get, is the urge to rip off others. Around about the time you're bored hearing the opening notes of Elvis' "Jailhouse Rock," you're wondering if M. Ward speaks French and, if so, does he understand the difference between homage and copycat?

For example, Young Frankenstein? Mel Brooks' comedy can be considered a homage. But when we get to High Anxiety, we've arrived in the land of rip-off, Spoofville population: Too many.

From out of nowhere, Ward's "The First Time I Ran Away" comes up and he's (re)crafted it so beautifully that you listen uneasy for the Zoey screeching or his need to bring in a Kris Kristofferson vocal or some other rip-off. Sadly, the track is over far too soon. Fortunately, it's over before he can mess with it.

The same cannot be said for the title track which leaves you wondering whether he was attempting to copy Randy Newman or parody him? If it's the latter, after Family Guy's definitive send-up of Newman in "Da Boom," repeating the move is pointless. And pointless pretty much describes "Watch The Show" a thundering number bathed in the obtuse.

And that makes it all the more infuriating that he's got something to say and says it well in "There's A Key" -- though he could have dropped the vocals and featured a piano played prominently since he keeps singing about a key on a piano. And expect to be outright mad when "Crawl After You" kicks off because not only do we finally have the piano, we also have a strong song, a brilliant track sung perfectly -- including the right amount of desperation and exhaustion when he sings, "So I cannot be counted on to lie here and casually watch as you go walking by." "Wild Goose" and "Pure Joy" quickly follow.

With "Clean Slate," "The First Time I Ran Away," "There's A Key," "Crawl After You," "Wild Goose" and "Pure Joy," M. Ward could have had an album, one that held together. But instead, he's like some wanna-be dancer-singer-actor-comic going all out for a Smash audition when, in reality, he's being asked to play the role of the boy next door, less showy but far more relatable.

Far too often, he destroys his own album by refusing to be bound by theme or genre and rushing to show you yet another trick he can do and then just one more and then another and then . . . Send the child to bed already, we get the message, he learned to play an instrument.

Did he get the message that there is a difference between leaving someone entertained or leaving them exhausted?

Simplify. If he'd merely done that the six solid tracks could have been joined with compatible recordings of the other six songs. Or maybe he's not interested in pursuing that genre, maybe the other six with their uncredited ode to Ethel Merman's body of work is where he wants to step out? Fine, make that album. But stop half-assing it by refusing to make a genuine album. Until then, he should continue to expect his career to be little more than a series of one-night stands with audiences. He had me with the first song, he lost me by the third.