Did you hear about earlier today?

The New York Times website and the Washington Post went down and are still down.  As you can imagine, this is resulting in non-stop coverage, an attack on a free press.  Reporters Without Borders has rightly labeled this censorship.  Some are wondering if it's government censorship?

Regardless, this is the story dominating the news cycle . . .

And, as usual, the press ignores it.

Here's the screensnaps of both.  Al Mada first, then Kitabat. 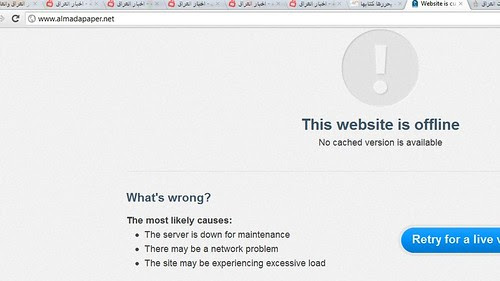 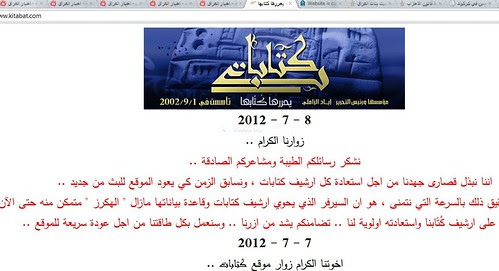 Kitabat thanks its readers for the e-mails of support and they're attempting to get a new server up and going where they will attempt to archive past articles.

They explain that Thursday their site was attacked and has been down since.   They thank their readers for their patience.  They note their e-mail address is kitabat@kitabat.com.

Al Mada's been down about that long.  They went down Wednesday.  For Al Mada, the attacks are nothing new.  They began in 2010 and became a regular occurrence.  By the summer of 2011, they could count on being down for at least one day a month.  Then the attacks became more frequent and they were down for approximately a month.  As they came back online last week, they thought they'd found an answer.  They were now using CloudFlare.

Not only has that not prevented attacks, it hasn't prevented successful attacks.

And as is becoming frightfully consistent with these attacks, the world press doesn't care.

Somehow, when it happens in Iraq, it just doesn't seem to matter to the world's press.

These are attacks.  And the attacks don't go to Al Sabaah, for example -- a paper that prints pretty much what Nouri's government wants it to.  It happens to the outlets that bother to report on the issues that effect Iraqi lives.  (Dar Addustour was down for one day last week, to cite another example of how the attacks are aimed at outlets that refuse to just be megaphones for Nouri.)  It happens over and over and it is an attempt to censor.  It is an attempt to shut down a free and lively press.

May 25th, Al Mada reported on how their website was experiencing daily attacks causing the site to crash.  They were down for the entire month of June.  When they came back up last week (they came up on Thursday, June 28th, they were able to add new content Friday, June 29th), they really hoped CloudFlare was going to help.  But it hasn't.  They've been down since Wednesday.

And despite the Twittering class of the foreign press in Iraq, despite their love for social media, they can't take a moment to express one damn bit of regret that the Iraqi press continues to be under attack.  They can offer garbage about plastic surgery and other crap but as repeated attacks take place on the Iraqi press, they can't say one word.  They can't?  Try they won't.


But you better believe that if an when something happens to their work or to them, they'll want the eyes of the world following every detail.


The number of US service members the Dept of Defense states died in the Iraq War is [PDF format warning] 4488.


iraq
i hate the war
the ballet
Posted by Common Ills at 6:01 PM