Kat: In the fall of 2010, Heart released their glorious Red Velvet Car and I thought it was incredible and assumed it was a nice footnote to their career.  Was I ever wrong.

Not because sisters Ann and Nancy Wilson are back out on tour, though they are (NYC Wednesday, for example), and not because their new album, Fanatic, drops Tuesday but because, damn, Fanatic. 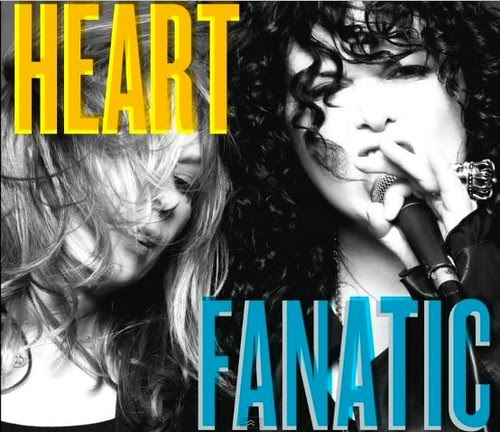 It blows you away.  Red Velvet Car stands with the best of Heart albums but Fanatic is something altogether different.  It blows Dreamboat Annie, Little Queen, etc. off the map.  What group can make the claim that, decades after they started recording, they release the album that blows all the rest away?

And we're talking about rock classics.  Those first four albums, for example, Dreamboat Annie, Little Queen, Dog & Butterfly and The Magazine, are rock staples.  And though they're rightly considered classics now, they were huge rock albums in real time, and, in real time, they were competing for attention with the likes of Led Zeppelin's Physical Graffiti, Presence and In Through the Out Door.  Against Zeppelin and other of rock's heavy hitters, Heart held their own.  So these were not minor albums.

Leave it to Heart to surprise us all with something new that blows away their canon.


"59 Crunch" finds Ann and Nancy trading lines and throwing down hard.  The whole album is basically a throw down, even in the softer moments.  "Million Miles" throbs and glistens while also making a nod to the Hedy West classic "500 Miles."  The sonic landscape that is "Mashalla" is sculpted in such a way that it always seems about to drop you but instead carries you along.  And can anyone hold out "remain" like Ann or give it such depth and angst?

"Dear Old America" -- dealing with PTSD and other issues -- reminds that social commentary is at its best when it's a part of a song and not the whole purpose (Ani DiFranco, take note). "No one knows what this is all about now," Ann observes in this song that's actually working on several levels though I fear the most literal minded will only grasp the nod to today's victims of PTSD and to Ann and Nancy's father.  "Dear Old America" and "Fanatic" especially remind that Heart is a rock band -- not a singer fronting a pick up group for a tour or two.

"Fanatic" is an amazing track on an album full of them.  When Ann sings about being a fool for love, the music rumbles in a way that reminds you rock is always at its best when exploring notions like freedom and power.  And it's these heavy tracks that make you remember why rock ever mattered to you in the first place.

And it's these heavy tracks that make the sweet "Rock Deep (Vancouver)" and  "Walkin' Good" all the more lovely.  On the latter, when Ann comes in on the chorus and when Sarah McLachlan joins the sisters, it's musical nirvana.  In fact, were I given a wish from some magic lamp and told I could make one change to this album, the only thing I'd do would be take this track from number three and make it the album closer.  That's my only carp for Fanatic, the greatest Heart album of all time.  At least until they next hit the studio.  In other words, I've now heard the best album of 2012 and it's Fanatic.


Anyway, I'm okay
Day into night and night into day
Gone so far away from my home
Take the high road and damn the low